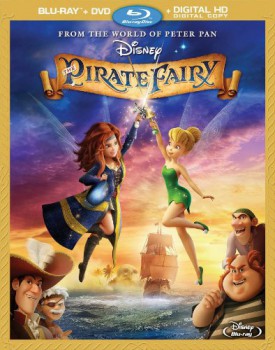 In 2006, Disney announced that they were working on a direct-to-video film starring Tinker Bell, a concept that almost instantly upset many fans. As more details about the film were revealed, including casting Brittany Murphy as the feisty fairy and the decision to make the films using computer animation, popular opinion was that Disney should not proceed with the concept. However, Disney had already started the franchise through a book series and merchandise line and retailers were pressuring Disney to get the film made, especially since they already had much of the merchandise on shelves without a product to help push it.

Enter John Lasseter, who became the head of Disney Animation when the company purchased Pixar Animation Studios that same year. The originally planned release date for Fall 2007 was pushed back to 2008 to give them more time to improve the quality of the film. After multiple scripts and multiple directors and recasting of main characters, Disney released Tinker Bell which fans were surprised to find wasn’t as bad as they expected and was a decent beginning for the series.

Flash forward seven years to present day when Disney is releasing the sixth film in the series. Beginning with Secret of the Wings in 2012, Disney dropped Tinker Bell’s name from the titles in an effort to broaden the appeal of the films. Marketing for the new film drops the Disney Fairies brand entirely, instead highlighting it as “From the world of Peter Pan.”

The Pirate Fairy is the first film in the Disney Fairies series to not include the Disney Fairies logo, which has been replaced with a DisneyToon Studios logo before the film. Zooming in on Never Land, we find Pixie Hollow and are immediately introduced to a dust keeper fairy named Zarina, who questions authority and wants to explore all of the potentials of pixie dust. She begins experimenting in secret, mixing blue dust (introduced in Tinker Bell and the Lost Treasure) with gold pixie dust and other elements. When her experiment goes awry and destroys some of Pixie Hollow, Zarina runs away. 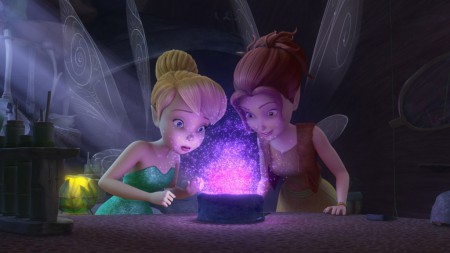 One year later, Pixie Hollow is celebrating the Four Seasons Festival, during which Zarina returns as a pirate and uses her engineered dust to put everyone to sleep… except Tink and her friends, who were hiding in an enclosed float for their grand entrance at the festival. After realizing that Zarina stole all of the blue pixie dust, which the fairies need to survive, the girls chase after Zarina.  When they get close to stopping her, Zarina slows them down by using her dust to change their talents, meaning every fairy now has to relearn how their magic works.

When they finally meet back up with Zarina, they discover her on a pirate ship leading a crew of men who are set on using the pixie dust to make their ship fly. One of the pirates named James pretends he can understand the bell sounds that Zarina emits when giving commands. But once Zarina uses the blue pixie dust to create yellow dust for the pirates, James turns on her and takes over as captain of the ship. Now it’s up to Tink and her friends to free Zarina and help her take back the pixie dust from the pirates to stop them from becoming unstoppable in a flying ship. 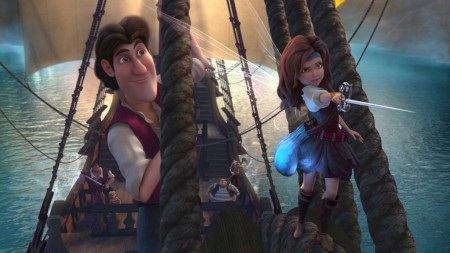 Compared to the other films in the Disney Fairies franchise, The Pirate Fairy is a strong addition to the series. It’s not as heartwarming or memorable as Secret of the Wings, but it’s a fun adventure that pits fairies against pirates and introduces more characters from Peter Pan. If Marvel Studios has taught us anything, it’s that you shouldn’t stop a movie when the credits start to role. Fans of Disney’s 1953 classic will be in for a treat if they wait for a mid-credit tag.

Setting sail on June 1st, 2014, The Pirate Fairy is available in a Blu-Ray/DVD/Digital HD combo pack as well as a stand-alone DVD release. Internationally, the film is known as Tinker Bell and the Pirate Fairy where it was released theatrically on February 14th in 3D. Secret of the Wings was released on 3D Blu-ray, but similar to Frozen Disney has decided not to treat US consumer to the multi-plane version of The Pirate Fairy on Blu-Ray (it can be found digitally in 3D on Vudu and the PlayStation store). 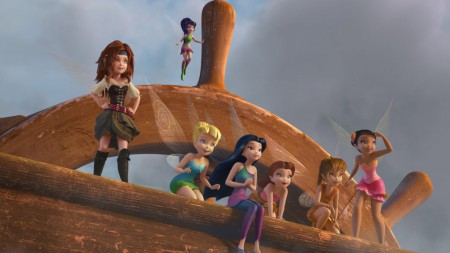 The film is presented on Blu-Ray in 1080p in the widescreen TV aspect ratio (1.78:1). Colors are bright and every detail shines in this transfer, which is free of defects.

The standard definition DVD loses some of the visual luster presented on Blu-Ray. Colors seem diluted in comparison. Background items that are highly detailed in high definition feel soft and out of focus at times. However, if DVD is what you’re used to you won’t have any problems with the presentation offered here.

Audio options on DVD are English 5.1, French 5.1, and Spanish 5.1 (all are Dolby Digital). The same subtitle options are found on this disc as well.

Legacy – The Pirate Fairy Behind the Scenes on Disney Video

The Frigate that Flies – The Pirate Fairy BTS on Disney Video

If DVD is still your preferred method of watching movies, the only bonus features included on that disc are Croc-u-mentary and the Animated Shorts. All other bonus features are exclusive to the Blu-Ray disc.

The disc opens with trailers for Legend of the Neverbeast, Sleeping Beauty Diamond Edition, and Maleficent. The menu features Zarina on her pirate ship staring off towards Skull Rock with some other characters flying by. A pirate sword appears underneath the menu option selected. Selecting “Sneak Peaks” provides additional ads for Disney Movie Rewards, Sofia the First on Disney Junior, Disney Infinity, and Adventures by Disney – Norway.

The dual-disc Blu-Ray case is housed inside a holographic embossed slipcover. The cover features Zarina and Tink clanking swords and their wings contain a glittery overlay. Inserts inside the case are for Disney Movie Club and Disney Movie Rewards, which features your code for your Digital Copy + as well. When redeeming your code, you can also redeem a free (plus $3.22 shipping) blue pixie dust brush, which you can “Sweep on for a sparkling fairy-like glow.” You can also redeem a free (plus $3.06 shipping) four-lithograph set if you have also redeemed a code from Frozen.

The DVD and Blu-Ray discs are the standard grey and blue that we have come to expect from Disney. No disc art is anywhere to be found inside the case.

The digital copy is redeemable through your choice of iTunes, Vudu, Amazon Instant Video, Google Play, or Target Ticket. I redeemed my HD copy through iTunes, which doesn’t come with any bonus features.

The Pirate Fairy is a fun adventure film with characters we have come to love through the previous films in the franchise. Fans will be delighted to find that Disney has given the film more bonus features than we were treated to for Frozen and Saving Mr. Banks, but 3D adopters should be disappointed to find that Disney has made a conscious decision to not let you experience the film in 3D at home on Blu-Ray.

The Pirate Fairy is available to preorder from Amazon. 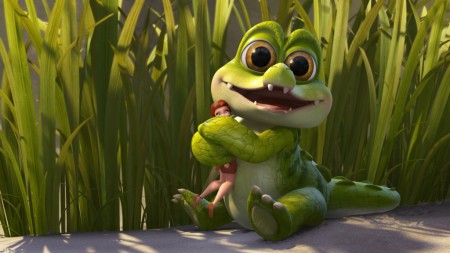