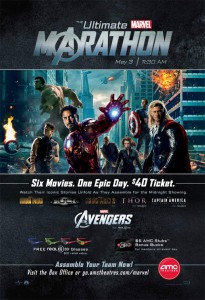 One of the biggest movies of 2015 is guaranteed to be Marvel’s Avengers: Age of Ultron and in anticipation of this epic blockbuster, we’ve assembled two action-packed days of meals and films dedicated to each phase of the Cinematic Universe. The inspiration for this concept came to me in 2012 when Doobie and Fanboy gathered at an AMC for a movie marathon of films leading up to the premiere of Marvel’s The Avengers. This collection of six films became known as “Phase One.”

AMC spread the films out with breaks in between, which are important because watching six films in one day is way more exhausting than it sounds, but it’s also ridiculously fun. I’ve planned this schedule with breaks between films that allow you to stretch. I personally recommend making as much as possible in advance to avoid feeling like Loki trapped you in the kitchen working all day. I made all of the meals the day prior and reheated them day-of. 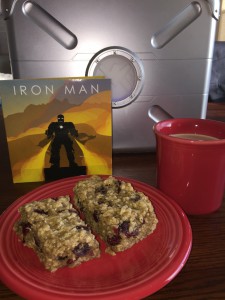 Breakfast is the most important meal of the day and these bars are rich in iron, making them perfect to start the morning while watching Iron Man. They go great with coffee or orange juice. Makes 12 bars and takes about 35 minutes to make. (Inspired by a recipe from food.com)

Preheat oven to 325 degrees and spray a 7×11 or 9×9 pan with non-stick spray. In a small bowl, mix the banana, canola oil, egg white, sugar and maple syrup. Mix oatmeal, flour, baking soda, salt and pumpkin pie spice in a large bowl. Pour the wet ingredients into the large bowl and gently mix it all together. Stir in Craisins and pat into the pan. Bake 22-24 minutes. Allow to cool before cutting into bars and serving. 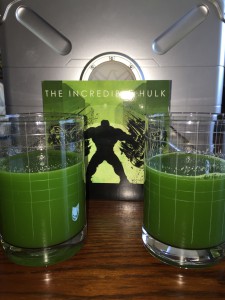 This citrus-veggie drink is full of nutrients that are very healthy for you, and the extreme veggie/fruit mix will make you feel like you’re going to Hulk-out yourself while watching The Incredible Hulk. Please don’t get angry. Makes 2 servings. (Inspired by a recipe from Food.com)

Wash all ingredients. The recipe is intended to be made in a juicer. If you don’t have one, you can do it in a blender as well (this is what I did). To prepare in a blender, first add the pineapple juice, then cut up the cucumber, celery and apples. Tear the kale into smaller pieces and add to the blender. Run it until well blended and then pour it through a sieve into a bowl. There is a ton of pulp that you want to remove to get to just the juice. 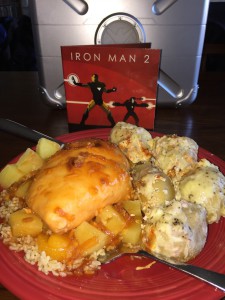 Tony Stark’s new assistant in Iron Man 2 turns out to be Natasha Romanoff, aka Black Widow. This lunch menu is inspired by her Russian heritage with a Russian take on sweet & sour chicken plus some Romanoff potatoes. Both items take about 45 minutes to make, but they can be done at the same time since they cook at the same temperature in the oven. Makes 6 servings of the chicken and 4 servings of the potatoes. I recommend preparing brown rice to serve the chicken over. (Chicken and potatoes inspired by recipes from Food.com)

Preheat oven to 350 degrees. Spray a casserole dish with non-stick cooking spray. Place chicken breasts on the bottom of the dish. In a small bowl, combine the hot water and onion soup mix until well blended. Then add the marmalade and salad dressing, stirring until well mixed. Pour the sauce over the chicken and bake for 30 minutes (or 35-40 minutes if cooking them with the potatoes). Place the fruit over brown rice and the chicken on top of the fruit.

Preheat oven to 350 degrees. Toss the potatoes in the sour cream, onion, garlic and spices. Place in a baking dish and sprinkle cheese over them. Cook for 30 minutes or until potatoes are tender (35-40 minutes if cooking with the chicken). 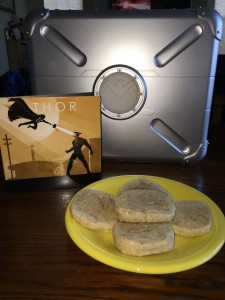 “This cookie! I like it! Another!” I imagine this is what Thor would say if he tried this traditional spice cookie from Norway. Marvel’s Thor character is based on Norse mythology, so it seems only fitting to have a Norwegian snack during the film. They can be made round or cut with a cookie cutter. Power to you if you have a lightning-shaped cookie cutter. When you include allowing the dough to set and cooling time, the cookies take about two hours to make. Makes about 32 cookies. (Inspired by a recipe from Food.com)

Combine flour, cinnamon, ginger, cloves, salt, nutmeg and cardamom in a bowl. In a separate bowl, beat the butter and sugar together. Add the eggs and vanilla and beat until blended. Stir in the flour mixture until it becomes dough. Roll the dough into a long roll and cover with cling wrap, refrigerate for 1 hour.

Preheat oven to 350 degrees. Slice the roll of dough into individual cookies (should be about 32) and place them on an ungreased cookie sheet (or roll dough ¼ inch thick and cut out cookies with a cookie cutter). Brush each cookie with the egg white mixture and bake until they harden and turn slightly gold, about 10-15 minutes. Cool on a wire rack. 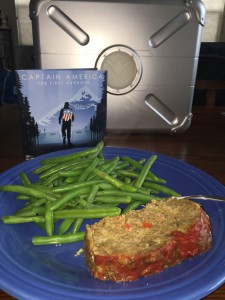 Captain America: The First Avenger takes starts in New York during the 1940’s, so dinner has to be all-American. This meal is really inspired by the next decade and comes from a restaurant at Disney’s Hollywood Studios called the 50’s Prime Time Café. This meatloaf is delicious and I recommend serving it with a side of green beans. The recipe comes from Cooking with Mickey and the Disney Chefs. It takes about 90 minutes to make and serves 8 (I cut the recipe in half for my smaller crowd).

Preheat oven to 350 degrees. Spray two 8 ½ by 4 ½ inch loaf pans with non-stick spray. Use a large bowl to combine the beef, pork, eggs, bread crumbs, onion, bell peppers, peppercorns, salt and 2 tbsp Worcestershire sauce. Divide the meat in half and press into the two loaf pans. Bake for 50-60 minutes. In a small bowl, mix the ketchup, brown sugar, mustard and remaining Worcestershire sauce. Smooth the topping onto both loaves and back for 10 more minutes. After removing the loaves from the oven, allow them to rest for 10 minutes before serving. 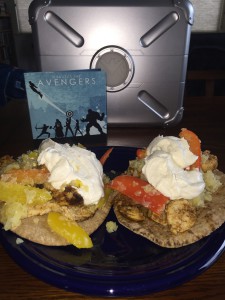 There’s only one food appropriate to eat during Marvel’s The Avengers. “Have you ever tried shawarma?” asks Tony Stark at the end of the film. “I don’t know what it is, but I want to try it.” Skipping dessert, we move right into fourth meal with a late-night shawarma snack (if you really need dessert, there should be some leftover cookies from Thor). (Inspired by a recipe on Food.com)

Combine the coriander, cumin, cardamom, chili powder, paprika and grill seasoning in a small bowl. Squeeze the juice from half a lemon and add to the bowl, along with garlic and 3 tbsp olive oil. Stir until it becomes a paste and coat the chicken with it. Cook the chicken on a grill set to high heat for 6 minutes on each side, or until cooked through. Remove from the grill and let the meat rest for at least 10 minutes before slicing thinly.

Heat 2 tbsps olive oil in a skillet until it starts to bubble. Add the onion and peppers and cook, stirring frequently for 5 minutes.

In a small bowl, combine the juice from the other half of the lemon, Tahini, Greek Yogurt and a little bit of olive oil. Grill the pita pockets for one minute on each side to warm them. To serve, place chicken on top of each pita, top with veggies and Tahini.

If you enjoyed this menu, check out Phase Two (so far).