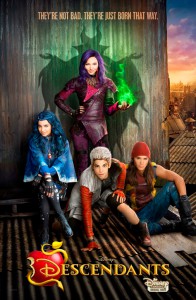 Disney Channel is on a role when it comes to their recent Disney Channel Original Movies this year! I was blown away by Teen Beach 2′s twisty ending and was really impressed by Bad Hair Day, but I was a little worried about Descendants. My concerns were a mix of casting choices and fear that the portrayal of classic Disney characters would be botched, but it turns out I had no reason to be concerned.

Imagine a fairy tale world where all of the villains were banished to an island without magic while the heroes lived in peace on the mainland. After twenty years of exile, their opportunity for revenge comes when Belle and Beast’s son decides to allow some of the villain children to come to their prep school on the mainland, arguing that their children don’t deserve to be punished. Enter Maleficent’s daughter Mal, the Evil Queen’s daughter Evie, Jafar’s son Jay, and Cruela De Vil’s son Carlos, four friends with a secret plan to steal the Fairy Godmother’s wand to free their parents. But after getting a taste of what it’s like to be good, will they really want to be bad? 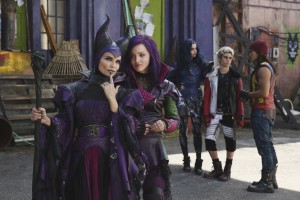 Kenny Ortega, director of some of my favorite movies (Hocus Pocus, Newsies) and DCOMs (High School Musical series), has done a wonderful job with Descendants. The marketing has downplayed the fact that it’s a musical, leading me to burst out within the first minute and exclaim “This is a MUSICAL?!?!?” Yes, it’s a musical, but it has far fewer songs than you would expect and they vary from modern R&B and pop to cabaret-style numbers. Speaking of Hocus Pocus, Kathy Najimy plays the Evil Queen and be sure to look for a few subtle nods to her character Mary, including throwing popcorn at the TV. There is also a moment where Maleficent pets her spell book similar to the way Bette Midler did in the Halloween classic. 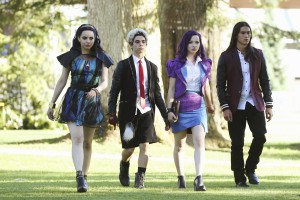 I was ecstatic when I learned that Kristin Chenoweth, the mother of the high-C, was cast as Maleficent. She plays her with a mix of Eleanor Audley’s grace and Chenoweth’s usual campy charm and is absolutely delightful in this film. The main character is her daughter Mal, played by Liv & Maddy‘s Dove Cameron. I have always found her to be very grating in everything else I’ve ever seen her in (including a plane ride I once had the misfortune of sharing with her), but under Ortega’s direction she comes off as not only realistic, but also relatable. This is her best performance to date. However, the actress that stole the spotlight for me was Sofia Carson, who plays Evie. She’s a relative unknown, but has so much charisma while playing a character that should have been annoying that you can’t help but love her. I expect her to be a big deal a year from now when her next DCOM premiers, Further Adventures in Babysitting. 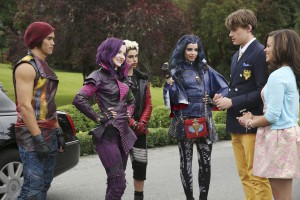 Overall, Descendants is a great film. It does have a few problems, including being a little too modern for a fairy tale world with iPads and smart phones, but these are minor complaints. My only real gripe with the film is the last five seconds, where there is a groan-worthy attempt at setting up a sequel. But I highly recommend this to any Disney fan, if for no other reason than to see what they’ve done with the characters, the Hocus Pocus references, and Kristin Chenoweth’s Maleficent which is closer to the animated character than Angelina Jolie’s portrayal.

I give Descendants 4.5 out of 5 magic wands.