Welcome back to Disney Extinct Attractions. My name is Cole Geryak and I’ll be your host on today’s unofficial look at two nighttime parades, one beloved and one despised. 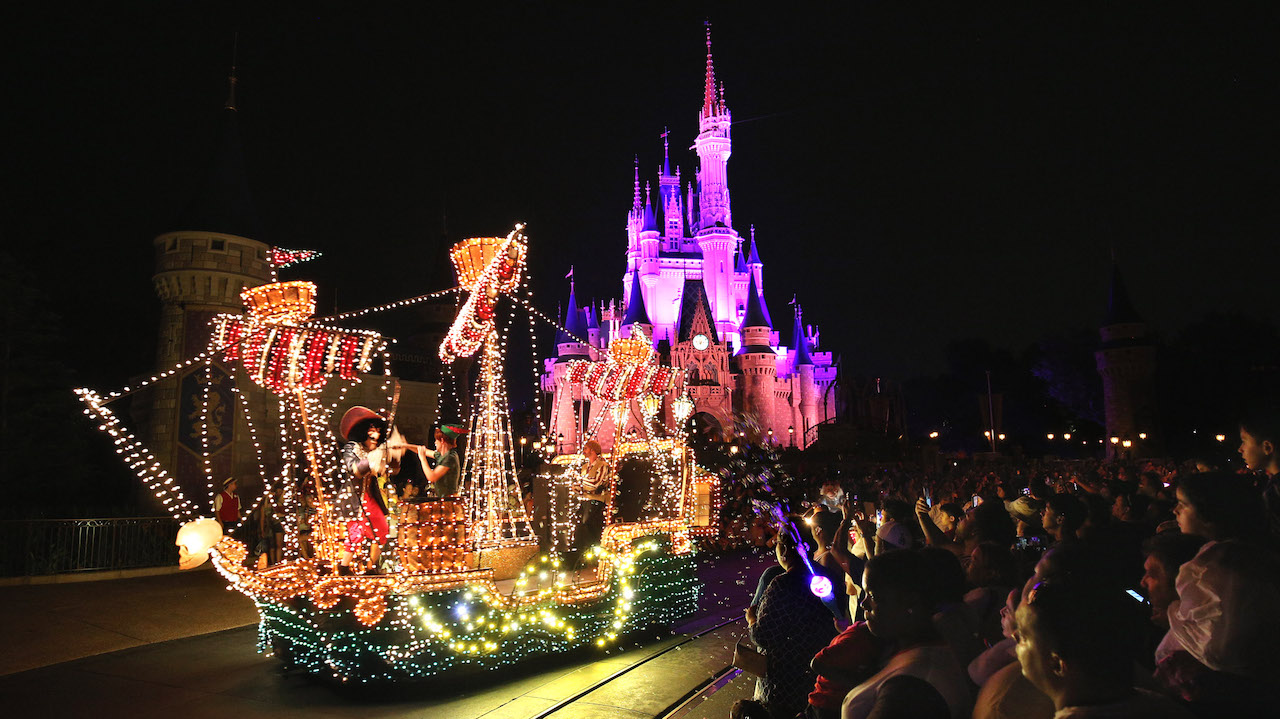 This past week, it was announced that the Main Street Electrical Parade would be returning to Disneyland in early 2017, ending its six-year run at the Magic Kingdom. It was originally reported that the classic parade was only going to be in Walt Disney World for a few months, but those months turned into years and Disneyland faithful never got a chance to say goodbye to the parade they so loved . . . until now!

Personally, I am extremely excited because the Main Street Electrical Parade is my absolute favorite parade of all time. I get to Disneyland much more often, so it will be nice to have it back (though I’m bummed that I’ll be missing its final Florida performance by about five days). It will be nice for the parade to have one final run at Disneyland before riding off into the Disney attractions sunset. However, the nighttime parade has a way of never going away, as it has appeared almost continuously between five different parks since its opening in 1972. 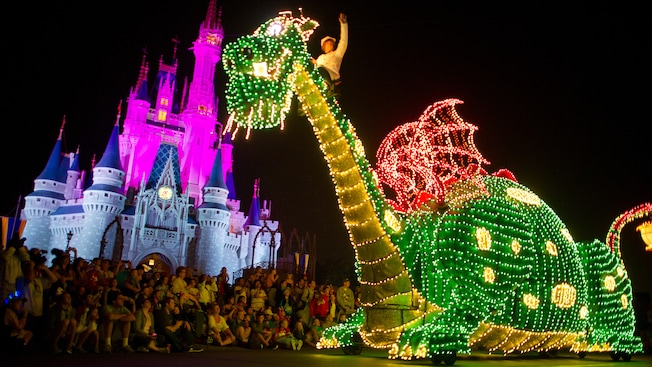 In fact, the parade’s storied history makes it a perfect map for today’s journey through some of the parades that followed in the footsteps of the Main Street Electrical Parade. So to begin our journey, let’s take a leap back to 1991 and visit the Magic Kingdom in time for its 20th anniversary. 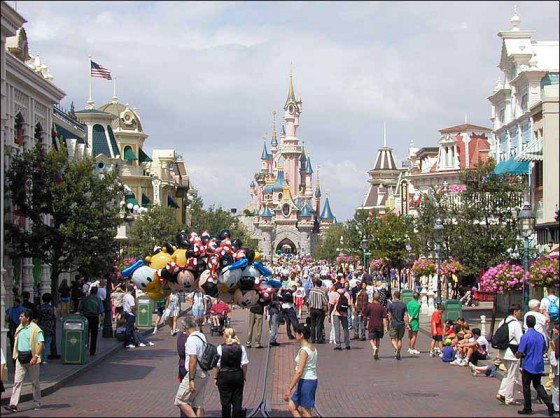 At one point during the late 1980s, there were Main Street Electrical Parades at each of the three Disney resorts at the time (Anaheim, Orlando, and Tokyo). At the same time, construction was gearing up at Disneyland Paris — the first resort built in nine years. The park was going to have a lot of similar experiences to the other resorts, so adding the nighttime parade was a given considering that it could be found at each of the other resorts.

Simultaneously, Walt Disney World was preparing to celebrate its twentieth anniversary, As a part of the celebration, Walt Disney Imagineering decided it was time for the Magic Kingdom to add a new nighttime experience, meaning their version of the Main Street Electrical Parade would become a world traveler, moving over to Paris. In its place, SpectroMagic officially debuted on the 20th anniversary of the Magic Kingdom, October 1, 1991. 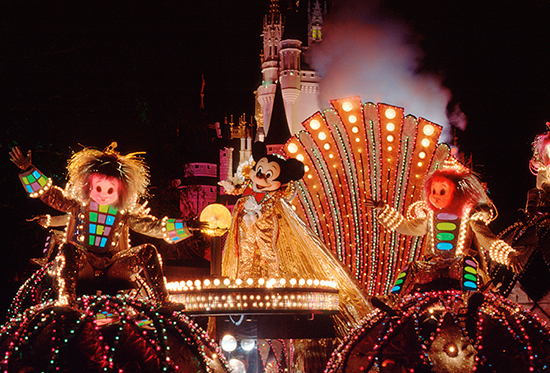 SpectroMagic was one of those rare attractions that was as loved as its predecessor, deemed a worthy successor almost from Day One. What helped was that the floats in this parade were beautiful and just plain awesome looking. Each major float was accompanied by a bunch of smaller floats, each of which perfectly supported the story while maintaining the ornate look of the rest of the parade. 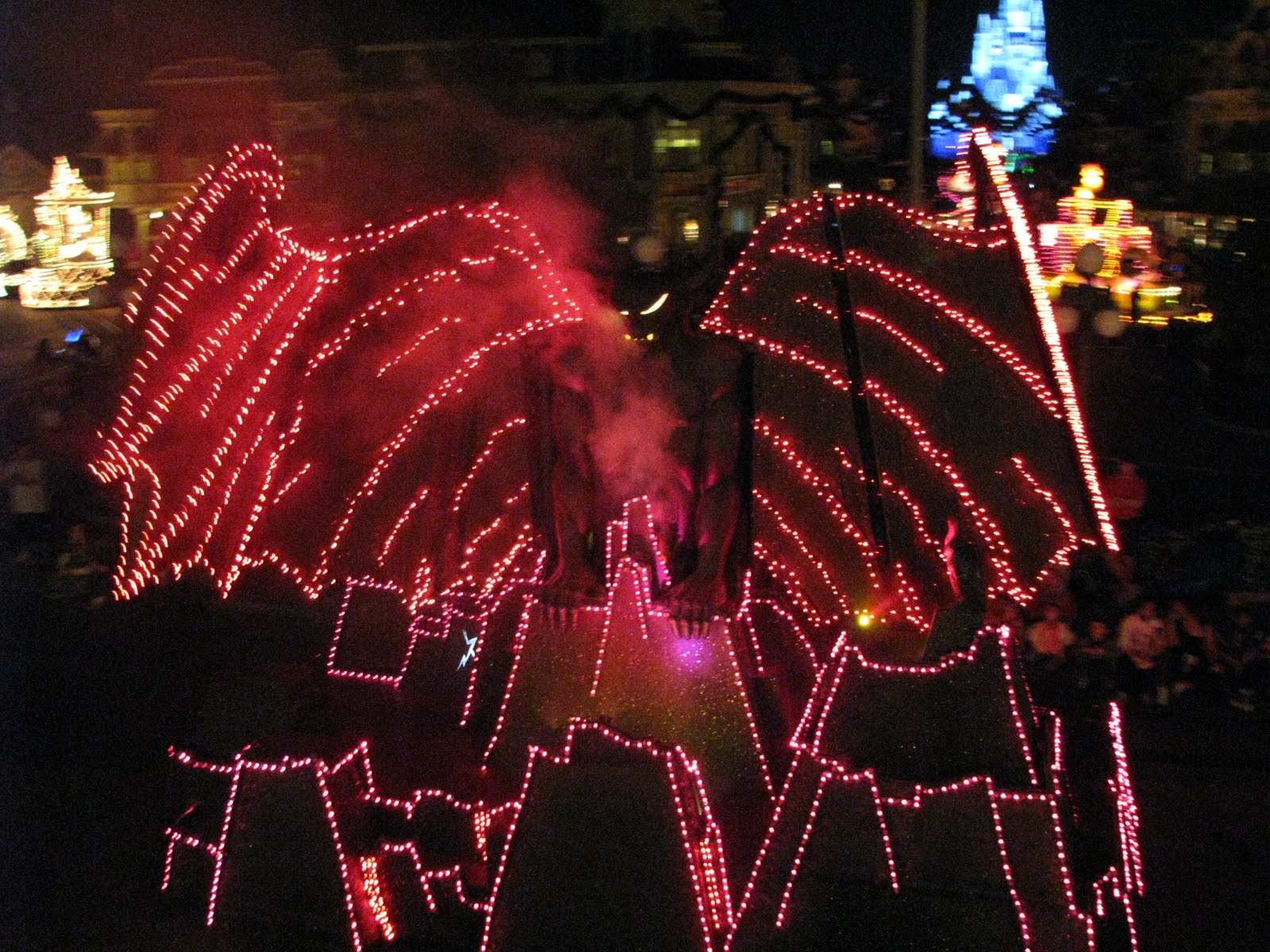 There were five prevalent themes represented in the parade: the Silly Symphonies, Sleeping Beauty, the Little Mermaid, Fantasia, and the World of Dreams. Each of these groups had many of their characters represented, with a couple of highlights being a giant Chernabog that opened and closed, as well as an entire Ursula float (even though Ursula scares me, I respect the float). I really loved the wide breadth of characters involved in this parade because you almost never get a chance to see characters like the Three Little Pigs involved at the Disney Parks. But I would be remiss to discuss SpectroMagic without talking about its score. Many Walt Disney World faithful place this score amongst their favorite pieces of music in the Disney Parks and you can certainly see why. The music immediately transports you into the Disney mindset, truly reminding you of why the parks mean so much to so many people. 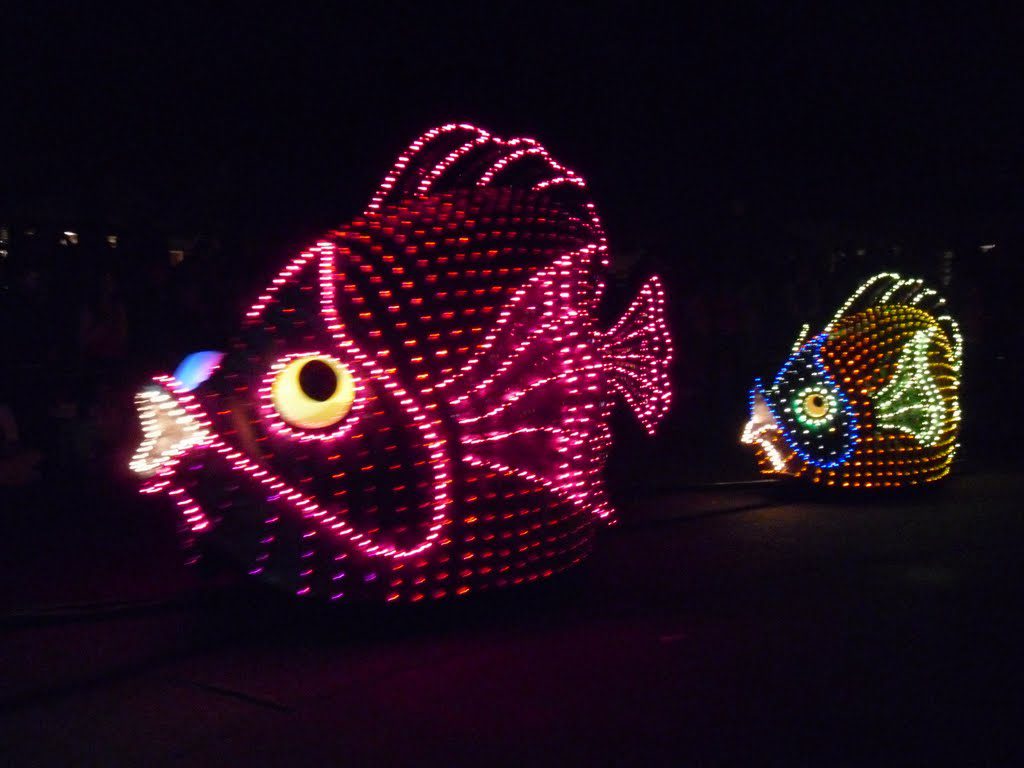 I never got the chance to see this parade in person, but I really wish that I had. Though not quite as fun as the Electrical Parade (in my opinion), I do think that SpectroMagic was a more beautiful parade than its predecessor. With that in mind, below you’ll find a video of SpectroMagic in all of its glory. It’s well worth checking out if you never got the chance to see it or if you want to relive your days watching the parade.

Now before we talk about the end of SpectroMagic, we have to rejoin our guiding light, the Main Street Electrical Parade, as it ended its journey at Disneyland. With the success of SpectroMagic in Florida, Disneyland opted to end its Main Street Electrical Parade’s run in 1997. In its stead, a brand-new nighttime parade known as Light Magic debuted in the Happiest Place on Earth on May 23, 1997.

Unlike SpectroMagic, Light Magic was one of the biggest failures to ever grace the Disney Parks, even garnering the nickname Light Tragic. The problems started when Disney held a paid preview for Annual Passholders a week before the attraction’s opening day and didn’t inform the guests that it was actually a dress rehearsal until they got there. The preview had more problems than solutions, so guests lined up outside of City Hall because of both their disappointment in the parade and the fact that no one had mentioned it was a dress rehearsal.

One of the biggest problems with the attraction was that it wasn’t truly a parade. Similarly to the Block Party Bash, this parade was more of a show. If you weren’t at one of the show stops at Main Street or “it’s a small world”, then you were out of luck because you wouldn’t be able to see almost any of the “streetacular.” Watching the show, you could tell that it really didn’t understand its own identity, switching between a show and parade throughout, but never really catching a footing as either. 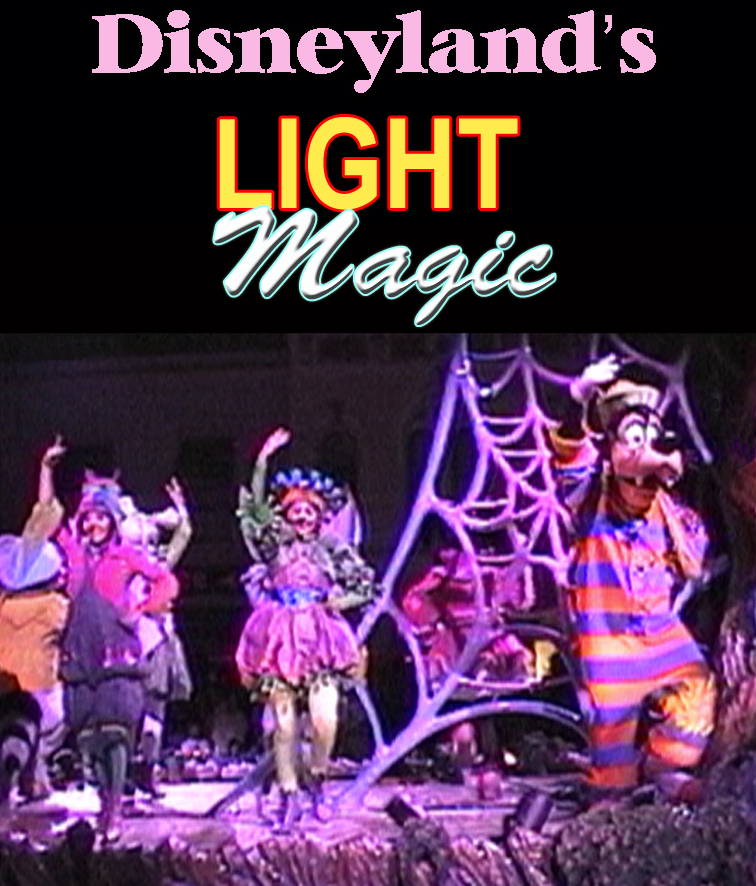 Another aspect that didn’t really work was having so many fairies in the parade. All of the floats were decorated to look like fairy hollows, but this was before Tinker Bell’s fairy friends were even thoughts in the minds of Disney brass. The fairies just didn’t have that Disney feel that you know and love, especially because they looked pretty creepy. What made it even weirder was that classic Disney characters would come out and join them, but it never felt like they fit together.

Having these characters actually led to one of the cooler parts of the attraction because lots of characters that usually aren’t in parades or the parks made an appearance. Some of the coolest ones that I saw were Winnie-the-Pooh and the Three Little Pigs (the 90s were very good to them apparently), so having them involved made the “streetacular” worth a look.

Just as with SpectroMagic, I need to mention the music in Light Magic, although for a much different reason. The music was all Celtic-themed with renditions of Beauty and the Beast and other classic Disney songs changed to have a Scottish beat. Needless to say, it really did not work well, especially since there were almost no lyrics or dialogue throughout the entire show. Almost no Disney shows or parades have that type of wordless nature and this attraction was a prime example of why that is a bad idea. The entertainment in front of you has to justify that technique for it to work and, unfortunately, it simply did not in Light Magic.

But that’s enough of me bagging on the show. Maybe you didn’t think it was as poor as I did or never got the chance to see it, so you couldn’t make an opinion on your own. Now you have your chance because you can find the full parade below, but the quality is not so great because it was filmed almost 20 years ago. Any Light Magic defenders out there, be sure to come to its rescue!

Guests at Disneyland tended to agree with me as Light Tragic faded into oblivion on September 8, 1997, not even four months after its opening. But, sadly, that didn’t mean that the Main Street Electrical Parade would be returning to Disneyland as it had moved to New York City as the Hercules Electrical Parade. After its time there, the original version moved down south for the Walt Disney World Millennium Celebration. While it was there, SpectroMagic briefly closed down from May 21, 1999 until April 2, 2001.

At that point, the Main Street Electrical Parade moved over to Disney’s California Adventure because the park needed a major attendance boost after the opening of the park did not go well. The parade had a fruitful life at the park, surviving there for nine years before leaving to make way for the construction of the park’s major overhaul. With the park too congested, Disney decided to move the parade “temporarily” to the Magic Kingdom as a part of the 2010 Summer Nightastic festivities, replacing SpectroMagic during that time. 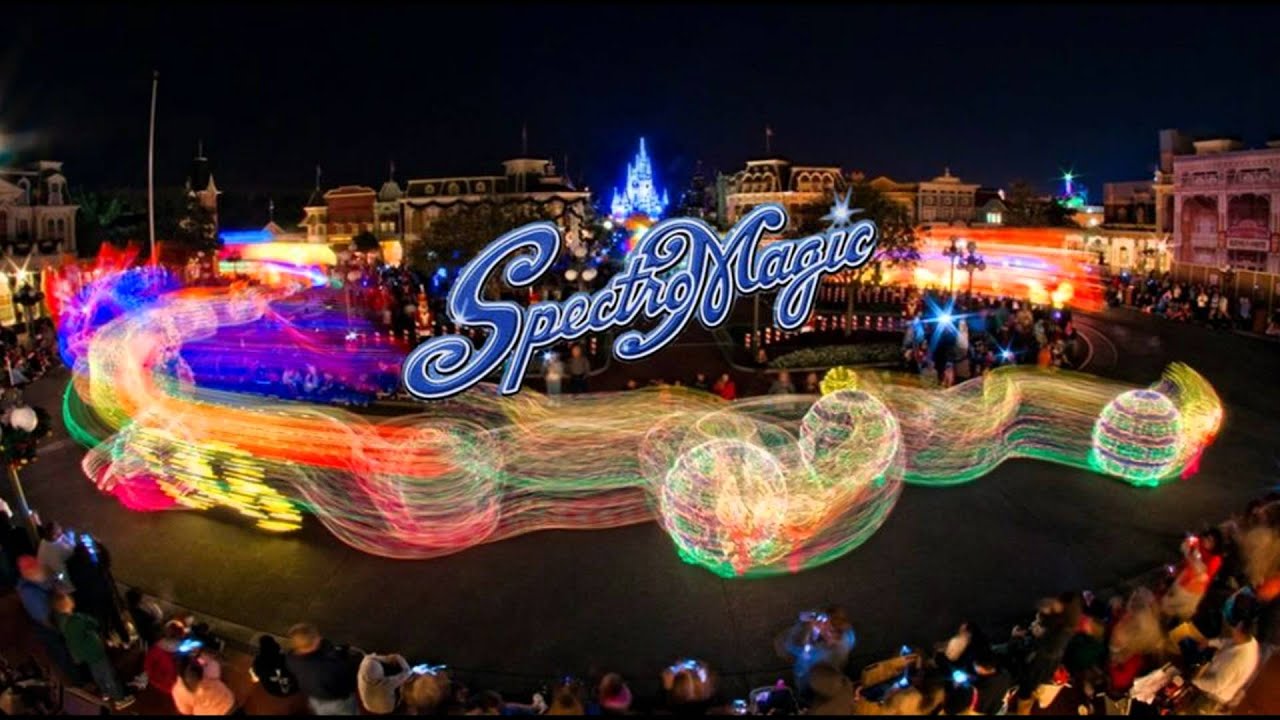 Unfortunately, for fans of SpectroMagic, the Main Street Electrical Parade lasted for six years. Fans were left pondering whether SpectroMagic would ever return to the streets of the Magic Kingdom until 2013, when it was officially announced that the floats from the nighttime parade had been destroyed. It was an unceremonious end to a spectacular parade, one that truly deserved better. But who knows, maybe one day we’ll see a reimagining of the parade just as we saw Paint the Night “upgrade” the Main Street Electrical Parade.

And with that, our story comes full circle as the Main Street Electrical Parade will soon return to its home in Disneyland. So now that this week’s journey has ended, let’s take a sneak peek next week.

1. Only one part of this attraction still exists, making it all but extinct.

2. This attraction could be found in two parks, both with areas based on tomorrow.

3. Both versions of this attraction closed in the last year.

Thanks for reading this post, and I sincerely hope you enjoyed it! As I said last week, if you have any questions about anything extinct Disney, be sure to ask them and I’ll answer them on here at the beginning of the posts. You can find contact information below where you can email, tweet, or Facebook message me with all questions and feedback.

So with that funny meme, thanks again for reading and have a magical day!