Welcome to Disney Extinct Attractions. My name is Cole, and I’ll be your guide on today’s journey through some parades from around the world. This past weekend, Avengers: Infinity War debuted with as much aplomb as most everyone expected, grossing $257.7 million domestically — good for the largest opening weekend of all-time. Now that’s impressive, but what is even more fascinating to me is that now nine of the ten largest opening weekends of all-time belong to the Walt Disney Company. Furthermore, only six movies have ever grossed over $200 million in one weekend, three of which have been Disney films released in the past six months (The Last Jedi, Black Panther, and Infinity War). Disney is simply the box-office king right now, proving that their strategy of tentpole releases is a more than viable one.

This weekend, Infinity War also set the record for the largest global opening of all-time, and it did so without opening in China, the largest market outside of the United States. Lately, China has started to become a mecca for entertainment, seen through both the increase in movie theaters and theme parks. Recently, Shanghai Disneyland opened in the Middle Kingdom, but for today’s article, we are going to jump a little further back to the first Disney park in China, Hong Kong Disneyland.

Hong Kong Disneyland opened on September 12, 2005, and it took a while to really hit its stride. When it first opened, the park was without Disney stalwarts like the Haunted Mansion and it’s a small world, and guests were disappointed to say the least. However, Disney has done a lot since then to “fix” the park and help it feel more like the Disney park that people wanted. But even with those missing attractions, one area that Hong Kong Disneyland did not mess up was having a parade ready for opening day. 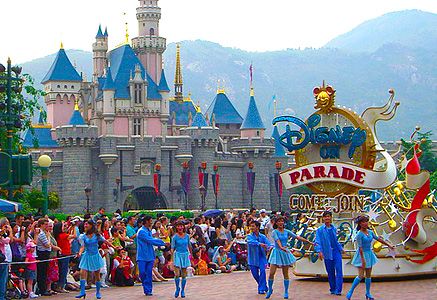 Disney on Parade, not to be confused with the 1970s traveling stage show version, opened with the park, becoming the first ever Disney parade in China. To be fair, the parade wasn’t the most original, actually taking a few of its floats from the 100 Years of Magic Parade at Tokyo Disneyland.

Watching this parade myself, I thought that it was pretty run of the mill, not adding much to the parade genre. However, there were a couple of floats that really stood out.

Via Next Stop Hong Kong

This float, celebrating “Plane Crazy,” was an awesome representation of the early days of Disney history, and for a film nut like me, it is really cool to see them remember that movies actually used film back in the day.

My other favorite float was the Alice in Wonderland float because I have so much love for that film, so to see it given a whole float and backup dancers was awesome. I’ve rarely seen this much love for Alice in a Disney parade, so I was pretty excited when this float rounded the corner.

Disney on Parade actually managed to have a pretty decent life at Hong Kong Disneyland, sticking around until November 1, 2010, when it officially closed to make way for the Flights of Fantasy Parade, which is still in the park today. 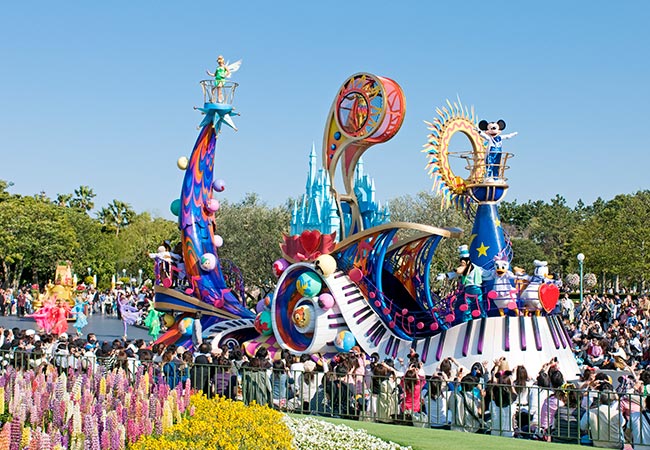 Now, it’s time to take a little skip and a jump over to Tokyo Disneyland where Jubilation! opened on April 15th, 2008 to celebrate the park’s 25th anniversary. This parade had some really interesting floats that did their best to incorporate characters from multiple properties, not something you often see with Disney parades.

The parade even featured characters that don’t normally get their due as seen through an entire Pocahontas float as well as characters from The Jungle Book. 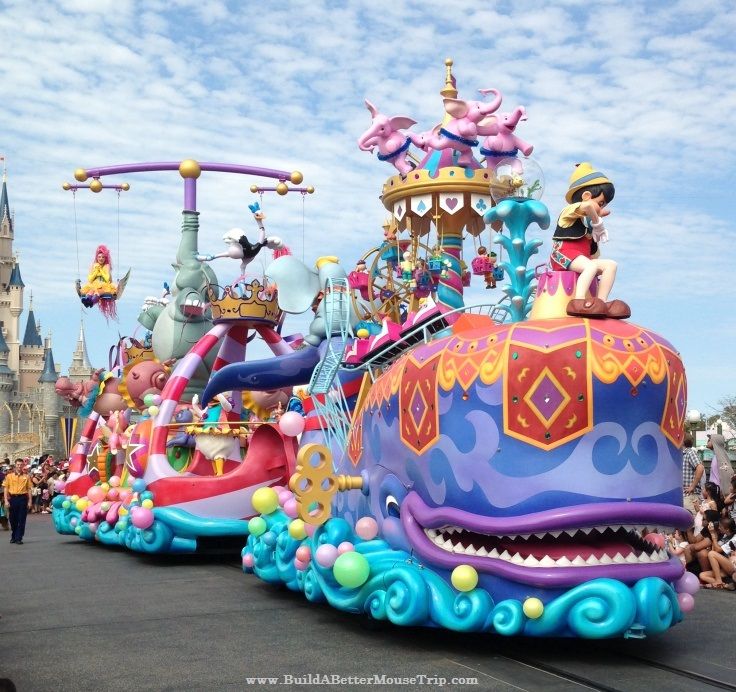 In fact, some of the floats went over so well that they made their way around the world when Jubilation! closed. For example, the above float, which just happens to be one of my favorites, can currently be found in the Festival of Fantasy Parade at the Magic Kingdom. Additionally, a few of the floats were added to Disneyland Paris, as well. 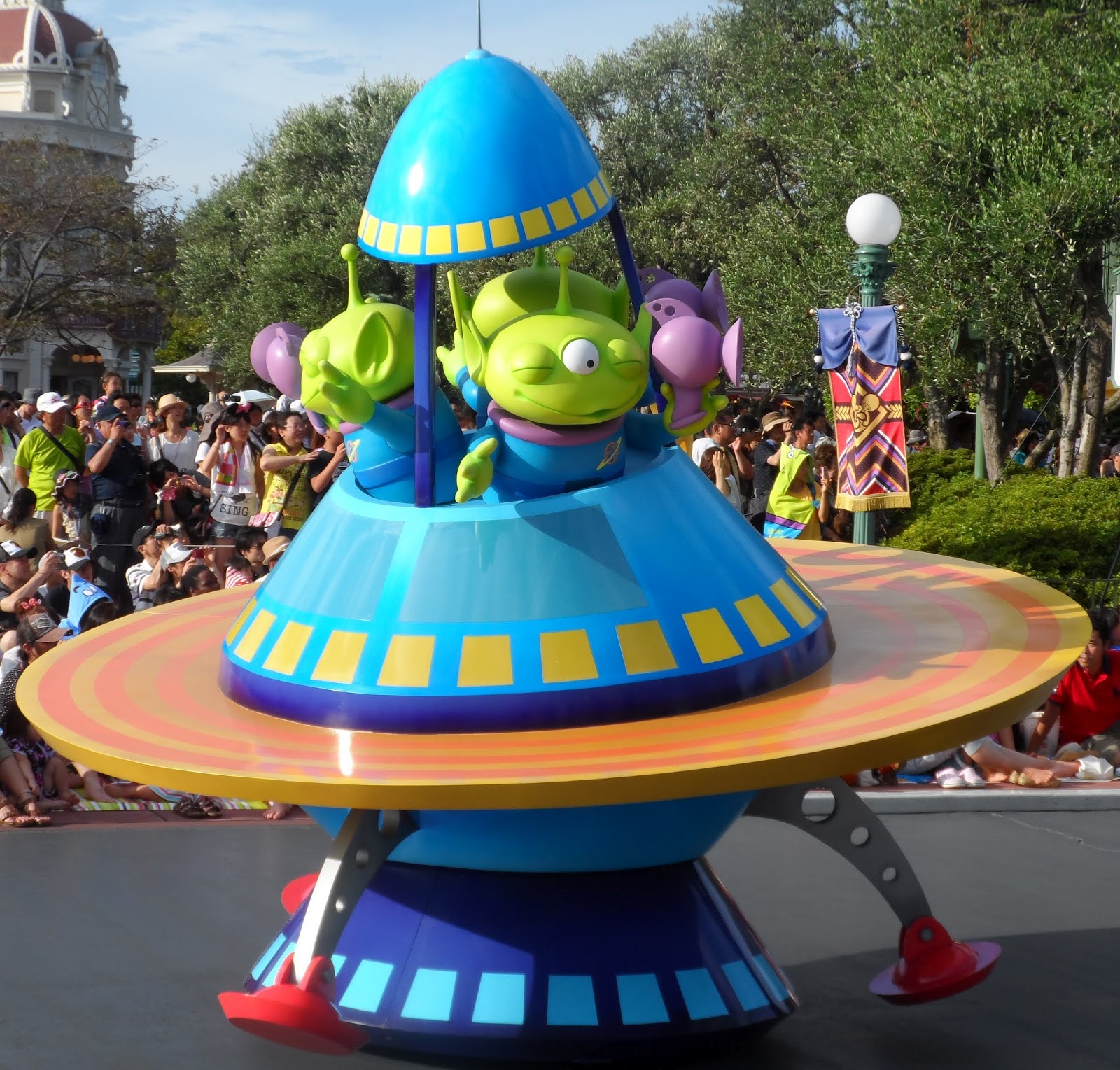 Via Disney ‘Round the World

Now my favorite float transportation was this little float of the Little Green Men. It is so simple, but apparently it was popular enough that it eventually made its way over to Disneyland for Paint the Night. I’ve never before heard of a float going from a daytime parade to a nighttime one, so I think that is a pretty cool distinction to have. 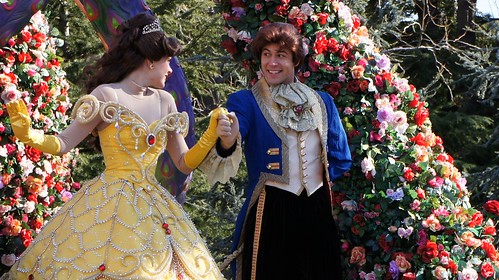 One more thing about the parade that was a bit odd was the choice to use the human version of the Beast. It is pretty rare to see the human version in the parks, so I thought it was a good change of pace to shake things up for this parade.

Overall, I enjoyed Jubilation! a bit more than Disney on Parade. It was more fun and with such awesome floats, it is hard to not enjoy it. However, all good things come to an end with the parade closing on April 5th, 2013 to make way for the Happiness is Here Parade. 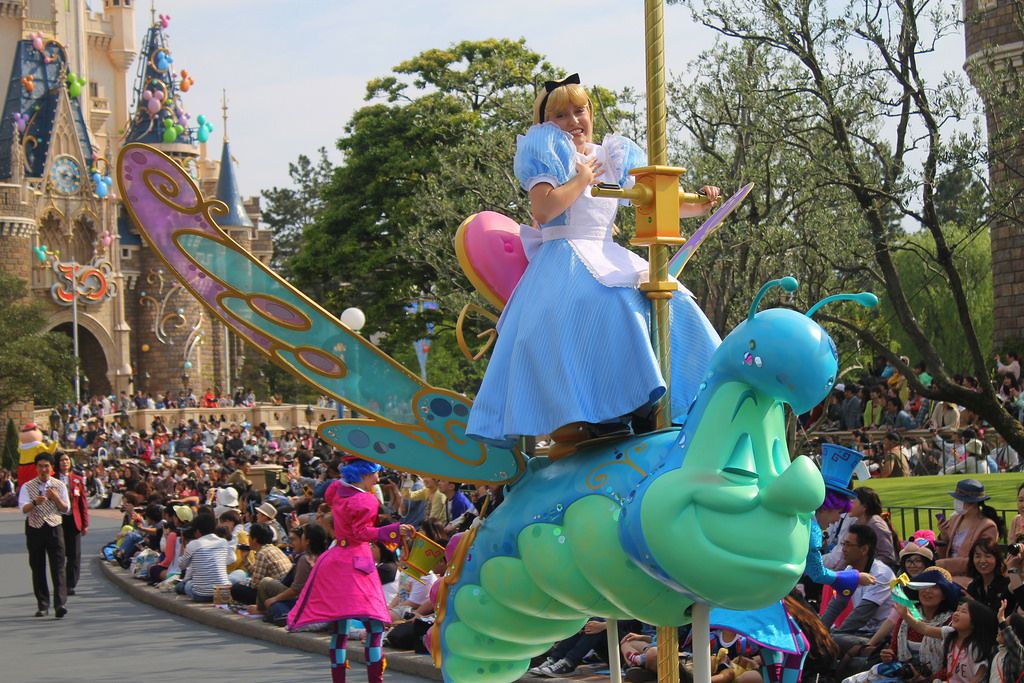 Happiness is Here debuted on April 15th, 2013 to celebrate Tokyo Disneyland’s 30th anniversary. The parade built on the great base that Jubilation! laid with some more fantastic floats.

This parade involved some great characters with Clarabelle Cow even making an appearance. Also, Alice and the Caterpillar got to join in the fun, so that’s bonus points in my book. 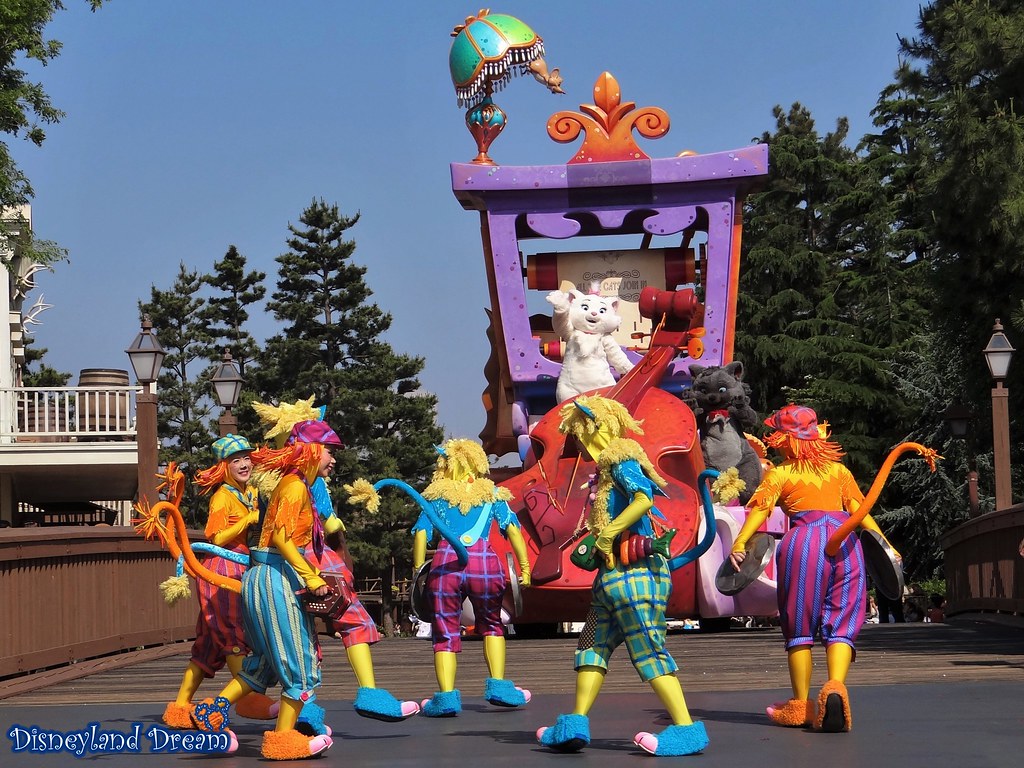 Speaking of great characters, the Aristocats had a float of their own in this parade. The Aristocats get almost no love within the parks, so it was a pleasure to see them appear here. 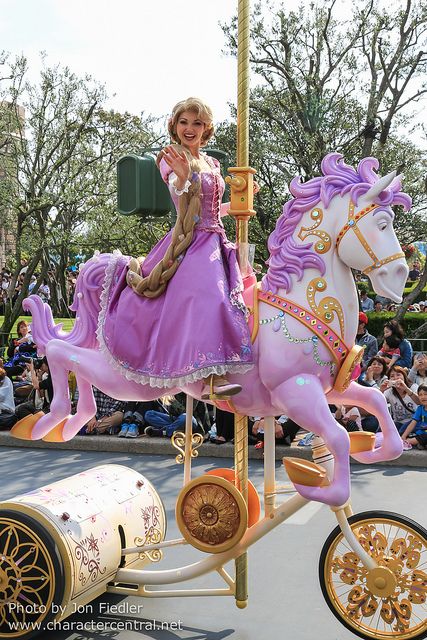 I also really enjoyed the carousel theme featured throughout the parade. About a dozen of the characters rode through the parade on their very own carousel horse. 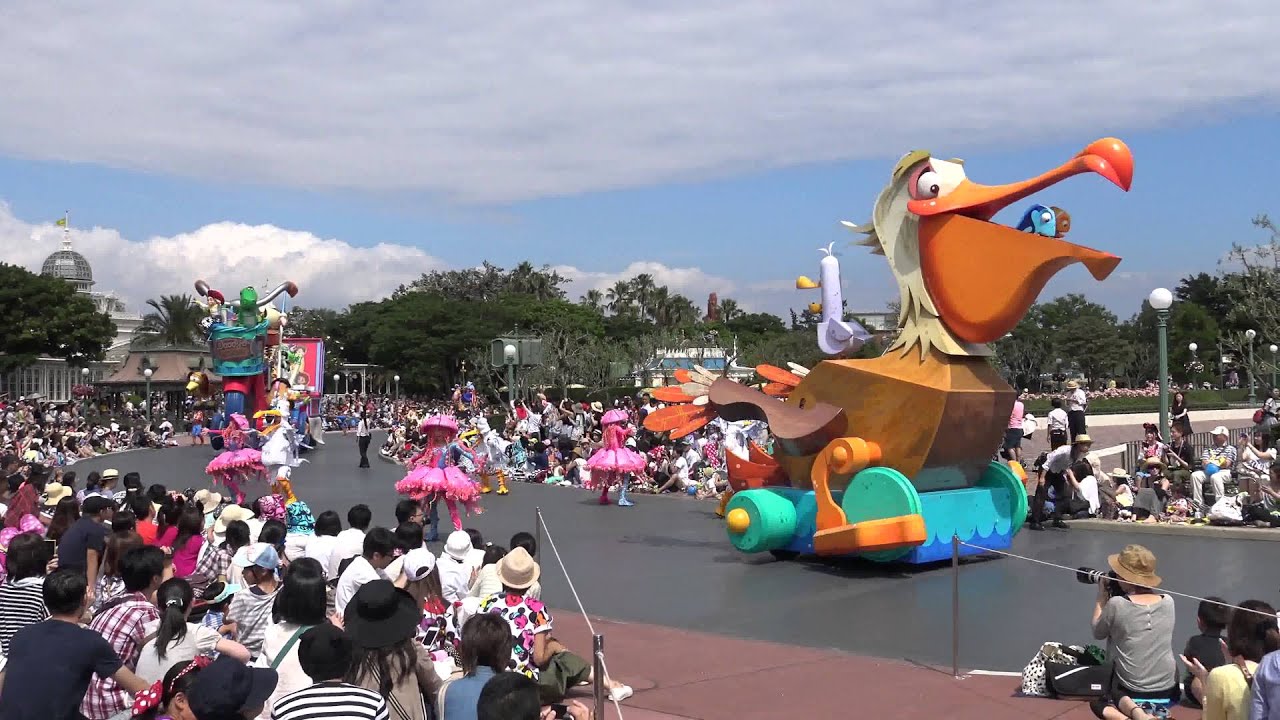 Overall, the parade had a lot of really awesome and unique floats in it. If you couldn’t tell, I’m a sucker for a great float, so Happiness is Here was my favorite parade of the ones that we looked at today, simply because it had so many cool things going on. They incorporated overlooked properties and just made a rollickingly good time out of it.

Happiness is Here closed on April 9, 2018, less than a month ago. Its closure continued the trend of Tokyo Disneyland creating new parades every five years for their anniversary. This time, the parade is called Dreaming Up, and I’m sure it is as great as its predecessors. We’ll have to check back in five years to see if Tokyo continues to keep this trend alive. I sure hope so because it gives guests one guaranteed great thing to look forward to every 5th anniversary.

Speaking of looking forward, here are your clues for next week’s article.