Welcome to Extinct Attractions. My name is Cole, and today I’ll be your composer through a rock opera from Universal Studios.

After a few years of public decline, Spider-Man has made its way back into film vogue with films like 2017’s Spider-Man: Homecoming and this year’s likely Best Animated Film, Spider-Man: Into the Spider-Verse. Sony currently has the film rights to the character, and though they have a deal with Disney to allow Spider-Man into the Marvel Cinematic Universe, it doesn’t seem likely that they’ll be relinquishing those rights any time soon. However, the theme park rights to the character are a far more interesting situation. 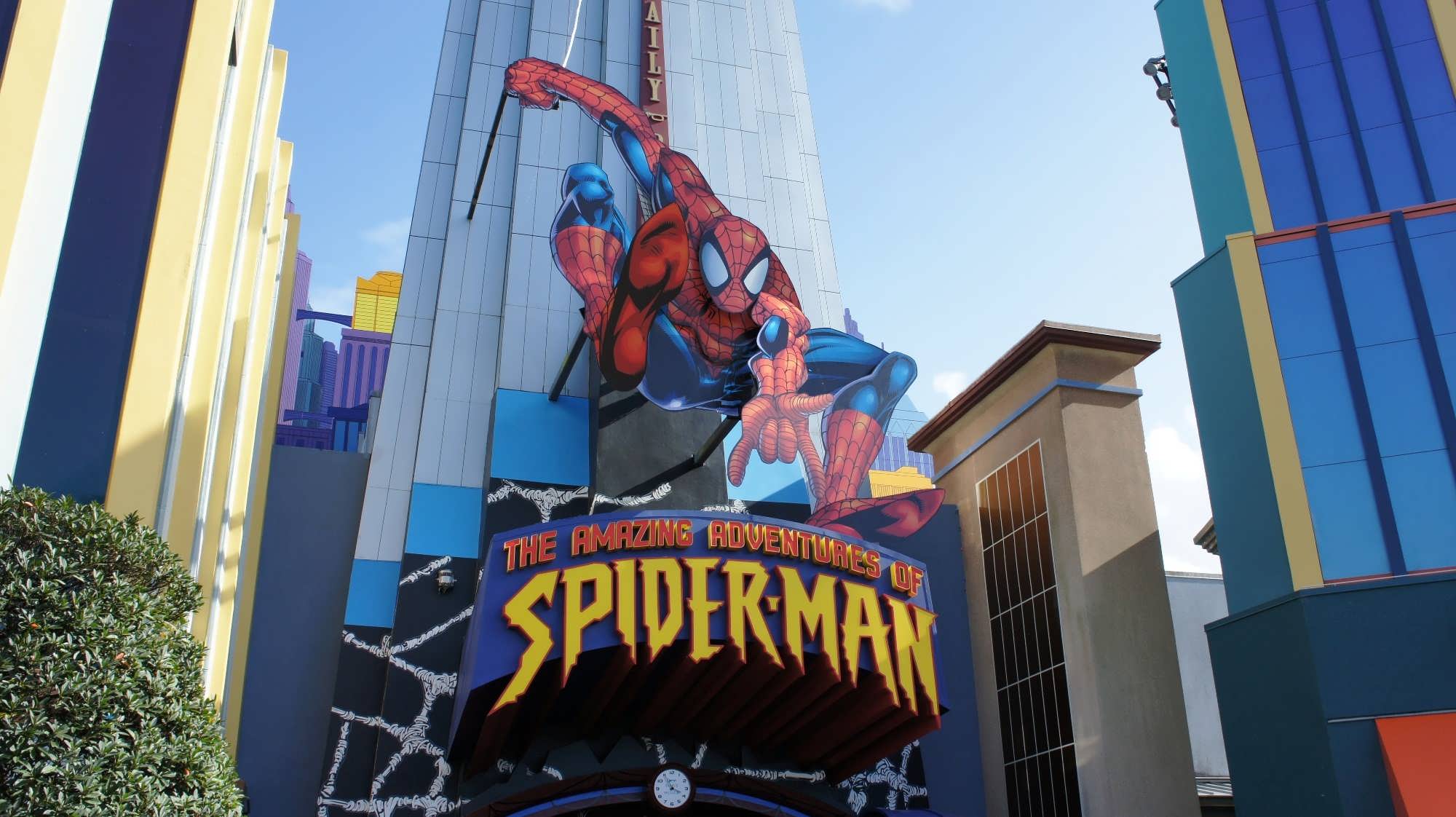 Throughout a lot of Marvel’s history, the company was very cavalier about selling the film and theme park rights to its characters to basically the highest bidder. With this in mind, Universal managed to scoop up the rights to pretty much every Marvel character for use in its theme parks, particularly in Orlando. Universal has made great use of this contract over the years, most notably with The Amazing Adventures of Spider-Man, which opened in 1999. This attraction was an immediate success upon its opening (and remains so today), so after a few years, Universal decided to bring some of the Marvel magic over to their original park, Universal Studios Hollywood. As Universal was making the decision to bring Spider-Man to Hollywood, the film Spider-Man was taking the Hollywood box office by storm. This film helped bring super hero films into the norm, and ended up finishing as the highest-grossing movie of the year. With a popular attraction in Orlando and Spider-Man being such a smash hit (even for another studio), it was truly perfect timing to bring Spidey to Hollywood. 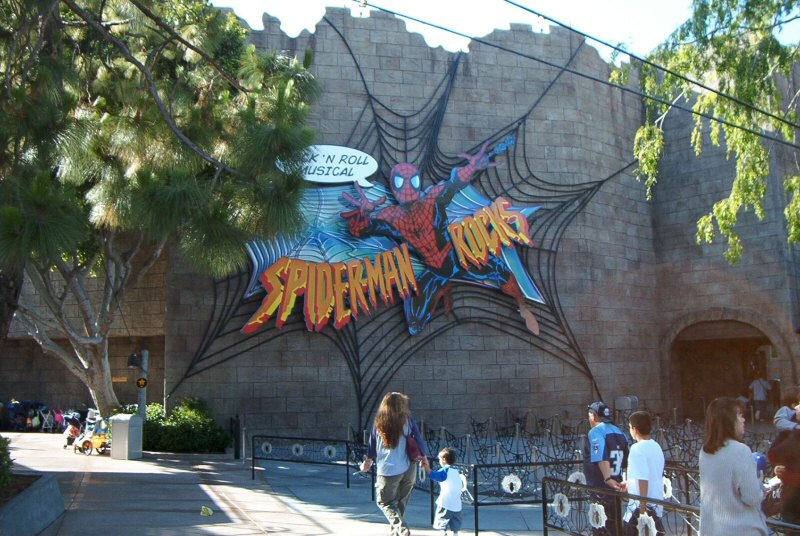 Opening during Memorial Day weekend of 2002, Spider-Man Rocks was Universal Studios Hollywood’s attempt to replicate the success that the films and its sister park were having with the character. I actually remember watching this show when I was a youngster and really enjoying it because I thought Spider-Man was really cool and that the Green Goblin was awesome.

Oh boy, was I wrong.

Who’s idea was this? Because whoever it was should no longer be working at Universal Entertainment. To start off, the show begins with a pickpocket who then is suddenly beating up Peter Parker before boom they are at Oscorp and Peter has been bitten. Then, Peter rips off his shirt and has a six-pack that is showcased as he runs around shirtless for like two minutes while someone stands near the back of the stage and sings “Holding Out for a Hero.” I mean the song makes sense, but also why isn’t Spider-Man singing a song when he just got his powers?

Moving right along, the next song is “She Bangs” by Ricky Martin, which is sung by some muggers as they look at Mary Jane. This show was supposed to be one of the primary things for children at the park, and they are singing that sexual of a song about one of the main characters, whose midriff happens to be exposed the entire show. Something is not adding up here.

Luckily for MJ, Spider-Man comes to the rescue and saves her before running off again to do some Spider-Man stuff. Once he disappears, pretty much the rest of the cast comes on stage and starts singing and dancing for nearly five minutes. Mind you, there are only four people on the stage at this point, so their activity feels pretty lifeless and uninvolved. Plus, where is Spider-Man and why have I only seen him twice so far 15 minutes in? 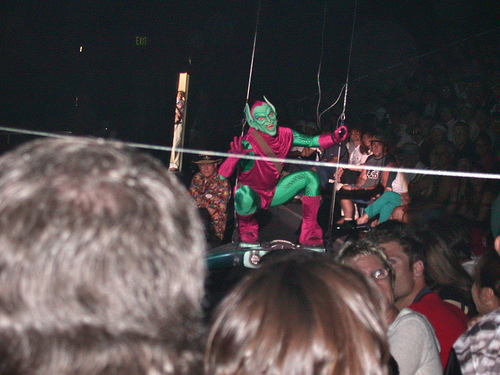 Finally, the show begins to come to a crescendo with the appearance of the Green Goblin on his glider. I really enjoyed this aspect because the Goblin’s glider managed to move all around the entire theater, but then there was almost no midair combat between the Goblin and Spider-Man, which made the entire final fight feel a lot less fun. Instead, the two primarily fought on the ground in hand to hand combat, which is a lot less exciting when you are up close and can tell how fake it is. (Also, the Goblin kept doing this weird laugh that made no sense because he was barely talking.) 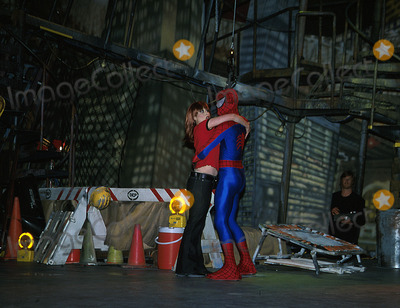 After the fight, the show miraculously came to an end, but not until MJ told Peter that she loved him. They had interacted for about 30 seconds the entire show. And she loves him?! At this point, it was so abundantly clear that they had given up on story that it wasn’t even funny. Most of the show was sung as opposed to spoken word, which normally I’m all for because it’s impressive to do. However, it’s only successful when all of the songs are written specifically for the show as opposed to lumping in rock songs and hoping they fit what you are doing. Compared to the film and attraction, Spider-Man Rocks was such a huge disappointment and it’s amazing that it managed to last until August 2004, when many guests felt similarly to me. 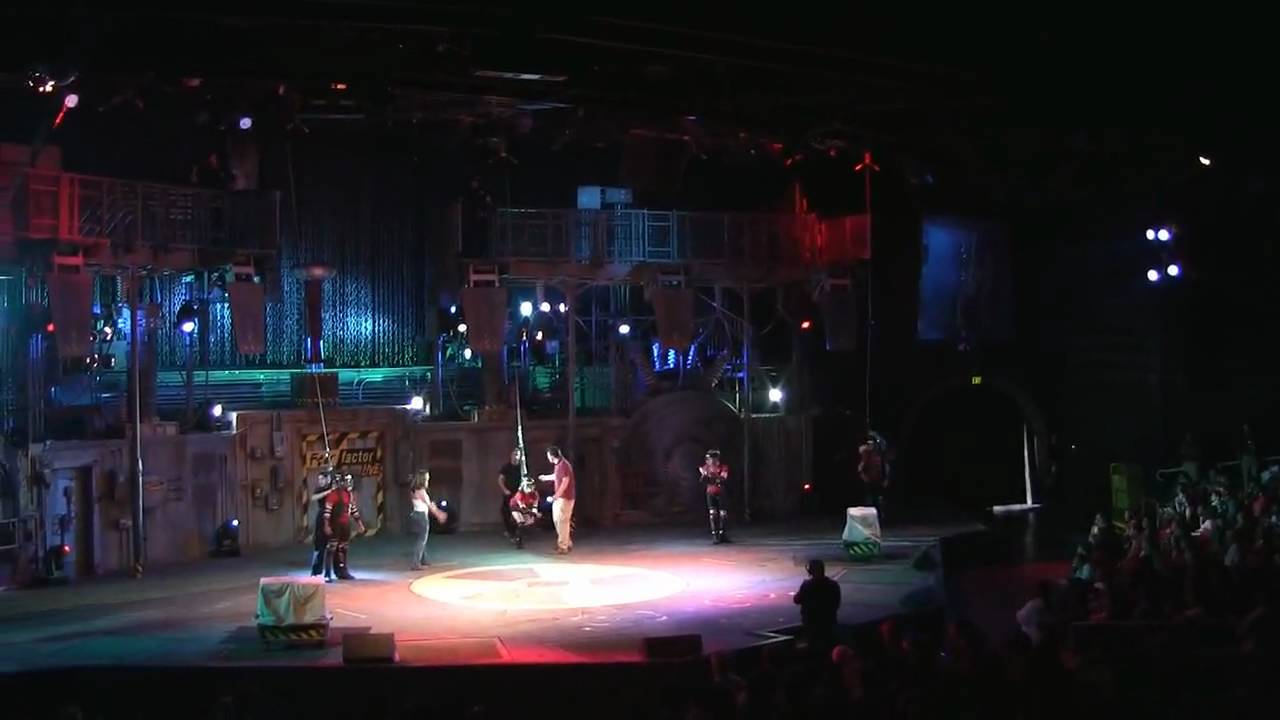 Other than poor attendance, another reason for Spider-Man Rocks’ closure was the merger of NBC and Universal. At the time, one of NBC’s top shows was Fear Factor, so the NBC brass decided to bring the show to life as Fear Factor Live (which is somehow still going strong in Orlando). But a spiritual successor of Spider-Man Rocks did manage to appear at the beginning of this decade.

Spider-Man: Turn off the Dark officially hit Broadway theaters in 2011 after going through the Broadway record for most preview performances ever. A full-scale Broadway musical, the show also was hit by a plethora of poor reviews, though apparently they made changes that really helped it come into its own. But even so, the musical has since gone the way of Spider-Man Rocks and faded off into the distance. We are all better off for it.

Well, that brings our journey today to a close, so here’s your look at what’s coming next week. 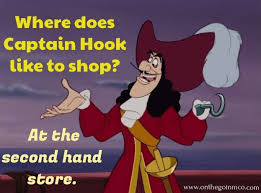