Welcome to Extinct Attractions. My name is Cole, and today we’ll be going on a journey to a theme park within another theme park. 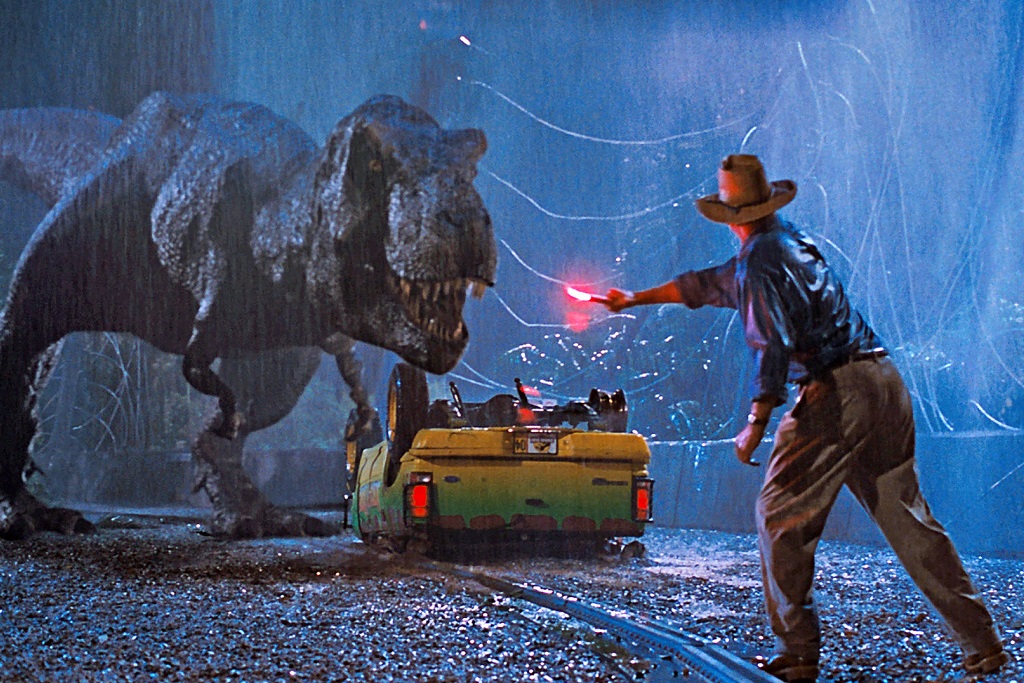 Jurassic Park hit theaters on June 11, 1993. Steven Spielberg had such faith in the idea that he and Universal won a bidding war for the rights to the book before the book had even been released. Meanwhile, Spielberg continued that faith by suggesting to Universal that they make a Jurassic Park ride in 1990, the year the book came out, and three years before the movie, so Universal went to work creating the attraction.

Today, you would never see Universal or Disney greenlighting an attraction 3 years before the movie was released, especially when the movie wasn’t even part of a franchise (well, yet). Sure, Michael Crichton was very successful at the time, but it was still an unprecedented approach to take. Clearly, it worked out pretty well though as Jurassic Park set the record for largest opening weekend of all-time on its way to becoming the highest-grossing film of all-time at the time. 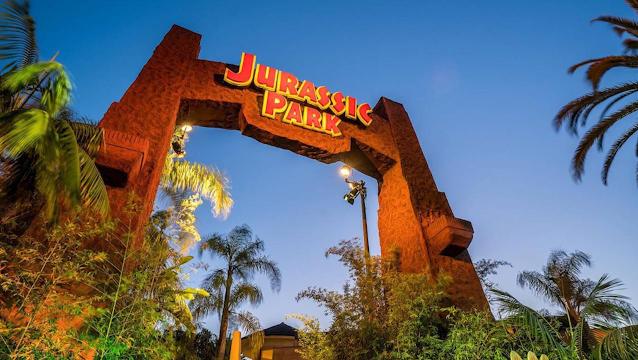 With the gamble having paid off and then some, Universal stayed hard at work on creating an attraction where you could relive some of the fear and fun that you got from the movie. Because of the success, Universal reportedly put over $100 million into the attraction, making it the most expensive attraction ever created at that point, and significantly more expensive than the film itself. But all the effort was worth it when the attraction finally opening on June 21, 1996, three years after the movie.

While the boat sequence from the book never made its way into the movie, that sequence was one of the first things that the designers of the attraction focused in on, so they decided to stick with it and make the attraction a river experience (just the beginning of Universal’s quest to make sure you got wet on every attraction).

Of course, the entire attraction being on water definitely made things a bit more complicated, especially when you are utilizing some of the biggest Audio-Animatronics ever created. I mean, just look at how huge that dinosaur is. It must be over 30 feet tall, and its entire lower half is submerged in water, just where you want to keep your electronics. Some of the dinosaurs were even completed submerged and still work successfully over 20 years later.

The fact that there were a couple dozen full-sized dinosuars throughout the attraction is so incredible. Something on that scale had never been done before, even in the movie, where they could get away with little tricks like only making enough of a dinosaur to be seen in the shot. For the attraction, things were amped up to a whole nother level, and it’s honestly amazing that the technology even existed at the time to put everything together. From what I learned, the tech actually wasn’t there when they first began work on the attraction in 1990, so part of the reason that it took so long is that they were quite literally waiting for technology to catch up to them. 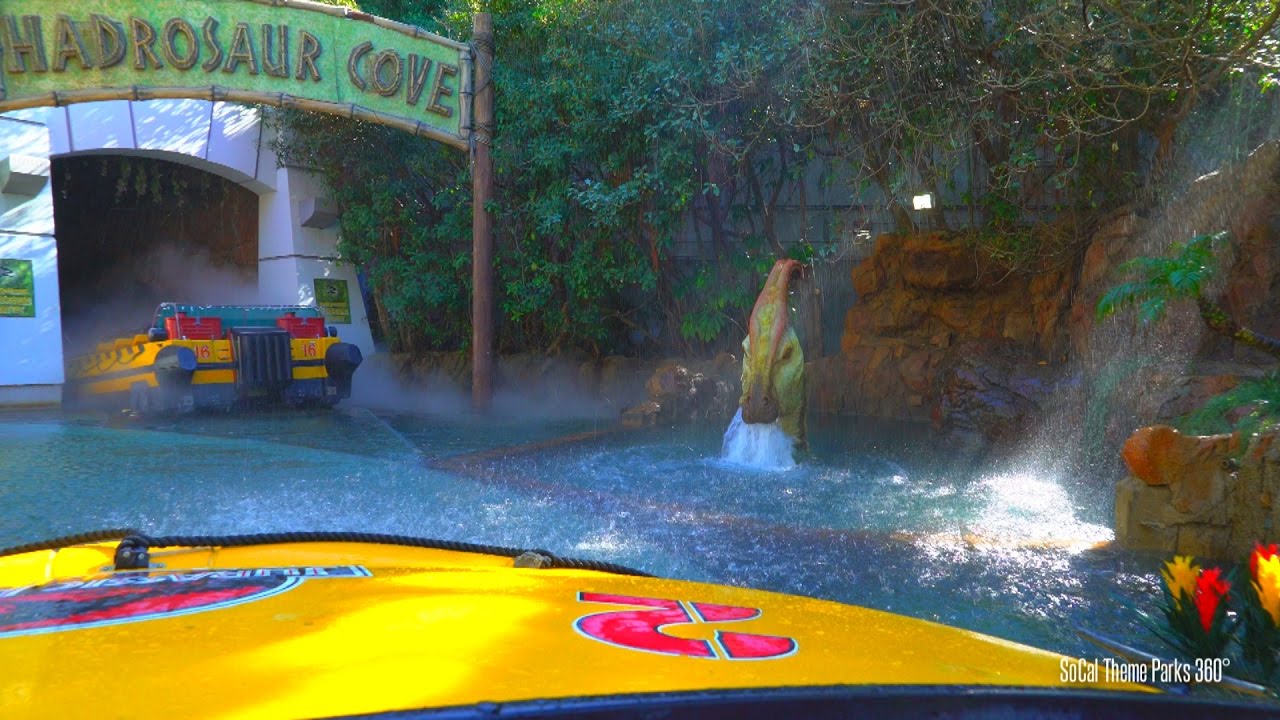 Those dinosaurs are obviously what set the attraction apart to me because Universal has been so focused on using screens recently that having a whole attraction with no screens and the chance to see giant dinosaurs made the attraction a must-do every single time I was there. It had everything that makes older attractions so charming and fun to experience, but also with some fear mixed in, especially at the end. 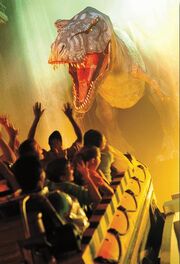 After surviving some harrowing attempts by velociraptors and other carnivores to make you their lunch, you finally got to the top of the building, but then there were sirens blaring because of the T-Rex that had somehow gotten loose and was wreaking havoc. All of it culminated in the T-Rex quite literally swinging out and trying to eat you as you fall down an 85 foot drop to end the attraction. The effect never gets old because of how impressive it is each time. Even though you know the T-Rex won’t touch you, there is that little part of you that says “Oh, no, what if now is the time?”

Now one of my favorite parts of the attraction is that every year for Halloween Horror Nights, they give the attraction a bit of a makeover, adding in some more velociraptors and playing “Welcome to the Jungle” by Guns & Roses once you reached the top. It was pretty simple, but it still added a nice little change of pace that you weren’t expecting, though I wouldn’t go so far as to rename it Jurassic Park in the Dark like they do because the changes didn’t go quite far enough to justify a name change.

Now Jurassic Park in the Dark was fun, but the best Horror Nights experience came in 2008 when the attraction was taken over by Freddy Krueger from A Nightmare on Elm Street. Unfortunately, there isn’t a video of this version of the attraction, which is really too bad because Freddy is my favorite horror movie villain, so I would have loved to have seen him pop up a handful of times throughout the attraction. 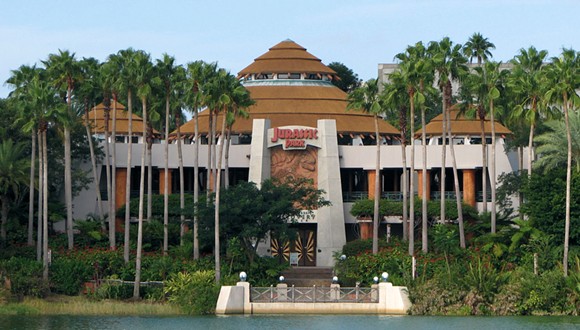 With the ride’s success in Hollywood, both as a ride and a full-fledged franchise, near-duplicates of the attraction made their way to Islands of Adventure in Florida on May 28, 1999 and Universal Studios Japan on March 31, 2001. Both of these attractions opened with the park and remain open nearly unchanged to this day, but we’ll have to see how long that lasts because of the new developments out in California.

On September 3, 2018, Jurassic Park: The Ride closed to transform into Jurassic World: The Ride. I haven’t been able to experience it yet, but from what I’ve heard, the changes are a big success, combining screens and animatronics in a very unique way. With there still being another Jurassic World movie planned for a couple of years from now, it seems like it is just a matter of time until Japan and Florida make the changes to update their own versions. Nothing has been officially announced yet, but Florida is currently in the process of building a new Jurassic World roller coaster, so it seems like an announcement of the update to the new version is just around the corner.

Personally, I’ll be sad to see Jurassic Park: The Ride leave those parks because I will never not be amazed at seeing those giant dinosaurs, but as long as most of them stick around in the new version, I’ll be a happy camper.

Well, that close things out for today, but here’s your peek at next week’s article.