by Jim Hill (archives)
May 10, 2001
Originally published in September 2000, this articles looks at the behind-the-scenes story of how Kingdom of the Sun became the Emperor's New Groove. Part 2 of 2.

LaughingPlace.com continues its publishing of "Jim Hill: From the Archives" with this article, originally published in September 2000.
Click here for Part One of this series. 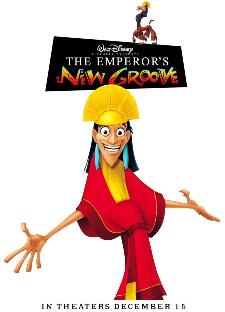 Part Four: Trouble Finding their "Groove"
Animators exit and pop stars get bad news as director Mark Dindal tries to pull a brand new film out of the ashes of Disney's ambitious "Kingdom of the Sun"

OUR STORY SO FAR: Working under an impossibly tight deadline, producer Randy Fullmer and director Mark Dindal actually found a way to turn Rogers Allers' ambitious but ungainly animated epic, "Kingdom of the Sun," into a somewhat easy to produce cartoon. But -- in doing this -- Randy and Mark had to radically reduce the size and scope of the project. What was once supposed to be majestic, grand and glorious, awe - inspiring was now going to be silly, fast moving, cute but -- more importantly -- highly commercial.

Disney CEO Michael Eisner as well as other top executives at Disney Feature Animation were reportedly thrilled with the salvage job that Fullmer and Dindal had done on the troubled production. The animators, musicians and story people who'd already spent three years working on "Kingdom" were -- obviously -- not as enthused.

These folks had labored side by side with the film's original director -- Roger Allers -- and believed strongly in his vision for the project. Understandably, a lot of these people were upset at the idea that the magical motion picture that they had been laboring for months to produce was about to be chopped into a gag fest.

Several of the lead animators on the film -- angered at the thought that years of hard work was about to hit the cutting room floor -- loudly threatened to quit "Kingdom" rather than continue with the project.

Now director Dindal had two huge crisises on his hands. He and Fullmer still had to deliver a finished version of the film in less than two years time *PLUS* Mark had to go around, soothing the egos of all the key talent on the project -- just to make sure that none of them stormed out of the "Kingdom."

(Does this sound like a fun job to you? Kinda makes you wonder why so many people in Hollywood want to direct. Anyway ...)

After Eisner officially greenlighted the revamped version of "Kingdom of the Sun," Dindal and Fullmer hit the ground running. Their first task was to find something to occupy the "Kingdom" production team while they finished overhauling the storyboards for the film.

Mark and Randy were desperate to keep their team intact. That way, once the new "Kingdom" storyboards were completed, they could quickly put the picture back into production. But these guys knew that it was going to take at least six months from them to reboard the film. And Eisner was never going to allow that many animators to just sit around doing nothing while being paid full salary.

Dindal and Fullmer were terrified that some Mouse House accountant might suggest temporarily lay-offing all these idle toon-smiths. If that were to happen, some of the talented team Allers had assembled might wander over to Dreamworks or Warner Feature Animation or -- God Forbid ! -- Fox.

Luckily, Disney master animator Eric Goldberg was right there with a great idea: "Let me borrow your guys for a while."