by Ken Pellman and Bob Barber (archives)
August 1, 1999
Ten years ago Splash Mountain opened at Disneyland. But one month before the official opening five young men bravely went where no non-Cast Members had gone before.
Disney Takes the Plunge

This is a story about David & Jesse Prince, James Uwins, Ken Pellman, Bob Barber, and the opening of Splash Mountain at Disneyland Park ten years ago.

It was a bright Summer day. It was July 17, 1989 - ten years ago, though it doesn't seem that long. Much of Disneyland looked quite different back then. You could park right there in front of the Main Gate and stroll right in through the turnstiles. It was still a lot less than $30 for a single-day passport. Star Tours had been open for just two and a half years. Captain Eo was still cool. The Disneyland executives were people who had been at the park since it opened. Michael Eisner and Frank Wells had been with The Walt Disney Company for less than five years. Fantasmic was still three years away, which meant the west side of the park had nice, quiet evenings, a little too quiet. So, something was being done that day to draw more people to the west side of the park.

This was the day that, after thirty-four years, Disneyland would finally officially open Disney's first log flume, the original Splash Mountain. One of the longest delayed openings for a theme park ride (Universal Florida's Jaws and EPCOT Center's Test Track would later make Splash Mountain's half-year delay seem paltry), Splash Mountain had official groundbreaking ceremonies in April of 1987 with a target opening date of January of 1989. 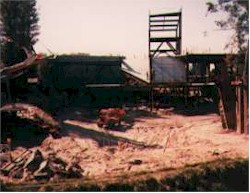 August 1987 photo of the final drop

It was the most impressive log flume attraction built to that date, breaking all sorts of records and featuring characters and music from Song of the South, a controversial Disney film that had been around for over forty years.

The excitement level was at a new high as the public knew that soon, it would be their turn to ride this massive new attraction. This day came with a lot of expectations, as extensive articles in the surrounding print media were commonplace and McDonald's commercials featuring the attraction were blazing over America's televisions a good half-year before this day.

We waited patiently by the Harbor Galley, the eatery constructed at Fowler's Harbor to accommodate the crowds to be drawn because of the new adventure. This was where the front of the line was kept while the Grand Opening festivities took place. A few members of the press took interest in us. Celebrities, Disney officials, and press gathered for the event.

Instead of a red ribbon, a giant "pump" was waiting in front of the mountain for the switch to be thrown and the ride started. A little show featuring Br'er Rabbit and others took place, culminating in Michael Eisner, Ernest (actor James Varney), and others uniting to throw the switch and start the water flowing.

Splash Mountain officially opened at 12:10pm, and we were led in for our rides after the invited celebrities and other VIPs had their rides. 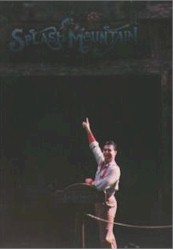 In actuality, previews of the attraction had been taking place since June 29, when the attraction was finally "soft-opened" after days of attempts. Since we'd been on everything else at the park over and over again, we'd get in line, ride, and get right back in line again, even waiting through long breakdowns. By the time July 17 came around, we'd been on the ride dozens and dozens of times, keeping a running count. The highest count for any of us was about 80 rides, and we were infamous to the cast members working the attraction. We started a lot of conversations with guests waiting around us, and even sold a few on annual passes.

However, the first trip we took was the most special one. It didn't take place on June 29, but nearly two weeks earlier.