by Rhett Wickham (archives)
May 7, 2005
Rhett remember legendary animator Joe Grant who passed away on May 6th. 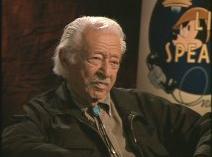 Joe Grant will forever haunt animation, move audiences to tears, and swirl about our hearts like bright autumn leaves, reminding us that those who have come before us are not to be discarded and forgotten, but to be used as a source of courage and inspiration. True inspiration. Never has anyone so unassuming, so gracious and so gentle walked the halls of Disney Animation. Never has any one person - outside of Walt himself - inspired so much creative magic at Disney.

Websters would do well to slip his portrait neatly beside the definition of ‚Äúgentleman.‚Ä? It would have to be a lively caricature that emphasized the snowy wave of hair and apple blush cheeks that framed those jewel-brilliant eyes. Joe Grant‚Äôs face shined with a Father Christmas sort of secret knowledge of exactly what you were wishing in your heart, and for decades he granted those wishes.

Of course, the very same dictionary entry would have to say ‚ÄúSee also terrifying‚Ä?, as Joe Grant‚Äôs carefully imagined stylings for The Queen and her wicked Hag alter ego are at or near the top of almost every film goer‚Äôs list of the most nightmare enducing villains in all of movie history. (A show of hands please by anyone who as a child or an adult has had their sleep disturbed by these characters!) 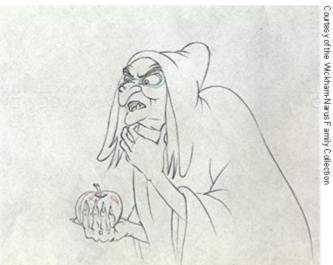 Grant, who passed away on Friday, was plucked by Walt Disney from the offices of the Los Angeles Record, where he was a regularly contributing caricaturist to the newspaper, to make his Disney debut as a character designer for the movie stars who mobbed the mouse in 1933‚Äôs Mickey‚Äôs Gala Premier. Following Snow White, Disney relied on Grant to start a sort of artistic think-tank in an effort to guide the studio‚Äôs next creative steps. Thus was born the Character Model Department, and the list of celebrities who paraded through Grant‚Äôs camp of artistic inspiration was more or less a ‚ÄúWho‚Äôs Who of American Arts and Letters‚Ä?; every one of them stopping to take time and stare in wonder and delight at the plaster maquettes sculpted by Grant (and initially fired in a kiln in his own back yard!) and marvel at the character designs tacked to the walls - all of which soon enough would add up to Fantasia. Grant topped that off when he and his partner-in-crime Dick Huemer took a small book of less than a dozen pages about a lame circus elephant and fashioned it into the most memorable set of big-ears since Clark Gable - Dumbo. The simple truth of a little elephant who flew is as relevant today as it was when he first taught a war-weary America that hope can soar even when you think you‚Äôve ‚Äúdone seen about everything.‚Ä?