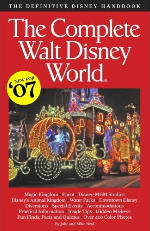 We at LaughingPlace.com are very pleased to welcome Julie and Mike Neal to our list of columnists. Starting in September they will be bringing regular columns on various aspects of visiting Walt Disney World to LaughingPlace.com readers. Below are a few questions we asked the Neals to help introduce them to you. We look forward to bringing you much more from them in the future.

Is this your first book?
No. Our first book was "Sanibel & Captiva: A Guide to the Islands," which we first published in 2002. It's a travel guide to the two side-by-side islands off the coast of Fort Myers, Florida, where we have lived for many years. We'll have the third edition out next spring.

Why did you decide to write The Complete Walt Disney World?
After we published the first edition of our Sanibel & Captiva book, we wanted to tackle something larger for a second book. Mike at first wanted to do a book about Cuba, but Walt Disney World seemed more feasible.

What was your target audience when you began and did that change while writing it?
From the start, our target audience has been people who are already planning to spend at least a few days at Disney and truly want to have a good time while they're here. For example, those who really want to enjoy their experience riding It's A Small World, not just sit there while their kids are having fun.

How long did it take you to write The Complete Walt Disney World?
Five years. We thought it would take one.

What has the response been like so far both in terms of success and feedback?
The feedback we have gotten so far is about what we were expecting, that readers really like all the depth and all the photography. That didn't surprise us. What has been surprising, however, is just how well the book is selling. It's really heartwarming.

What differentiates your books from the myriad of other guide books out there?
Actually, we don't see it as much different than other travel guides in general. For example, it's easy to find a book on Washington D.C. that has hundreds of color photos and a lot of detail on each particular thing you can do there. What's different, I think, is that we are the first publisher to give Walt Disney World that treatment. So, as far as Disney World guides go, it's the only one with hundreds of color photos and it has a lot more depth on the theme parks and the other things to do.