by Ken Pellman (archives)
July 15, 2009
One of the first guests to ride Splash Mountain Ken talks about the attraction as it turns 20 and its great Show Producer, the late Bruce Gordon. 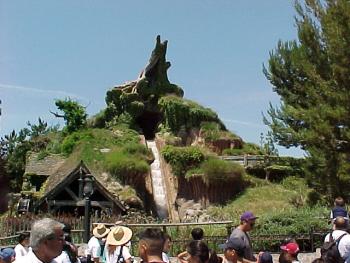 Splash Mountain is twenty years old, and I miss its Show Producer, the late Bruce Gordon. It is impossible for me to think back on Splash Mountain without thinking about Bruce.

It’s quite possible that without Bruce Gordon, Splash Mountain wouldn’t have appeared at Disneyland, and, in turn, wouldn’t have manifested at the Walt Disney World Resort or Tokyo Disney Resort.

The Grand Opening of the original Splash Mountain was celebrated on July 17, 1989, marking the Disneyland 34th anniversary. The attraction had began soft openings at the end of June after general cast member previews started the evening of June 16 - which is when I finally took my first ride after eagerly waiting for two years - a lifetime for a teenager.

Since I first found out about the coming attraction, I had scrounged for every piece of information I could find on Splash Mountain – the facts & figures; the design, construction, installation and testing processes and events; how it would operate; when it was going to open. I tried to piece together in my mind what the experience was going to be like, as well as maintain a history of the project. Information was much harder to come by back then than it is now. LaughingPlace.com was still ten years from becoming a reality. Blogs? Online social networking? Websites? Nobody knew what those things were. Disney News magazine was published quarterly, and their Winter (late) 1988 issue did feature Splash Mountain. That was a help. 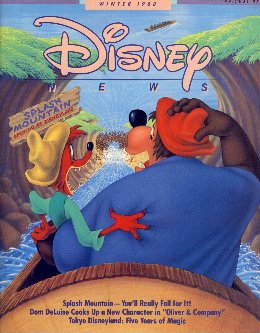 The really hardcore Disney enthusiasts might get their information from fanzines like The “E” Ticket – which covered the past, not the future, or Storyboard - which started publication in late 1987, or a National Fantasy Fan Club or Mouse Club meeting. Storyboard did have a great article on Splash Mountain that boosted our anticipation.

For the technically savvy, there was a dial-up BBS called Mouse Ears. It had one phone line, so only one person could use it at a time. It was all text. According to what is archived at Google, Usenet newsgroup rec.arts.disney didn’t even start until July 1990.

Cast members were sometimes a good source of information, if they really knew their stuff, were in a position to have access to tidbits of info and were willing to share it with a guest.

The Disney Channel might have had something, but my family didn’t have cable. Disneyland Publicity did manage to get some word out to newspapers, and there was a picture and some text in an issue of Los Angeles magazine, and some technical explanations in Hydraulics & Pneumatics Magazine. I wouldn’t be surprised if travel magazines also had articles and blurbs, but would be surprised if they had anything that wasn’t in Disney News. In fact, I do remember that there was something in a scholastic magazine - probably in 1987 – that helped start my interest.

At that time, the Disney Showcase on Main Street was a preview center, and for a while it housed a model of Splash Mountain that was later to be found in The Disney Gallery. I frequently stopped by to study that model. The model is seen in Disneyland: The Inside Story, which was one of the greatest books I’d ever seen in my life.

Yeah, I was obsessed. But most teenagers obsess about something (I mean in addition to crushes and anatomy) – a movie franchise, a band, a game, a sport - something. My obsession was Splash Mountain.

Because my friends and I knew what Imagineers Tony Baxter, Bruce Gordon, and John Stone looked like thanks to the aforementioned media, we recognized Tony and Bruce as they were visiting the attraction late in the testing period, and we struck up conversations with them. Tony and Bruce could have easily dismissed us as silly kids with a strange fixation and avoided us, but they didn’t. Instead, they chatted with us on a few occasions, and as the story goes, when we took that first ride on Splash Mountain, Bruce Gordon was there in the back seat. After all, he had helped to facilitate our early trip. (click here for that LaughingPlace.com story - The Original Splashtranauts)

From then on, Bruce and I would talk on the phone or when we happened bump into each other in person, like when he playfully participated in shooting a television special called “Ernest Goes to Splash Mountain”, playing himself trying to get word in edgewise while a chatty reporter “interviews” him.

Bruce subsequently secured some goodies for us… limited edition bumper stickers that were never sold, a press kit, stuff like that. He did this again in January 1990, when we bumped into him at the news media kickoff event for the Disneyland 35th Anniversary yearlong celebration (the start of the supposed “Disney Decade”. He walked us right in to the media center set up in the Plaza Inn and insisted the publicity staff give us press kits.

Subsequently, I’d look for him at Disneyland special events, and sometimes he’d be there.