Jim Hill: From the Archives
Page 2 of 6

The resulting attraction was a smash hit with Disneyland guests when it opened in June 1963. While the press lavishly praised the life-like appearance of "The Enchanted Tiki Room's" robotic performers, Walt gave the lion share of the credit for the show's success to Boag who not only wrote the script, but did voices for the show as well.

This bit of praise didn't exactly thrill the Imagineers who had labored so long and so hard to create and program all the robotic performers for the "Tiki Room" show. In fact, there were a lot of folks at WED (now known as Walt Disney Imagineering or WDI) as well as the studio who were downright jealous of Wally. They felt that Boag, being Walt's favorite and all, really deserved to be brought down a few pegs.

Disney, on the other hand, was doing everything he could to help Wally's star ascend. Walt even arranged to have the 10,000th performance at Disneyland's Diamond Horseshoe Revue broadcast as a special episode of The Wonderful World of Color. Though that other Horseshoe stalwart Betty Taylor also gets her chance in the spotlight (as does special guest stars Annette Funicello, Ed Wynn and Gene Sheldon), it is Boag, with his traveling salesman and "Pecos Bill" bit, that is obviously the star of the show.

And since Wally had done such wonderful work at Disneyland Walt now wanted Boag to start helping out around the studio. To help further Wally's career as a performer Disney had small roles for Boag written in to The Absent Minded Professor as well as Son of Flubber.

But it was Boag's talents as a writer that Disney really hoped to put to use in Burbank. Walt particularly felt that his animation staff was getting too old and stodgy. He thought that this department could really benefit from a shot of Boag's boundless energy and zany sense of humor.

In fact, it was that aspect of Wally's personality that immediately brought Boag to mind as Walt was sitting in a story meeting for the Winnie the Pooh follow-up. As the animators debated about who should be hired to portray the voice for Tigger, Walt chimed in. "I've got the perfect guy for this: Wally Boag. He'd be great in that part."

With Walt watching out for him like that, Wally could have gone on to do great things for Disney Studios. It's just too bad that Disney died in December 1966. 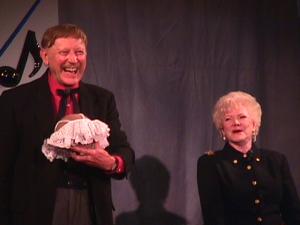 Without his patron to watch out for him and/or find work for him, Boag's opportunities for work outside of Disneyland quickly dried up. All those folks who had been jealous of Wally for all those years finally got their chance for revenge. The attractions Boag proposed at WED never got off the drawing board. The ideas he submitted for TV and movies projects were rejected by studio brass. Except for a small cameo in The Love Bug, Wally never appeared in another Disney film.

Worst of all, the role that Walt thought Boag would have been perfect for - bouncy, trouncy Tigger - was taken away from him. Wally was told that his take on the character was just too zany for a children's film. Disney opted instead to get ventriloquist Paul Winchell to do Tigger's voice instead. (Which, while I will admit that Paul's performance as the striped tiger is great fun, Winchell's voice for Tigger is just a variation of his old Knucklehead Smiff character. Only this time around Knucklehead had a lisp.)

Finally getting the hint, Wally decided to get out of California for a while. When the 1971 opening of Disney's new Florida resort gave Boag the opportunity to take his traveling salesman routine on the road, Boag am-scrayed out of Anaheim. Once in Orlando, he reworked Disneyland's Golden Horseshoe Revue for its new venue: WDW's Diamond Horseshoe Revue. In the process, he created a tighter, faster, funnier version of Disney's saloon show.

When that was done, Boag returned to Disneyland and quietly finished out his career there - week in, week out, entertaining thousands of folks at the Golden Horseshoe. After being honored by the Guinness Book of World records as the performer who played the greatest number of performances in a single show, Wally retired in January 1982.

Ever the professional, Boag, when asked about his days working at Disney, never mentions how shabbily he was treated by folks at the company after Walt's death. Whenever he appears at Disneyana events, Wally stresses the positive side of his time with the company, telling all these wonderful stories about his days with Walt.

Wally's also glad to lend a hand whenever WDI calls. Three years ago, Boag and his old Golden Horseshoe partner Fulton Burley stepped back into a recording studio to help create an all-new "Enchanted Tiki Room" show for WDW's Adventureland. Written by WDI's Kevin Rafferty, the "Under New Management " show is very much in the old Wally Boag spirit: it's fast and very funny with a great new cheap laugh coming along every 10 seconds or so. (Iago's closing for the show, "Well, I'm exhausted. I think I'll go over to the Hall of Presidents and take a nap," may be the meanest but funniest thing I've ever heard said in a Disney theme park show. I'm sure Wally would have approved.) Boag isn't the type of guy to brood over past wrongs, even something as spectacular as losing out on the chance to play Tigger. 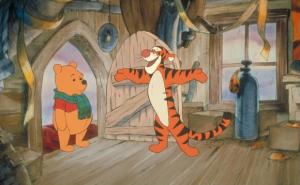 Poor Paul Winchell also got a taste of what it was like to have Disney do him wrong. In late 1998, as Disney was just beginning the recording of the vocals for "The Tigger Movie, Winchell was fired after just one day of working on the film. The reason Paul was let go? The 76 year old performer was told that his voice was just too scratchy now to properly portray bouncy, trouncy Tigger. So Winchell was replaced by Jim Cummings, who supplies the voice for Pooh and Tigger on the Winnie the Pooh animated television series. But there's also a happy ending, of sorts, to this story. When the Imagineers learned about how shabbily Disney's direct-to-video folks had treated Winchell, they insisted on hiring Paul to provide Tigger's voice for their new "Many Adventures of Winnie the Pooh"attraction. So, the voice you hear as you bounce along with Tigger in this WDW attraction is Winchell - not Cummings. And he sounds just fine, thank you.