Jim Hill: From the Archives
Page 6 of 7

Here - possibly - was something Musker and Clements could work with. Hercules was arguably the world's first super hero. Hundreds of tales had been told of his great adventures, where Herc had battled numerous monsters and/or beaten impossible odds.

But what particularly intrigued Ron and John was how - way back then - Herc's heroics had been merchandised. As a tribute to these oft-told tales, Hercules' likeness had been slapped on thousands of dishes and vases in this period. Just as Disney does today while marketing its animated films.

Latching on to this factoid (as well as remembering Katzenberg's insistence that their next film be extremely commercial), Ron and John came up with a subversive subtext for their next project: Why not use the legend of Hercules as the basis for a free-wheeling satire on modern American society?

Musker and Clements were almost gleeful from this premise's comic possibility. They could rearrange Hercules' exploits so that they pointedly commented on our nation's obsession with sports heroes and celebrities. They could also take a few well aimed pokes at a certain Mouse-based company for being so obsessed with moving merchandise. The potential for satire seemed endless.

So that's how Ron and John decided that Hercules would be their next animated project for Disney Studios. Katzenberg was thrilled when he heard their choice. He thought that - since so many people worldwide already knew Hercules' name - this would make this Disney animated feature that much easier to promote. Jeffrey felt that the film was a hit even before its first scene was animated.

But right from the start Hercules proved to be a tough project for the Mouse. Disney had never done a feature length satirical cartoon before, particularly one that had to appeal to children as well as grown-ups. So, for every racy in-joke they aimed at adults, Ron & John made sure that there were an equal number of kid-friendly gags to be found in the film. It took months to get the story's balance just right.

Then there was the casting of the film. Since Musker and Clements wanted their Hercules to satirize celebrity, it was crucial that as many of the film's characters as possible be voiced by big name entertainers. Disney's casting office really out-did themselves on this project; snagging Charlton Heston, Danny DeVito, Rip Torn, Bobcat Goldthwait, Matt Frewer, Paul Shaffer, to name just a few. 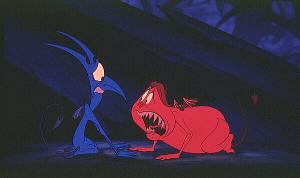 But one role eluded them: Hades, Lord of the Underworld.

Who would be cool enough, funny enough, but menacing enough to deliver the goods on this character?

There was really only one obvious choice. But he was so out of Disney's league, so beyond doing something as piddley-squat as a cartoon, that no one on the Hercules production team even dared to mention his name.

It was only after Danny DeVito was on board the project that his name finally came up. One day, Danny asked who Ron and John had in mind to play Hades. Musker and Clements mumbled under their breath a bit, saying they hadn't yet come up with the right performer for the job.

DeVito just blurted it out. "Why don't you ask Jack?"

Wouldn't Nicholson have made the perfect Hades? The folks at Disney sure thought so. They even had a concept painting put together of Jack playing the role. If you have a copy of Stephen Rebello and Jane Healey's wonderful making-of book for this film (The Art of Hercules: The Chaos of Creation. 1997. Hyperion Press), you can actually see that very same painting on Page 98. That's Nicholson - wearing his ever-present sunglasses - as Hades, seated on his throne in Hell.

But the folks at the Mouse were so in awe of Nicholson's reputation that they hadn't even dared to approach him about the Hercules project. It was actually DeVito (who had directed as well as co-starred with Jack in 20th Century Fox's 1992 release, Hoffa) who made the call to Nicholson, asking if he'd be interested in doing a voice for an animated film for Disney.

Would he be? Sure!

The very next week, Nicholson drove up to the Burbank lot. He brought along his daughter, Lorraine, who came dressed as Snow White. (When folks at the Mouse saw how Jack's little girl was dressed, they took it as a very good sign.) Musker and Clements. along with several other top end Disney executives. gave Jack and his daughter a full tour of the lot. They then took the two of them to lunch at the executive dining room in the Team Disney Building.

After lunch, everyone wandered over to Feature Animation where Ron and John made their pitch. They told Nicholson and his daughter the story of Disney's Hercules, emphasizing Hades' central role in the proceedings. Jack was charmed by what he saw and seemed genuinely enthusiastic about taking part in the project.

There was just one slight minor snag.

Putting it simply, Nicholson wanted an obscene amount of money to play Hades. Disney was hoping to sign him for the part for $500,000, maybe as much as $1 million. Nicholson wanted something more along the lines of $10 - $15 million, plus a 50% cut of all the proceeds from Hades merchandise.

This may seem like an outrageous amount to ask for. But - to Jack's way of thinking - it wasn't unprecedented. He had asked for - and received - a similar deal from Warner Brothers way back in 1986, when he played the Joker in Tim Burton's Batman. Since that film had grossed over $400 million, Warners had more than gotten its investment back in Jack. Plus Nicholson had made an absolute fortune off his share of the Joker merchandise. Some estimate that Jack's cut of the Batman merchandising bonanza eventually came to $50 million.

Nicholson knew that his star power would add considerably to Hercules box office potential. All that Jack asked was that he adequately compensated for his efforts.

It was a heart-breaking moment for Musker and Clements. They knew that Nicholson really wanted to be in Hercules. They also knew that having Jack as the voice of Hades would do for this film what landing Robin Williams to play the Genie did for Aladdin. That 1992 Disney film went on to gross $217 million domestically - most of that just because people came out to see Williams in cartoon form. Audiences were sure to do the same for Jack which meant that Hercules' domestic box office potential was almost unimaginable.

But Ron and John also knew that there was no way that Michael Eisner would ever okay giving Nicholson everything he had asked for. Eisner might see his way clear to giving Jack $5 million or so to play Hades. But there was no way the Mouse would share 50% of the profits from the Hades merchandise with Nicholson. That condition was the deal-breaker.

After Disney came back with a counter offer that was significantly less than what he had asked for, Nicholson passed on the project. It was hard to tell who was more disappointed: Musker and Clements, or Jack's daughter, Lorraine.