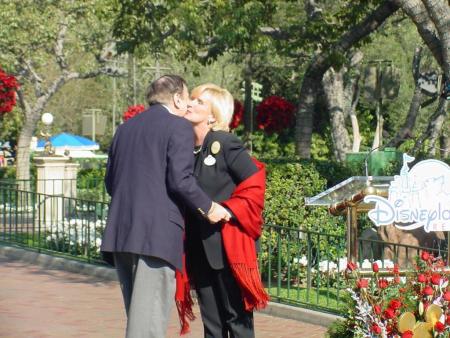 Cynthia Harriss and Richard Sherman hug before he heads over to the piano.
Click here for a much larger version of this picture
(1024 X 768, 151,233 bytes)

Richard Sherman
Thank you, thank you Cynthia. That was a such a lovely thing for you to say. I deeply appreciate it. I am so honored. You cannot, you have no idea what a feeling it is for me to be here today on Walt’s 100th birthday to wish him a Happy Birthday. I know that you all love and enjoy and feel these wonderful experiences when you come to Disney and you see his films and everything, but to have been part of the team to have been part of the gang that put together some of these enchanting experiences that was, there’s no words to describe it. I think at one point in writing Mary Poppins, my brother Bob and I were talking about what it felt like to be working with well, Walt, of course, and Bill Walsh and Don DeGrady, and Peter Ellenshaw, these are all incredible geniuses in their own realm and it inspired us when we were thinking about Mr. Banks at the bank when he loses his job and he’s feeling sorry for himself and he says these words, he said: “A man has dreams of walking with giants, to carve his niche in the edifice of time” well, we felt that way. We were walking with giants, and the greatest giant of all was Walt Disney. He was, the greatest one. 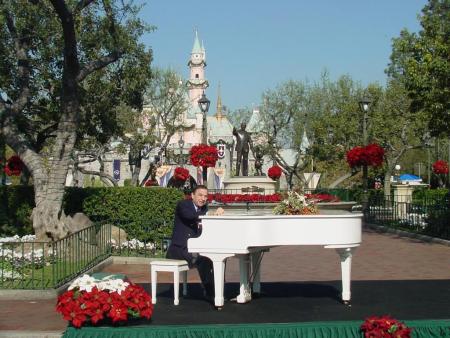 An example of how Walt would inspire you. I’ll talk about Mary Poppins because that was a very special, special film for all of us. We were playing a song for Walt one day, it was a song we had just finished called Jolly Holiday. And as we were singing it we had a sequence where the four waiters would come out and sing these lines. They'd sing, Mary Poppins would say, “Now then what would be nice? We’ll start with raspberry ice and then some cakes and tea.” And then the waiters would come in: “Order what you will there’ll be no bill it’s complimentary.” Now Walt said, Stop, stop,” right in the middle. And I said, “Is something wrong Walt?” Well, no, no, no. I don’t think we want waiters. I think we’ll have penguins be the waiters.” And everybody had this startled look on their faces and I said, “Walt, how do you teach a penguin to sing?” And he said, “Oh no, no we’ll animate the penguins. We’ll animate the whole sequence except for the prime characters, the principal characters, they’ll be live action and everything, everybody else will be animated.” That’s the genius. That spontaneous moment when he said that’s it. That’s the way we’ll do it. And of course that unforgettable Jolly Holiday sequence in Mary Poppins was actually the inspiration of Walt Disney. Because it could’ve been kind of ordinary but it was extraordinary because of Walt. He made everything extraordinary. He made the people that worked for him do things they never dreamed they could because they wanted to please him. And of course the greatest thing in the world was when, if you did please him, he would never say oh wonderful, marvelous, special. He would just say “that’ll work.”

You know Cynthia said Walt was a great believer and he had optimism. He believed in the future. And we wrote one song for the Carousel of Progress which every time I play I kind of think of Walt and I think you might know what I’m talking about when I say, and he sings, "There’s A Great Big Beautiful Tomorrow."

That’s why magical places like this magical kingdom constantly develop and move because tomorrow there’s even going to be another wonderful thing. And that was his dream to keep it moving, keep it bright, never let it stagnate.