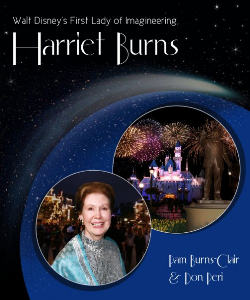 If you’re looking for a dry, dusty straightforward biography about one of the pioneering Imagineers, this book isn’t it.

Rather, this book is like sitting in a room full of Burns’ family, friends, and coworkers as they swap tales about this accomplished Disney Legend. It is a collection of tributes to, and recollections of an extraordinary woman.

As the title implies, Harriet Burns was the first woman to work at WED Enterprises (now Walt Disney Imagineering) in a non-clerical role. Today’s youth takes gender-mixed workplaces for granted, and are usually quite aware of diversity outreaches, sexual harassment prevention training, and government agencies that crack down on gender discrimination in the workplace.

But there was a time when so many professions and workplaces were “boys clubs” – a woman didn’t stand a chance of breaking in unless her talent surpassed resistance. Enter Burns. A woman breaking into the boys clubs in those days, in addition to being extremely talented, also had to either blend in like “one of the boys” or use her feminine wiles, thick skin, and quick wit to deflect hostility and win the guys over. From what I’ve read in this book, Burns definitely did the latter, using grace, charm, and a good laugh to endear others to her.

Burns was known for being impeccably presentable in a feminine way and always wearing dresses or skirts, using pants only when certain work tasks required them for modesty purposes. But she also was quick with off-color jokes and kidding.

Being easy on the eyes made her appearances on Walt Disney’s Wonderful World of Color even more memorable, though her models and other creations were more than enough. Her work spoke for itself, but it sure didn’t hurt that she was a good spokesperson for it. Her appearances on the show inspired new generations of designers, male and female. You can read more about that in the book.

Imagineering’s famous Model Shop (“Dimensional Design” now in corporatespeak) started with Burns, Fred Joerger and Wathel Rogers. Burns had come to Walt Disney Productions to work on sets for the original Mickey Mouse Club television show before being transferred to WED so that Walt Disney could have reliable models to create and grow Disneyland.

Burns retired in 1986. Not content to have a sedentary retirement, she stayed active and connected to Disney circles, including making appearances at enthusiast events and offering her insights to media analysis of her work. She slipped away from us in 2008 due to complications from heart surgery, having been active until then.

I’m thankful for this book because I didn’t know Burns, and now I have a better idea of the person behind such fantastic creations, and more of an understanding of that early WED culture.

Here are just some of the contributors to this book whose names you may recognize:

This book is a must-have for theme park and Imagineering enthusiasts, archivists, and historians, and is highly recommended for anyone who wants to examine how women first established themselves in modern entertainment design.

Ken Pellman is a freelance writer and Public Information Officer, and occasional contributor to TheDisneyBlog.com. He resides in Anaheim with his wife, daughter, son, and dog. Ken can be reached directly at Kenversations[at]flash[dot]net and http://www.facebook.com/pellman.

The views, opinions and comments of Ken Pellman, and all of our columnists and reviewers, are not necessarily those of LaughingPlace.com or any of its employees or advertisers. All speculation and rumors about the future of the Walt Disney Company are just that - speculation and rumors - and should be treated as such.