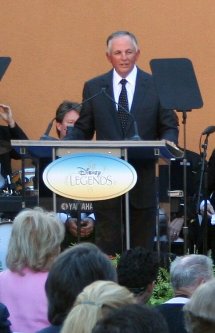 In introducing the next honoree, Cook evoked the familiar story of Cinderella. Burny Mattinson, fresh out of high school, simply walked up to the gate at he Disney Studio with a portfolio under his arm. After working in the mailroom for six months, he began his real career as an in-betweener on the 1955 feature Lady and the Tramp. He went on to work on Sleeping Beauty and101 Dalmatians, before beginning a twelve year stint with Eric Larsen, with whom he worked on Disney television, and such features as The Sword in the Stone, Mary Poppins, The Jungle Book, and The Aristocats. 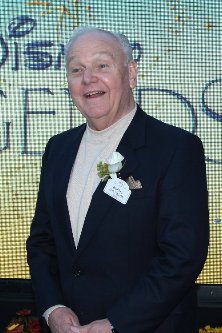 Mattinson then worked with Ollie Johnston as the key animator on Winnie the Pooh and Tigger, Too. After creating storyboards for The Rescuers, his suggestion for a featurette based on a Disney Christmas album became Mickey’s Christmas Carol. Work in later years included The Great Mouse Detective, Beauty and the Beast, Aladdin, The Lion King, Pocahontas, The Hunchback of Notre Dame, and Mulan. His most recent contributions were for the short subject How To Hook Up Your Home Theater with Goofy. Summing up his staggering list of accomplishments, Cook finished, “He is now, officially, a Disney Legend.”

As he surveyed the crowd, Mattinson began, “In the course of working here for 55 years you work with a lot of talented people.” He singled out three in particular: Marc Davis, Eric Larsen, and Joe Grant. “They mentored me,” he said, “They were my pals.” He especially thanked them, as well as the committee that had selected his for this honor. “Thank you again,” he concluded. 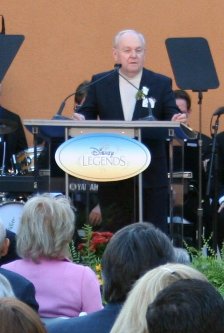 “Sometimes, even a talent as great as Walt Disney’s needs to be challenged,” began Cook in his next introduction. The next honoree, he continued, challenged Walt’s style for 14 years. As the work of Walt Peregoy meshed well with that of Eyvind Earle, the two collaborated on the Academy Award winning short Paul Bunyon. Peregoy was lead background painter on Sleeping Beauty, before going on to create the distinctive, contemporary look of 101 Dalmatians. After working on The Sword in the Stone, Mary Poppins and The Jungle Book, he left for a few years, returning in 1977 to contribute designs for Epcot in Florida. A recognized fine artist in his own right, Cook summed up the introduction with the words, “Please help me celebrate the work of Disney Legend Walt Peregoy.”

Peregoy looked over the crowd before quietly saying, “I don’t know how to do this.” He admitted that he had been told by relatives, co-workers and friends to keep his mouth shut! But, he continued, everyone always heard about the famous—now they would hear about the infamous. After quitting high school at 17, he said, he walked through Disney’s front gate. (Not like today, he added.) As he wound up, he said, “You’ll have to excuse me. I’m very old now. But one thing I don’t forget is working for the real legends. If I’m a legend, no one is a legend.” 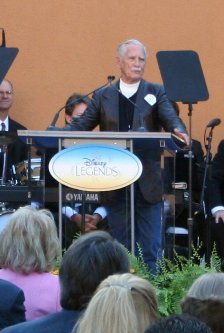 Peregoy shared a series of recollections from his years at Disney. As a fine artist, he said, he never “sold his soul,” not to Walt, not to Ken Anderson, and not to Marc Davis. “I was five years in a schlock shop—animation,” he said. He described the slow route from in-betweener, to clean up, to break down, and, if one was lucky, to an assistant.

After being asked to draw a picture of a woman at a sewing machine, there was consternation that his work wasn’t realistic enough. The personnel director said, “I don’t know what I’m going to do with you.” But Eyvind Earle burst in, saying, “Walt can paint the backgrounds for Sleeping Beauty.” Pergoy proudly asserted that he painted more backgrounds than anyone else, and, he added, “even better than Eyvind!” He was especially proud of what he achieved in the company of so many great artists.

He recalled the first union meeting of the “lowly in-betweeners.” He approached animator Milt Kahl, to see if the animators would join them. “I got mine, you get yours,” was his brusque reply. After heated words, the two became friends. Kahl later shared his work on Madame Medusa with him. Peregoy remembered sharing meals with the legendary animator.

Nearing the end of his comments, Peregoy referred to animation as the 20th century’s greatest art form. With a twinkle, he said, “If Leonardo da Vinci could have had it our way, he would have animated the Last Supper.” 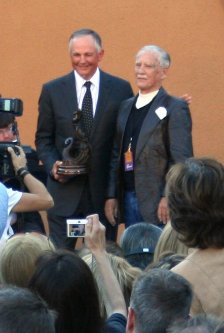 Dick Cook again took the stage, and offered a quote from film critic and author Leonard Maltin: "Some people will tell you that music was a key ingredient of Walt Disney's success. Don't you believe it. Music was the foundation of Walt Disney's success." Cook then offered a look at composer Oliver Wallace’s background. Starting out as an organist for silent movie houses, Wallace learned to match music and visuals. In his Disney career, he composed some 30 miles of soundtracks. His film work included the Academy Award winning score for Dumbo, as well as Cinderella, Alice in Wonderland, Peter Pan and Lady and the Tramp. He created memorable music for many Disney shorts. Wallace also contributed music to such notable songs as When I See an Elephant Fly, Pink Elephants on Parade, and Der Fuerher’s Face. For television he was Emmy nominated for the Disneyland program. Feature film credits include Darby O’Gill and the Little People, Ten Who Dared, and The Incredible Journey. In his career he received five Academy Award nominations.