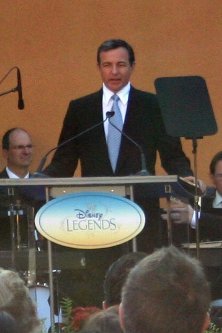 On a blustery day in October, the Walt Disney Company honored its eleven newest Legends in a ceremony at the Disney Studios in Burbank. In his opening comments, CEO Bob Iger said, “Over the decades, the name Disney has come to be synonymous with excellence, a dedication to craft, and a devotion to both creativity and innovation.” He continued, “This heritage was founded on Walt Disney’s extraordinary skills, and drives our company to this day.” Disney, he went on, has endured because of its artists, technicians, performers, executives and visionaries.

Before introducing the first honoree, Iger recognized the sculptor of the Legends Award, and explained the significance of the design. The spiral stands for imagination, the power of an idea. The hand holds the gift of skill, discipline, and craftsmanship. The wand and the star represent magic, the spark that is ignited when imagination and skill combine to create a new dream.

“Our first two honorees come from ABC TV,” Iger began, “and their lives and careers richly represent the attributes we celebrate with the Disney Legends Award.” In describing Barbara Walters, Iger stated that such terms as “pioneer, indefatigable, professional, unrivaled, one-of-a-kind, competitive, accomplished, and a real star” were often used. To these he added a few of his own: “kind, generous, a true colleague, and a real friend.” Iger pointed out that he had worked with Walters for over 25 years. 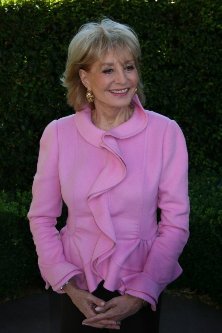 Iger mentioned a few memorable moments from Walters long career: interviews with Sadat and Begin, Ronald Reagan, the Shah of Iran, Saddam Hussein, and the most watched news related program in history, her interview with Monica Lewinsky, seen by 74 million Americans. “No one in business will ever have a highlight reel as good as Barbara’s,” he concluded.

After mentioning her distinguished career at ABC News, Iger shared a personal anecdote. It was in 1976, a time when Iger was in a “very low” production job. He accidentally intruded into her dressing room as she was having her makeup applied. As he attempted a red-faced retreat, Walters put him at ease, even inquiring after his name. For the next year, Bob Iger said, she always called him by his name: Jim. As the audience laughed, Iger smiled, “Knowing Barbara, her heart was in the right place.”

In accepting her award, Walters began, “Oh Jim! Thanks so much! To be able to walk out with Jim and Mickey. Who could have more?” Walters first marveled at the company she was joining. “Nobody ever thinks of themselves as a legend,” she said. Walters pointed out that although Bob Iger had joined ABC two years before she had, both were still with the company, and both had grown in their roles. 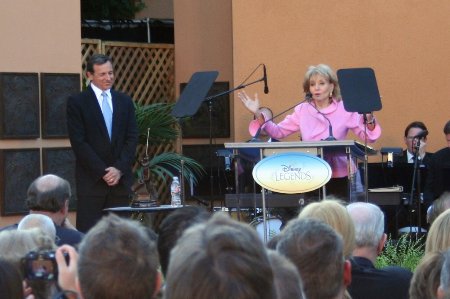 Walters went on to speak of Anne Sweeney, the current President of ABC. Originally hired as a page, Sweeney claimed that she had been told not to say hello to Barbara Walters unless she had first been spoken to. “I guess because even then I had visions of being a legend,” teased Walters. “Fortunately, even then, in those days I was nice to her. Thank God!”

Sharing an anecdote from her autobiography, Audition, Walters spoke of her maternal grandmother. On her death bed, with her seven children gathered around, the lady claimed that she was a virgin. When it was gently pointed out that this just wasn’t possible, that she must have been with her husband at least seven times, she replied, “Yes, I know, but I never participated.” As the crowd laughed, Walters pointed out, “I have been participating for all these years at ABC, and believe me, it’s much more fun when you participate.”

“I guess I’ve been around a long time,” Iger began his next introduction, as he realized he had worked for many years with the day’s second honoree. “He was born in Southern California, went to Bakersfield High School, and he graduated from USC. Now, for those of you who really know Disney, I am not talking about Dick Cook!” As the crowd chuckled, Iger went on, “Frank Gifford was a great athlete, a fine and versatile broadcaster, and he even acted in a few movies. You remember Darby’s Rangers and Bonzo Goes to College?”

Iger went on to Gifford’s sports career highlights, including 12 seasons with the New York Giants, the NFL’s MVP in 1956 and induction into the NFL Hall of Fame in 1977. “He was a great football player,” concluded Iger. He then became a great broadcaster, best known as the play-by-play announcer for ABC’s Monday Night Football. Iger referred to the team of Gifford, Howard Cossel and Don Meredith as, “the most memorable and the most colorful team in all of sports television.” In addition to his 27 years on Monday Night Football, Gifford also called the action for countless other sports on ABC, including the Olympic Games.