by Jim Miles (archives)
April 4, 2002
Jim looks at some actors who had early roles with Disney that he wish had gone on to Disney careers.

I love the scene in the 1965 comedy That Darn Cat when Dean Jones tries to fingerprint the cat. That was Jones’ first film of many for the studio, in which he was cast after Walt Disney saw him in the television show Ensign O’Toole, which aired right before Disney’s own show. He later appeared in The Horse in the Gray Flannel Suit, and in it, there’s a great scene where he loses his temper and trainer Suzie Clemens puts him in his place. In 1997’s That Darn Cat, the only scenes in the whole movie worth watching are with him and Dyan Cannon.

Similarly, Walt Disney was looking to cast a role in Swiss Family Robinson when he watched the British film Tiger Bay to see John Mills. Not only did he find his father Robinson, but he also saw John Mills’ very talented daughter Hayley. Even though Pollyanna was not a financial success, Disney knew talent when he saw it, and Hayley Mills went on to star in some of the studio’s best films. It is amazing that her variety of characterizations are so diverse. With a less capable performer, an actress could have been playing the same character in a different movie, but Mills’ talent uniquely shines in each film. 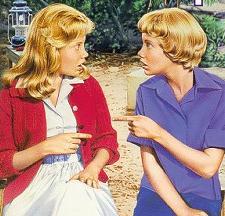 Even after Disney’s death, the studio picked up on some very talented performers. While Napoleon and Samantha and One Little Indian are both lackluster outings, the talent of a young Jodie Foster was undeniable. Her two later Disney films, the hilarious Freaky Friday and the touching Candleshoe, would be glowing testaments to her versatility even had she not already been nominated for an Academy Award for the non-Disney Taxi Driver.

These actors got their Disney breaks because Walt Disney saw the importance of establishing a studio of stars. Part of this was the now defunct studio system, where actors signed exclusive contracts with studios. For Disney, some of these were stars of his own discovery, such as the irresistible Annette Funicello, while others were people whose talents allowed for a diverse body of work, such as Tommy Kirk and Brian Keith. Either way, the effect was a sea of familiar faces that, along with the name Disney, sold his films. Because of this, despite having had many other film roles, many people still associate Fred MacMurray, Dean Jones, Hayley Mills, Suzanne Pleshette, and other such actors with the Disney studio.

Nowadays, Disney stars are few and far between. Jonathan Taylor Thomas, who hit it big with the Touchstone show Home Improvements, appeared in several of the studio’s less fantastic live-action fare. Tim Allen did better with his Disney work, and, with the sequel to The Santa Clause, he will be making his third live-action film for Disney. But with the minor exception of a few others, such as Doug E. Doug, Disney has not had many true Disney stars since the 1970s. This is sad considering that Disney has played host to a potpourri a very talented actors, people whose personality and ability scream for more films, but without any strong studio guidance, their talents have never been tapped to create the modern day Disney star. Recent Academy Award winner Jennifer Connelly, Reese Witherspoon, Christian Bale, Kevin Spacey, and Paul Walker are just a few of the stars who have appeared in Disney films before their big breaks, stars whose talents could have been used by the studio to create a brand.