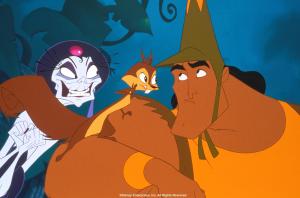 In contrast, all of the other members of The Emperor's New Groove cast shine. Pacha, when he's not dodging llama insults, shares some giggle-inducing moments with his rascally family: his strong-willed (and very pregnant) wife ChiCha (Wendy Malick) and his two mop-topped tots, Tipo and Chaca (Elia Russell Linnetz and Kellyann Kelso). Even minor characters such as a chatty squirrel and a brittle old peasant ("Beware the groove!") have their own funny bits.

But it's the one-two comedic punch of Yzma and Kronk (the funniest odd couple on screen since Harold and Maude) that steals this movie, hook, line and sombrero. Theirs is a strangely synergistic relationship, the full depth of which is barely hinted at in this G-rated venture.

With her Venus Flytrap-eyelashes and bony frame, Yzma is a direct decedent of such comic Disney villains as Cruella de Vil, Captain Hook and Madame Medusa. She has yearned for high style and regal accruements all her (long) life, but is constantly tripped up by the lunacy surrounding her. Eartha Kitt, who's most famous role to date was as another campy villainess, the Catwoman in the classic Sixties Batman series, is perfectly (or should that be 'purrrrfectly'?) cast here, joyfully sinking her claws into the role's operatic eccentricities.

Patrick Warburton, best known for the dim-bulb, hunky mechanic Puddy on television's Seinfeld, brings a droll charm to the befuddled Kronk. He plays him as a sensitive soul trapped in the body of a linebacker. He may work for the bad guys, but he's not evil ... let's just say he has fallen into the wrong crowd. Kronk is more prone to whipping up a batch of spinach puffs then whipping a foe into submission.

In another departure from the Disney norm, the film is heavily influenced by the style of legendary Warner Bros. short director Chuck Jones, most notably in the character of Kuzco. Just like his prankster predecessor Bugs Bunny, Kuzco uses every trick in the Looney Tunes handbook, from anachronistic dialogue to breaking the 'fourth wall' to talk directly to the audience. He even employs a classic comic device, dressing up as a woman to gain access to a jungle 'truck stop' called Mudka's Meat Hut. Some of these gags work well, but when they don't, the filmmakers' attempts at hip cleverness are painfully obvious, throwing off the film's pacing, it's own 'groove,' as it were.

There was a lot of potential in this project in it's many forms ... a couple more whacks at this piñata would have revealed all of the goodies inside. 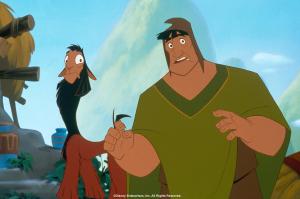