Jim Hill: From the Archives
Page 2 of 5

So can you understand how -- when Roger Allers began having story problems with "Kingdom of the Sun" -- Disney Studio management was reluctant to intervene. After all, this was the genius who'd turned that lousy lion story into a box office behemoth. The executives at the Mouse House were certain that -- if they just gave Roger enough time -- he'd get everything straightened out and deliver another monster hit for the studio.

And Allers sure had some intriguing ideas when it came to adapting Twain's oft-told story to a South American setting. Folding in a dollop of magic (After all, this was supposed to be a Disney animated feature, wasn't it?), Allers struggled to make something new out of a what was obviously a pretty familiar story.

What follows is a close approximation of Roger Aller's version of the proposed "Kingdom of the Sun" storyline: Manco, a handsome but haughty prince (voiced by David Spade) has grown bored with his pampered life in the palace. One day, Manco discovers that he has an exact look-alike in Pacha, a kindly llama herder (voiced by Owen Wilson) who's passing through the kingdom. To get a taste of freedom, the prince persuades Pacha to trade places with him for a day -- little realizing that their switch has been observed by the evil court sorceress, Yzma (voiced by Eartha Kitt).

Yzma sees this switch as her opportunity to gain control of the kingdom. Using her magic to turn Manco (when he's disguised as the llama herder) into a llama, the court sorceress then tells Pacha (who's now masquerading as Manco) that she knows that he's really not who he's pretending to be. Ymza threatens to expose Pacha (which would result in instant beheading) unless he does her bidding. 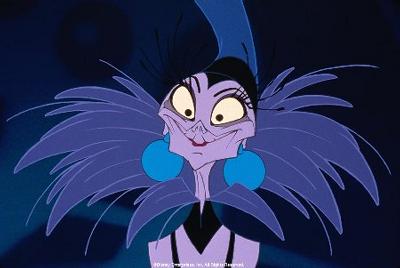 And what does Yzma want? Well, it turns out that the sorceress once was a great beauty ... Now, she's the Incan equivalent of Cruella De Vil. Yzma wants desperately to regain her lost looks. To do this, she'll need Pacha -- who's pretending to be Manco -- to help her pull off a horrible scheme. What must Yzma do to reclaim lost youth and beauty? Well, since she blames the sun for prematurely aging her, Yzma wants the kingdom plunged into eternal darkness.

I know, I know. This sounds like a pretty odd story for a Disney animated feature ... But the real problem with "Kingdom of the Sun"'s story wasn't its oddness, but its predictability. Would it really surprise you to learn that the pampered prince learns humility through his experiences as a llama? That Pacha -- while masquerading as Manco -- falls in love with the prince's betroved -- the head-strong-but-lovely handmaiden, Nina? That the three of them must work together to defeat Yzma's terrible plan? That "Kingdom of the Sun" has a happy ending?

Mind you, Allers' original storyline for "Kingdom of the Sun" did have its moments. The proposed film did have a wild climax where -- in a last ditch effort to drive off Supai, the force of darkness that Yzma has summoned up to engulf the entire kingdom -- Pacha lassos the sun and pulls it down to earth. *THAT* certainly would have been a memorable way to defeat the villain.

Outside of the ending of the film, as well as the few moments of pomp and pageantry that Roger managed to cram into the storyline, "Kingdom of the Sun" 's script still had some real problems. In spite of the story's colorful South American setting, the plot was utterly predictable. At test screenings, the film just sort of laid there -- failing to engage the audience.

But Disney executives -- knowing the magic that Allers had worked with "Lion King" -- still held out hope that Roger would find a way to fix "Kingdom of the Sun." After all, it wasn't like the whole project lacked promise. After all, Grammy award winning pop star Sting had written several songs for the film. (And Sting's demo tracks for the songs *DID* sound great. It was only after the vocal talent that Disney had hired to play characters in the film sang Sting's songs that studio executives realized that the score had some problems). And two of Disney's top animators -- Andreas Deja and Nik Ranieri -- were doing wonderful work with Yzma and her evil sidekick, a talking talisman called Hucua (voiced by Harvey Fierstein).

In fact, Disney was so confident in "Kingdom" at this point that it allowed conceptual artwork from this earlier version of the film to be featured in John Canemaker's Paper Dreams: The Art and Artists of Disney Storyboard (click here from info from Amazon.com). You'll find images there of the preliminary versions of Pacha and Nina, as the two character slip away from a party at the palace..

But -- after three years of active development (and a year and a half of production) -- it became obvious to Disney management that Roger Allers wasn't going to fix "Kingdom of the Sun." That's because Allers didn't think that there was anything wrong with his version of the film. Roger honestly thought that "Kingdom" -- as he had originally envisioned it -- would eventually win over an audience, provided that he was allowed to complete it.

(It's worth noting here that many of the animators who worked with Allers on his version of "Kingdom" also agree that Roger's version of the film would have ultimately been successful if Disney executives hadn't opted to interfere with the production. But that's the sort of guy Roger is. He inspires great loyalty in those that work for him. These animators would have gladly followed Allers off a cliff if he lead them that way ... Which -- co-incidentally -- was where Disney management thought "Kingdom of the Sun" was headed under Aller's leadership.)

Things got so bad that "Emperor" producer Randy Fullmer recalls how a top Disney executive came into his office in the summer of 1998 and -- holding his fingers a quarter inch apart -- said "Your film is this far away from being shut down."

Obviously, something had to be done.