Rendez-vous des Stars
The Art Deco theming is continued to the Television building’s nearest neighbour, the Rendez-vous des Stars restaurant. The restaurant is at the furthest limit of the Production Courtyard and shares a kitchen and building with its BackLot neighbour, Backlot Express despite being themed differently. The Art Deco theme extends to the restaurant itself which is a buffeteria affair offering meals from across Europe. 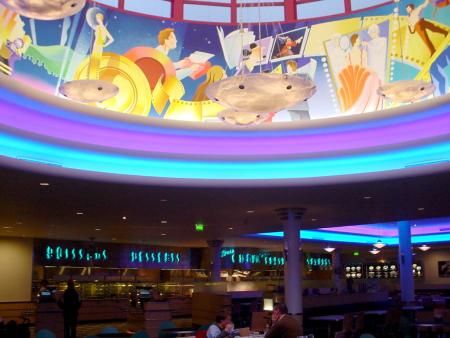 Those familiar with the Studio Commissary at the Walt Disney Studios in Burbank will recognise the inspiration. The cast members are even dressed similarly and the food is as well prepared and served as that at the Commissary. The offering is certainly more appropriate than the ABC Commissary at the Disney MGM Studios and more in keeping with the studios theme. The huge framed black-and-white prints of directors and their stars eating at famous Hollywood haunts is a nice touch. I overheard many guests trying to remember the names of each star and director. One side of the dining room is housed in a circular extension with glass walls and a beautiful Art Deco mural around the upper limits of the roof. 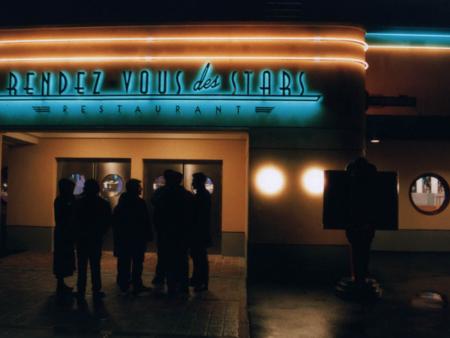 The neon lights illuminate the restaurant after sundown.
Click here for a much larger version of this picture
(1024 X 768, 83,269 bytes)

The food is excellent, but the restaurant is destined to follow the River Belle Terrace into queuing hell with only single file traffic permitted, entering the queue area. Guests on the first preview day were queuing over 30 minutes during the peak lunch traffic.

Production Courtyard Stage
The area bordered by the Walt Disney Television Studios, CineMagique and Disney Studio 1 has at its heart, a small open-air stage. The Entertainment team budget was approved too late for a permanent show to be added to this area and so, on the first preview days, a gospel choir dressed in orange robes belted out gospel hymns and hits from Disney movies like Hercules. The ensemble took the name “Sister Act 3: Back to the Studios” and were rewarded with a sizeable crowd. The performance was accomplished and entertaining, although the sound levels and the cordless headset microphones were not working to specification. Towards the end of the show, Pluto, Mickey, Goofy and Chip ‘n’ Dale, adorned in their Studios clothes entered the arena to party with guests to the show finale. 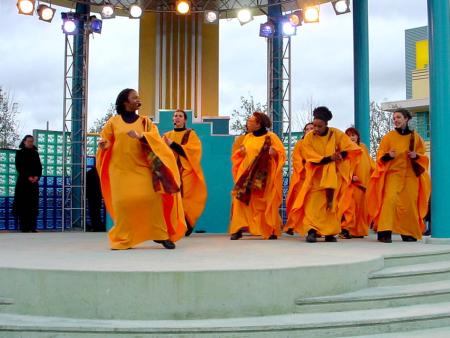 The gals doing their gospel thang in blustery conditions!
Click here for a much larger version of this picture
(1024 X 768, 145,386 bytes) 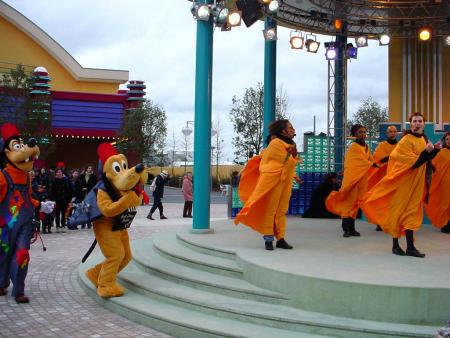