#40 - "She didn't land on anyone, did she?" Nigel Channing, Honey I Shrunk the Audience

Occasionally Disney attractions venture into the macabre, particularly in the 3-d films. Are there too many other times that Disney might reference guests being crushed by a huge object as the source of a joke?

Making of Me's script was really quite remarkable, especially considering the strange nature of the attraction itself. In tackling what has to be one of the most difficult concepts for a Disney attraction to date, the Making of Me managed to pull together a heartwarming script that deserves to be admired. Sex can be a very sensitive subject, but the Making of Me gave it respect and dignity that I've honestly seen in almost nothing else. 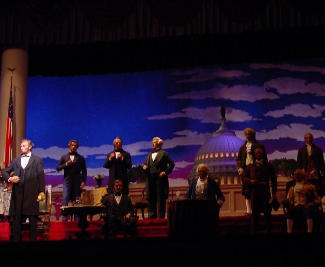 #38 - "In this Hall of Presidents, we look upon a mirror of ourselves, the leaders we have chosen to safeguard our rights and our ideals, to imagine the future, and to embrace its challenges." - Narrator, Hall of Presidents

The Hall of Presidents has stood the test of time for one basic reason, which is that seeing all of the presidents standing on one stage is a very powerful image. With this line the attraction transforms from the mere spectacle of Audio Animatronics, to something that is much more thought-provoking. As the names of the presidents are read, moments in history pass through our mind. "A mirror of ourselves" is a fantastic way of putting the representation the presidents have to their time and to the people of that time.

#37 - "There is a great and lasting truth about the family of man. A truth which separates us from all the other creatures of the Earth. We can dream." - The Sage of Time, Tapestry of Nations

#36 - "Verged on the threshold of infinity, we see our world as it truly is: small, silent, fragile, alive, a drifting island in the midnight sky. It is our spaceship, our Spaceship Earth." - Spaceship Earth (pre 1986)

The original script for Spaceship Earth shows an even greater influence from the works of Ray Bradbury. It's quotes like this that show just how versatile theme park attractions can be.

#35 - "Impossible? No, sir. This may be improbable, but believe me, it's not impossible." - HG Wells, Timekeeper

The second quote from the great Circlevison 360 film Timekeeper. 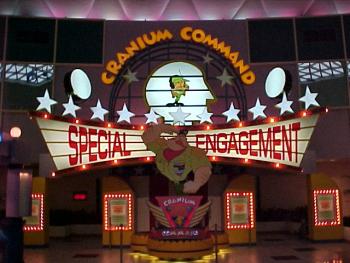 This piece of advice was repeated often throughout the Cranium Command show. It's very interesting that the "moral" if you will turned out to be about keeping calm and not getting overly stressed under extreme pressure situations. It's even more interesting when you consider the movie was played at a theme park, where guests are often stressed out over long lines and the heat.

#33 - "Now some person I don't even know reminds me there's no eating, drinking, smoking, or flash photography allowed in my dream." - Ellen, Ellen's Energy Adventure

Another self referencing quote which has to be one of the more creative introductions to a safety spiel in theme park history.

A somewhat corny line, but try standing in the pre-show waiting area at Rock 'n Roller Coaster and not hear the other guests recite this along with the manager.

The original Country Bear Jamboree has a wonderful folksy charm that has kept it popular now for over 30 years.