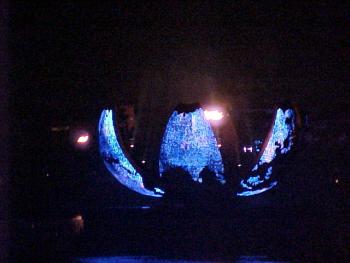 Sometimes simplicity works best and I can think of few better examples than the opening narration of Reflections of Earth. Illuminations deals with so many concepts regarding the earth's history that it would be far too easy to try to explain away the whole show to the audience. Instead, the creators wisely let the show speak for itself.

The opening film for the Living Seas pavilion has often been ridiculed by Disney fans as being too pretentious and boring. The film did however, have this one famous line that fans would go on to repeat on a regular basis.

#28 - "Ha, a figment of imagination!" - Dreamfinder, Journey Into Imagination

The original Journey Into Imagination had a big impact with many fans of the classic dark ride genre. Figment would turn out to be one of the most popular original characters created for a theme park.

In a somewhat controversial and certainly trendy move, Disney decided to use Michael Jackson to star in what would become the equivalent of a 3-D music video. With this line, Captain Eo reveals his secret weapon, which turns out to be his musical talent. 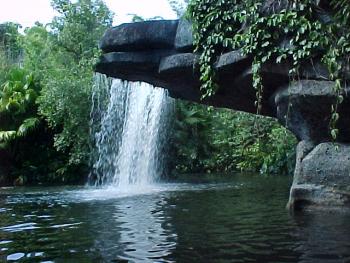 This is the first quote from the Jungle Cruise to appear on this list. The Jungle Cruise is one of the most script heavy attractions currently operating in Walt Disney World. With the passing of time the show scenes along the river have become less of the draw than the skipper's witty commentary about the ride. While there are countless jokes used on the Jungle Cruise that keep the guests groaning, this is one of the more famous. It's an old standard joke made even funnier by the simple fact that the skipper is trying to undermine another Disney attraction. This sort of self deprecating humor is not often found in the very professional and self-important Disney attraction scripts.

With his familiar voice and powerful presence, walter Cronkite made for a very good narrator for Spaceship Earth. This is the second of three quotes from Spaceship Earth.

"Something goes terribly wrong!" was a concept mostly unheard of before Star Tours. While other attractions had exciting things happen that weren't necessarily planned, Star Tours made it abundantly clear that your flight was going seriously awry. While the concept seems clichéd now, the idea of sending guests the "wrong way" was rather novel in its time

#23 - "Buenas dias senorita, my siestas are getting shorter and shorter." - Jose, Tropical Serenade

We've all seen it. The host comes out to the frozen bird, taps his stick a few times and magically Jose comes to life before our eyes. The original Enchanted Tiki Room show was classy with a capital "C." Taking its cue from lounge acts at the time, the jokes and puns used still entertain audiences at Disneyland (where the original show still is running).

#22 - "Some days you eat the bear, other days the bear eats you, but always dress for the hunt." - Adventurer's Club

The Adventurer's Club is one of the most unusual attractions on Walt Disney World property. Part bar, part lounge show, part improvisation, the Adventurer's Club is a genre to itself which probably explains the rabid fan base it has gathered over the years. This quote is taken from the club's motto, and is used in a few of the nightly shows.

#21 - "We wants the redhead!" Pirates, Pirates of the Caribbean

In this classic scene from Pirates of the Caribbean, the auctioneer at a wench auction tries desperately to sell a rather portly looking woman. The pirates across are much more excited about the more provocative looking redhead also in line. The humor depicted in this scene is surprisingly adult for a Disney attraction, especially one from the late 60s. It has been often said that Pirates of the Caribbean gives a small glimpse into the more dark sense of humor of Walt Disney.