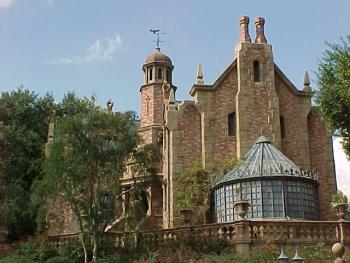 #20 - "Do not pull down on the safety bar please, I will lower it for you." - Ghost Host, Haunted Mansion

In a very clever move, writers made what was a simple mechanical procedure into a chilling effect.

This "oldie but goodie" quip comes straight out of the days of vaudeville.

This motto of the amazing attraction Horizons has also been used for the Disney Company itself. The optimism of the quote reflected the dream like future created in the Horizons show scenes. The attraction would sadly become one of the last futurist attractions built by Imagineering, signaling the end of an era.

Few Disney attractions have a better script than American Adventure, which is quite remarkable considering it has the almost impossible task of compiling 200+ years of American history in less than a half an hour. This line, which is one of the last lines in the show is a fairly profound statement on human nature.

MuppetVision 3Ds irreverent humor has made the show a classic among Disney park fans. 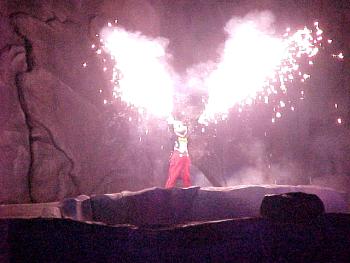 After letting the villains have their way, Mickey finally lays the smack down. And the audience goes wild.

#14 - "Now I will raise the safety bar, and a ghost will follow you home!" - Ghost Host, Haunted Mansion

This chilling conclusion to the Haunted Mansion is one of the more impactful lines heard in a Disney park. The concept that a ghost will follow you home, insuring your return to the mansion itself is delightfully dark. One wonders how many children keep looking around to find the ghost that followed them home. 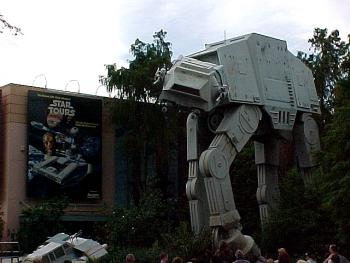 Often quoted due to the over the top delivery by Paul Reubens, it's at this point that the audience knows that they are in serious trouble. Thankfully, Rex not only masters the brakes, but manages to put the Starspeeder 3000 into light speed, through a comet, and down into the narrow channel of the Death Star without getting destroyed. Maybe R2D2 is really controlling the whole operation.

#12 - "We invite you, if you dare, to step aboard because in tonight's episode you are the star, and this elevator travels directly to . . . The Twilight Zone." Rod Serling, Twilight Zone Tower of Terror

What fans of the television show aren't just a little bit nervous when they are told that they are stepping into the Twilight Zone. Considering the mysterious nature of the television show, telling guests they're going to the Twilight Zone creates an eerie mood of unpredictability. The attraction plays off of that "what will come next?" feeling for the rest of the tour.

#11 - "When hinges creak in doorless chambers...and strange and frightening sounds echo through the halls...wherever candlelight flicker...where the air is deathly still...that is the time when ghosts are present...practicing their terror with ghoulish delight." Ghost Host, Haunted Mansion

The Haunted Mansion is home to arguably the most literate script in any theme park attraction anywhere. It's not often you hear phrases such as "cadaverous pallor" or "disquieting metamorphosis." Obviously, the creative team decided to use words for the purpose of intimidation. It's hard to imagine the Haunted Mansion without its refined writing.