First to talk about Harriet was her daughter, Pam Burns. Looking over the assembled congregation, she first thanked everyone for coming all the way to Santa Barbara. There were family members, of course, and friends of many years’ standing from the community. There was also a scattering of admirers, and the sizable contingent of Disney Imagineers, past and present.

Burns spoke of this day as the culmination of quite a ride. “No one is ever prepared to lose a mother,” she said. She noted it was especially hard, when your mother was one who always gave 110%. She quoted the words of friend and co-worker Blaine Gibson, who said, “Good enough was not for Harriet; it had to be perfect.” Burns asserted that, when Harriet’s heart “sprang a leak,” she was determined that she would not carry on with “an old lady heart.” Informed by several specialists that repairing her heart would prove too risky, she sought, and found, an expert referred to as the “Walt Disney” of heart surgeons. And she was at peace with her decision to move forward, determined either to get better, or check out.

Burns paused before noting, with a chuckle, that one of Harriet’s granddaughters claimed, “Grandma never wanted to be an old lady. She got her wish. She refused to turn 80.” Noting that this would have been her mother’s 80th birthday, Burns thanked everyone for coming out on a weekday afternoon in August. Her eyes turned upward as she said, with amusement, that Harriet was no doubt sitting somewhere up near the chandeliers, surrounded by angels, worrying about so much fuss over her.

Harriet, Burns continued, was a great mom. But before that, she was a great teacher and world traveler. Her own father insisted that she study something practical—Home Ec. But young Harriet Tapp went for art and French, instead. Her childhood nickname was “Tippy,” making her Tippy Tapp.

As a mother, Harriet’s magic wasn’t limited to her job with Walt Disney. She and her husband remodeled their “typical” California ranch home. Burns recalled her mother gold leafing glass panels, then mounting them to the ceiling of the dining room.

Holidays were very special. One Halloween her witch costume included elements from Disneyland’s Haunted Mansion. At Christmas time their outside lights were a subtle green and blue. Inside, it was Santa’s Village, complete with discarded items from Disneyland’s never-built Rock Candy Mountain. Harriet insisted that gifts be beautifully wrapped, with hand made bows that often concealed an extra surprise. Sending out cards was a major operation. There were religious Christmas cards, Hanukkah cards, and non-religious cards for secular friends. Each was chosen for the appropriate recipient. Harriet always shopped for next year’s cards and wrapping papers during the day-after-Christmas sales. Burns noted that, in cleaning out her mother’s house, they found a whole room full of gift wrap.

Harriet brought the same care and attention to detail to her hostessing. There was always a variety of wines to be served, even though she didn’t drink. After a party, thank you notes were promptly sent out. Sometimes, Burns noted ruefully, there were thank yous for the thank yous!

Harriet particularly loved to give children’s parties. One year, a jungle themed party featured a menagerie of whimsical animals. Out on the lawn, a mysterious box invited discovery. When it was examined, out popped Grandma Harriet. Burns noted that it was her mother’s influence on her own daughters that led Chelsea to become an artist/designer, and Haley to become a singer/performer.

Burns thanked everyone who contributed tributes to her mother. She was especially touched at the number that was offered on line. She read excerpts from two, including one that referred to her mom as “The Unsinkable Molly Brown.”

In closing her remarks, Burns again thanked everyone who attended this 80th birthday celebration, adding that she just knew her mother would want to write a note to each and everyone who was there. “The Unsinkable Molly Brown has ascended to new heights,” she concluded.

Next offering his reflections on Harriet Burns was Marty Sklar, Disney Executive Vice President and Imagineering Ambassador. Before beginning his remarks, he mentioned that the oft maligned Rock Candy Mountain never was finished because everyone in the model shop kept eating it. 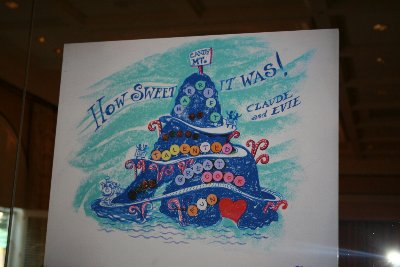 Rock Candy Mountain, depicted in a piece given Harriet at her retirement from Disney)
Click here for a much larger version of this picture

“They called it the Model Shop,” he said, “Before the PR types got hold of it and called it Dimensional Design.” The shop, he continued, was insurance for Walt Disney that he wouldn’t be fooled by pretty pictures. Models ensured that every element would be placed to give Walt’s guests the best possible experience. The Model Shop, Marty stated, was the heart of WED.