The initial casting of the London stage production of Shakespeare in Love has been announced.  This production is based off the Miramax film that won the Best Picture Oscar in 1999.  Disney owned the movie’s distributor, Miramax at the time so it is tied to this stage production.

Disney and Sonia Friedman Productions are delighted to announce initial casting for star-crossed lovers Will Shakespeare and Viola De Lesseps in the forthcoming stage production of Shakespeare in Love. 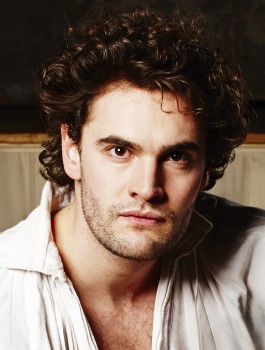 Tom Bateman will play the role of Will Shakespeare and Lucy Briggs-Owen will play Viola De Lesseps.

Tom Bateman’s theatre credits include ‘Antonio’ in The Duchess of Malfi at The Old Vic; ‘Claudio’ in Much Ado About Nothing at the Wyndham’s Theatre; ‘Richard’ in The Lion in Winter at the Theatre Royal Haymarket and ‘Dante Gabriel Rossetti’ in Lizzie Siddal at the Arcola Theatre. He has played major roles in TV series Da Vinci’s Demons and The Tunnel. 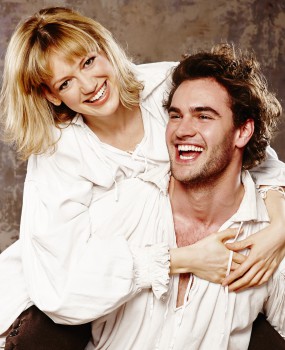 Lucy Briggs-Owen’s theatre credits include: ‘Maryna’ in Boris Godunuv, ‘Princess’ in The Orphan of Zhao, ‘Helena’ in A Midsummer Night’s Dream, ‘Luscinda’ in Cardenio and ‘Anne’ in The City Madam all for the Royal Shakespeare Company; ‘Brooke Ashton’ inNoises Off in the West End; ‘Mrs Fainall’ in The Way of the World at Sheffield Crucible; ‘Cressida’ in Troilus and Cressida at the Barbican and on International Tour; ‘Vivie Warren’ in Mrs Warren’s Profession  in the West End and on Tour; ‘Blanche Satorius’ in Widowers’ Houses at Manchester’s Royal Exchange; ‘Sybil Chase’ in Private Lives at the Hampstead Theatre; ‘Cecily’ in The Importance of Being Earnest; and most recently as ‘Olga’ in Fortune’s Fool at The Old Vic.

Shakespeare in Love has its world premiere at the Noël Coward Theatre on Wednesday 23 July 2014, with previews from 2 July. Further casting will be announced soon.

Based on the Academy Award®-winning screenplay by Marc Norman and Tom Stoppard, Shakespeare in Love has been adapted for the stage by Lee Hall (Billy Elliot). Featuring a company of over 30 actors and musicians, this new play will be directed by Declan Donnellanand designed by Nick Ormerod, the driving force behind the world-renowned theatre company, Cheek by Jowl. Shakespeare in Love will be produced by Disney and Sonia Friedman Productions.

About Shakespeare in Love:

Promising young playwright Will Shakespeare is tormented by writer’s block until he finds his muse in the form of passionate noblewoman, Viola De Lesseps. Their forbidden love draws many others, including Queen Elizabeth, into the drama and inspires Will to write the greatest love story of all time, Romeo and Juliet.

This sweeping romantic comedy will transport you back to Shakespeare’s London, teeming with vibrant colors, characters, music and life.

Tickets for Shakespeare in Love at the Noël Coward Theatre are now on sale online at www.shakespeareinlove.com or by calling the box office on 0844 482 5141.

Lee Hall, who has worked as a writer across theatre, TV, radio and film, won the 2009 Tony Award® for Best Book for his stage adaptation of Billy Elliot. The musical, which also won the Olivier Award for Best Musical in 2006 and the 2009 Tony Award for best musical, was based on his screenplay for the film of the same name which saw him nominated for an Academy Award®. In 2008, Hall won the London Evening Standard Award, Best Play for The Pitman Painters. Hall has been writer in residence at the Royal Shakespeare Company and Live Theatre and his screenplay for War Horse was directed by Steven Spielberg in 2011. Other theatre credits includeCooking With Elvis at Live Theatre in Newcastle, Spoonface Steinberg at the Ambassadors Theatre in the West End (adapted also for TV and radio) and Two’s Company at Live Theatre and Bristol Old Vic.

Declan Donnellan and Nick Ormerod formed Cheek by Jowl in 1981 and have since directed and designed over 30 productions for the company which have been performed in over 300 cities in 40 countries all over the world. With Cheek by Jowl, Donnellan and Ormerod have reimagined many of Shakespeare’s texts including the all male As You Like It, Twelfth Night, The Tempest, Macbeth, A Midsummer Night’s Dream, Troilus and Cressida and Othello. Cheek by Jowl is an associate company of the Barbican in London where forthcoming collaborations include ‘Tis Pity She’s a Whore from 9 April 2014 and Ubu Roi from 18 June 2014. In 1989 Donnellan was made Associate Director of the National Theatre where productions have included Fuente Ovejuna, Sweeney Todd, The Mandate and both parts of Tony Kushner’s Angels In America. Additional theatre credits include ‘Tis Pity She’s a Whore, The Changeling, Great Expectations and British premiers of Outcry, Homebody/Kabul, Sara and Lady Betty (written by Donnellan). In 2000, Donnellan formed Moscow-based company The Chekhov Festival whose productions have included Boris Godunov and Three Sisters, and recently the pair co-directed feature film Bel Ami starring Robert Pattinson, Kristin Scott Thomas and Uma Thurman. His book, The Actor and The Target, originally published in Russian (2001), has since appeared in French, Spanish, Italian, German, Romanian and Mandarin.