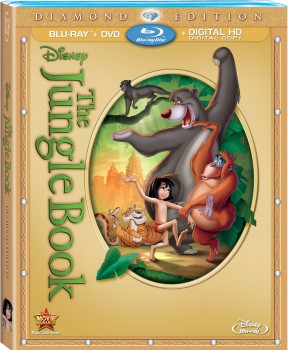 On February 11th Disney releases the ninth installment in their prestigious line of Diamond Editions: The Jungle Book. Diamond Edition status is reserved for the best-selling Disney animated films, a direct follow-up to the popular Platinum Edition line that ran from 2001 to 2009. Thus far, Diamond Editions have been offered in an abundance of confusing and inconsistent options. There have been Blu-Ray/DVD combo packs in both Blu-Ray and DVD cases, Blu-Ray/DVD/Digital Copy combo packs, and sometimes even 3D combo packs. Those uninterested in Blu-Ray have typically had to wait several weeks for a standalone DVD release. The excess of buying options seemed designed to confuse the average consumer into buying more than they wanted, and may have unintentionally hurt Disney’s brand reputation by upsetting fans.

For these reasons, Disney has scrapped previous plans to treat The Jungle Book to the same plethora of confusing options, and instead are giving consumers just two options: A Blu-Ray/DVD/Digital Copy combo pack or a single-DVD release. Both options are available on February 11th, so the 80% of consumers that have yet to adopt Blu-Ray don’t have to wait. This review is split into two sections: One specific to the Blu-Ray contents and one specific to the DVD.

All Disney fans should know the story (or lack there of) of The Jungle Book. Mowgli is orphaned as an infant and adopted by a pack of wolves in the jungle. When his presence attracts the attention of tiger Shere Khan, it is decided that Mowgli should be returned to the man-village. While being escorted by trustworthy panther Bagheera, Mowgli’s journey is disrupted by a fun-loving bear named Baloo, a boy-eating snake, an envious orangutan, singing vultures, and of course the very tiger Mowgli sought to escape. The film survives by having interesting characters and great songs.

The Jungle Book was one of several animated Disney animated films that were filmed in fullscreen (1.33:1) with the intention of being cropped in theaters, meaning the image on the top and bottom of the screen would be hidden to display the film in widescreen. This was a cost-cutting measure, as well as a way to future-proof these films for potential TV airings. Most Disney films from the 1960’s and 1970’s were matted into an aspect ratio of 1.75:1 and while the theater exhibitioner guide for The Jungle Book didn’t specify an aspect ratio, Disney claims the intended ratio for this film is 1.75:1, which is how it is presented here. Some will be disappointed that the full animated ratio isn’t offered as an option, especially considering an alternate ad for the Diamond Edition used the fullscreen image misleading some to believe it would be included.

The flawless restoration Disney did to the film in 2007 is repeated for this release. Grain has been removed, which will anger some, but line art is still in tact, preserving the look of the Xerox process and the animators’ art in a way that will please most. While the restoration is the same, this is the first time it’s been made available in 1080p high definition, which allows colors and details to standout in a way that isn’t possible on DVD. It looks fantastic.

Disney has gone back to the audio source and created a brand new DTS HD 7.1 surround sound mix. The track mostly stays faithful to the original audio mix, making little use of the surround speakers, while offering a clean and full sound. The original mono track is also offered for film purists. French and Spanish are offered as multi-lingual options, both in 5.1 surround sound.

Nearly an hour of new bonus features were produced for this release, highlighted below:

–       Music, Memories, and Mowgli – Richard Sherman, Diane Disney Miller and Floyd Norman sit down for a 10-minute conversation at The Walt Disney Family Museum to discuss their memories of the making of the film, including Walt’s death. This feature is dedicated to Diane.

–       Alternate Ending: Mowgli & the Hunter – This 9-minute storyboard reel offers a glimpse of how the story could have ended. Instead of Mowgli happening upon a girl from the man village, a hunter in search of Shere Khan finds him. Newly created storyboards are used to present this feature.

–       I Wanna Be Like You – Blake and G from Disney Channel’s Dog With a Blog take you on a 20-minute tour behind-the-scenes of Disney’s Animal Kingdom theme park at the Walt Disney World Resort with Matt Hohn, Animal Operations Director for the park. While mostly unrelated to The Jungle Book, it is a nice bit of Disney synergy and educational if you’ve ever thought about running a theme park with animals (Nahtazu).

–       Bear-E-Oke – Do you love lyric videos? If so, than you will love Bear-E-Oke. It’s just like Mary-Oke and Frog-E-Oke and any other rebranded name Disney Home Entertainment can come up with for each release. They take the audio as heard on the soundtrack and animate lyrics to them. They are entertaining, but not quite a sing-along and definitely not karaoke, as the name might suggest. Options are “Trust in Me,” “I Wanna Be Like You,” “The Bare Necessities,” “Colonel Hathi’s March,” and “That’s What Friends are For.”

–       @Disney Animation: Sparking Creativity – The @Disney Animation series returns with a 10-minute glance at a program designed to help animators share their creative ideas. While completely unrelated to The Jungle Book, it’s a nice insight into operations at the studio and features ideas used in Paperman and Frozen.

–       Disney Intermission – This feature has become standard on most high-profile Disney Blu-Ray releases. Typically, pausing the film will grant you access to videos or games that can’t be found elsewhere. Here, however, it just plays Bear-E-Oke, rendering it’s listing as a separate bonus feature misleading. There is an introduction to Bear-E-Oke by a Baloo sound-alike.

Rounding out this release are most of the fantastic bonus features that were found on the previous 2-disc Platinum Edition release.

–       The Bare Necessities: The Making of The Jungle Book – A revealing and honest 45-minute documentary on the complications the team experienced while making the film, including the death of Walt Disney near the end of production.

–       The Lure of The Jungle Book – This 10-minute featurette consists of contemporary animators explaining how this film inspired them in more recent classics like The Lion King and Tarzan.

–       Mowgli’s Return to the Wild – Bruce Reitherman explains how voicing Mowgli lead to his current career as a nature documentary filmmaker in this 5-minute feature.

–       Frank & Ollie – Not the 1995 documentary you may have thought, but a 4-minute retro discussion between the animation legends about animating Mowgli and Baloo.

–       The Lost Character: Rocky the Rhino – A 6-minute featurette about a character that was cut from the film, along with surviving audio of voice actor Frank Fontaine and surviving storyboard art.

–       Disneypedia – This 15-minute educational feature highlights the real animals that appear in the film.

–       Song Selection – The ability to jump directly to songs in the film with optional on-screen lyrics (aka sing-along feature). “Trust In Me” and “My Own Home” are not part of this feature.

–       “I Wanna Be Like You” Music Video – Every Disney fan’s favorite brother boy band, the Jonas Brothers, lip-synch to their 2007 cover of this Sherman Brothers classic.

A few of the Platinum Edition features didn’t make the leap to this release, which will cause some fans to begrudgingly hold onto those discs as well. The most noticeable miss would be 21-minutes of audio-only tracks of Terry Gilkyson’s demos from the original Bill Peet version of the film. The art galleries are also missing. Three games aimed at kids are absent: “Baloo’s Virtual Swingin’ Jungle Cruise,” “Hathi’s Boot Camp” and “Fun With Language.” Looking even farther back, a 15-minute documentary from the 30th anniversary VHS and laserdisc called The Jungle Book – The Making of a Musical Masterpiece is not included (most likely because the 45-minute 2007 feature is superior in every way). That laserdisc also contained the original theatrical trailer.

The disc opens with trailers for the Sleeping Beauty Diamond Edition, Muppets: Most Wanted and Frozen.

This release uses the same transfer as the 2007 Platinum Edition, and this DVD transfer looks identical to it. It’s a great restoration, offered here in 1.75:1 widescreen.

The following bonus features appear on the single-disc DVD release. All of the other bonus features listed in the Blu-Ray section are exclusive to that disc (which is almost all of the new content and most of the old):

The Blu-Ray combo pack comes with a digital copy, which can be downloaded in either HD or SD from your choice of services (iTunes, Amazon Instant Video, Vudu). The iTunes version replicates the Blu-Ray presentation and includes all of the bonus features on that disc.

The Jungle Book is a film that deserves to be celebrated (Disney recommends doing so every seven years). The Diamond Edition Blu-Ray is definitely an upgrade where the film has never looked better and some worthwhile new bonus features make opening the ol’ money bin a little easier for those who have already owned this film (several times on various media types). The single-disc-DVD- without-a-special-title is a downgrade if you’re a fan of bonus features. For those who have already embraced a future where movies can’t be held in your hand, the digital release is on par with the Blu-Ray in almost every way. This release is only available for a “limited time” and will be going back into the Disney Vault… sometime around April 2015.