Dave Bossert, Director of Special Projects hosted a Google Hangout to discuss Disney Animation from the Bijou Theatre at CalArts.  He was joined by John Musker Director, Animation Walt Disney Animation Studios who attended but did not graduate CalArts.  However, he was part of first character animation class at the school. In addition, he is still upset about the title of “Basil of Baker Street” being change to “The Great Mouse Detective”  He has been at Disney 37 years.

Also on the panel was Jeff Ranjo, Storyboard Artist, who attended CalArts from 1991-1994.  His first project was directing the Titans in Hercules with fellow panelist John Musker.  More recently, he storyboarded the “In Summer” sequence in Frozen

Dan Hansen, Director Character Animation at CalArts was also present.  He is a former Disney artist who said,  “Working at Disney was a great thing for me…” Following a plug for the Disney Animated iPad app, they panelist began to discuss the animation process.  John Musker could talk about the “old days” where you had to send the animation to film department.  You did not get the instant impact you get today.

Ranjo said when he first started at Disney, storyboarding was all on paper.  That has changed.  He said the new technology allows you to rearrange panels and shuffle drawings to improve the storyboard, which makes the process of tweaking the story a little easier. 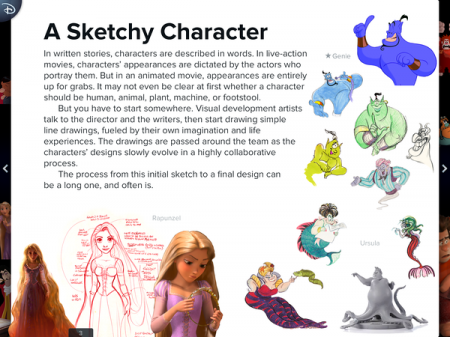 After the storyboarding the scene, they gather everyone to try and find ways to plus the scene.  These meeting can last from six hours to three days in which the scene can see a big improvement.  Describing the collaborative energy to always try and improve the film Bossert said, “These animated movies are a huge team sport.  You can’t do it on your own.”

Once the story is nailed down, then the animators have to add the acting to the scene.  The actors with computers are constantly tweaking frame by frame to get the total emotional control you need.  As Lee said, “The more work you put in, it has to look like no work was involved.” There are hundreds of control points on each character to finesse the action.  Unlike hand-drawn animation, you have to move each point to get the pose you want, instead of just being able to draw it from your mind to the paper.

As there are many animators working on small parts of a much larger film, the directors work with the animators to explain how their part fits in with the bigger picture.  And thanks to many different artists in many different disciplines, the final film can become, like The Little Mermaid and Frozen a worldwide phenomenon.  It was neat to hear legends in animation talk about their art form to those who want to be in their shoes someday.  As a fan of animation, I look forward to seeing the next generations work. Some fun facts from the discussion that you may or may not know:

John Musker and Ron Clements were not originally supposed to write The Little Mermaid, but convinced their bosses to let them try.

According to the panel, the most common mistake new animators make is falling in love with their work too much, should start loose.

When putting together a portfolio many artists ut their best work in the back, but many times the reviewer won’t make it that far as they have many portfolios to review.  Start with your best stuff.

Walt Disney Animation Studios are still doing 2D animation on special projects, but no 2D features are currently in the pipeline.  However, there are still 2D artists that are a part of the studio.

Peter Docter’s films when he was at CalArts were a minute long, but they were great.

Frank and Ollie’s families gave permission to reprint the 12 basic principles of animation in the Disney Animated app and those principles work in 2d, CGI, and stop motion animation.

You can watch the entire Google Hangout on YouTube.  The Disney Animated iPad app is available in the App Store.