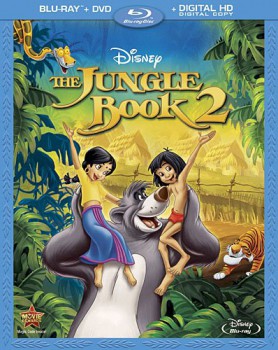 In the tradition of re-releasing sequels that were made in the 1990’s and early 2000’s shortly after Diamond Editions, Disney is returning The Jungle Book 2 from the vault on March 18th, 2014 on Blu-Ray and DVD (it was released digitally with the Diamond Edition on February 11th). Families who are unaware of this retread may be encouraged to blind-buy it when their children recognize the characters in a store. For Disney fans that enjoy this film, Disney offers little reason to purchase it again other than the marginally better looking HD transfer. It is available in a Blu-Ray/DVD/Digital Copy combo pack as well as a single-disc DVD.

DisneyToon Studios currently has some bragging rights. John Lasseter gave the crew a fantastic plug at 2013’s D23 Expo and the quality of their recent films (Secret of the Wings and Planes) are on par with where Walt Disney Animation Studios was before their recent return to glory. The studio started life as Disney Movietoons and existed as the theatrical arm of Walt Disney Television Animation, creating Ducktales: Treasure of the Lost Lamp and arguably their best film, A Goofy Movie. In 1994, Eisner’s team decided to test the waters by producing a sequel to Aladdin on a television budget. Return of Jafar flew off VHS shelves so fast that the studio quickly became a machine, churning out many sequels (known amongst fans as “cheapquels”) each year. With the success of the direct-to-video Winnie the Pooh films, Disney Toon Studios returned to theaters in 2000 with The Tigger Movie. The success of that film lead to two more theatrical Pooh films, as well as a sequel to Peter Pan called Return to Neverland in 2002 and this release, The Jungle Book 2 in 2003. By this time, Disney Toon Studios had become an unstoppable machine that while profitable, would have an overall negative impact on the company. The brand was cheapened and the Disney name in front of a product carried less weight. But that didn’t stop this $20 million production from bringing in over $40 million domestically and $135 million at the worldwide box office, not including home video sales.

At the end of The Jungle Book, Mowgli was encouraged to return to the man village with love in his eyes by a nameless pretty girl gathering water for her family. It turns out the girls name is Shanti, she has a brother named Ranjan, and her parents took Mowgli in as a member of their family. Five days later, Mowgli doesn’t feel like he fully belongs there and is homesick for the jungle. Meanwhile, Baloo misses his little buddy, so he decides to pay him a visit one night. When Mowgli follows Baloo back into the jungle, Shanti and Ranjan chase after him and end up in the same dangers Mowgli faced when he lived there. When Shere Khan learns of Mowgli’s return to the jungle, he can’t help but try to seek vengeance on the man cub that humiliated him.

The original film used a star-studded voice cast. While attempting to find actors that sound like the original voices, Disney also made sure they got names for the characters. John Goodman gives his best Phil Harris impression as Baloo (sounding much more like Pacha from The Emperor’s New Groove). Child star Haley Joel Osment plays Mowgli with more enthusiasm than the original character had. The current voice of Winnie the Pooh, Jim Cummings, is appropriately cast as Kaa. To play the new cast of characters, Mae Whitman (voice of Tinker Bell) was cast as Shanti, Jon Rhys-Davies plays her father, and Phil Collins plays Lucky the vulture.

In many ways, The Jungle Book 2 seeks to undo the resolution of The Jungle Book. At its core, the original is a film about a father figure (Baloo) doing what is right by a child that looks up to him (Mowgli). The end of the film suggests that Baloo and Mowgli will never meet again and that this is for the best. It’s part of what makes the film so memorable and touching. To see Baloo return to the same character audiences met in the beginning of The Jungle Book seems like a poor creative decision. The character’s journey then repeats itself until Baloo is in the same place, feeling that it’s best for Mowgli to return. It’s a sequel for the sake of a sequel. One of the film’s few strengths is a song called “Jungle Rhythm,” the only new tune that is memorable. The irony is that the film contains three reprises of “The Bare Necessities” (plus a reprise of “Colonel Hathi’s March” and a Smash Mouth cover of “I Wanna Be Like You” during the end credits) to make the soundtrack livelier.

The 1.66:1 widescreen presentation is taken directly from its digital source, offering the cleanest transfer possible. The Blu-Ray allows for more detail and colors pop better than in standard definition. The film still looks great on DVD and the transfer here is identical to the two previous releases.

Both discs offer 5.1 surround sound options in English, French, and Spanish. The Blu-Ray boasts a DTS HD surround mix as well. The surround mix is well done, making full use of base when elephants are marching. Dialogue and sound effects transfer to rear speakers when characters are off screen.

Disney has recycled some of the bonus features from the two previous DVD releases here, while leaving off others. All bonus features are in standard definition. Here is what’s included:

–       Synopsis of the Original movie – A 3-minute narration of The Jungle Book presented with fullscreen footage of the 1997 30th anniversary restoration. This feature was created for the original DVD release when The Jungle Book was in the “vault.” It feels useless now on this release tied so closely to the Diamond Edition.

–       Deleted Scenes – Two deleted songs are offered with introductions from Sharron Morrill and Matt Walker called “I Got You Beat” and “Braver.” Both are presented using demo audio and storyboards.

–       Sing-Along with the Movie – This feature starts the movie and adds basic subtitles to the songs while watching the film (no bouncing ball to guide you).

–       Music Videos – “W.I.L.D.” is a standard definition short version of the song as it appears in the film. “Jungle Rhythm” is not much more, with some minor editing with other clips from the film. No voice actors are shown recording the song, just animated clips, making both useless bonus features.

What’s missing? Not much, but a music video of “I Wanna Be Like You” performed by Smash Mouth is absent, probably due to a copyright issue. The original 2003 DVD also had a game called Mowgli’s Jungle Ruins Maze. 2008’s re-release added another game, Mowgli’s Story Time Adventure. While the games are likely left off due to the technology jump, they are absent from the DVD as well, which includes identical bonus features.

The Blu-Ray combo pack is housed in a Blu-Ray case with the blue disc on the right, grey DVD disc on the left. Inserts include a Disney Movie Rewards code and an ad to join the Disney Movie Club. The menu is based on the shadow puppet opening of the film. On the Blu-Ray disc, the options don’t highlight making it hard to tell what will occur when the user presses ‘enter’. The DVD uses the same home menu, but adds a leaf next to the item you have selected to clear up confusion. Trailers on both discs are for Sleeping Beauty Diamond Edition, Muppets: Most Wanted, and Frozen (on Blu-Ray, DVD, and HD Digital).

The included digital copy is downloadable from your choice of iTunes, Amazon, Vudu, or Google Play. Buyers have their choice of HD or standard definition on all platforms, but only the iTunes copy comes with bonus features. It is accompanied by the same menu and features offered on the Blu-Ray disc.

The Jungle Book 2 is an unnecessary retread that is easily forgotten. While The Jungle Book has many adult fans who still find it charming and accessible, the sequel feels dumbed down to appeal mostly to kids. The HD transfer is a marginal improvement for those looking to upgrade from DVD to Blu-Ray and/or digital, but expectations should end there.  Alex is currently watching and reviewing all of Disney’s films in chronological order. You can follow along here.