The Pirate Fairy at the El Capitan Theatre 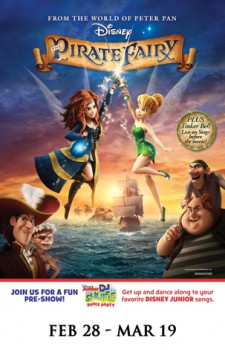 As it has with previous installments, El Capitan recently hosted an exclusive run of the new Tinker Bell film, “The Pirate Fairy”.

Like with many El Capitan screenings, the movie going experience includes a live preshow.  In this case, that included a Disney Junior DJ Shuffle Dance Party, featuring songs from “Doc McStuffins”, “Sophia the First” and “Jake and the Neverland Pirates”.  The audience was also taught a new dance called The DJ Shuffle.

Following a few previews (“Planes: Fire and Rescue”, “Bears” and “Muppets Most Wanted”), Tinker Bell herself briefly took the stage.  Perhaps the most amazing part was that I didn’t even notice that I had been shrunken to fairy size!

“The Pirate Fairy” tells the story of Zarina (Christina Hendricks), a dust-keeper fairy with a deep curiosity about the very pixie dust she works with.  After a dust-related accident gets her into trouble, she disappears from Pixie Hollow.  A year later, she returns but not as the same fairy she was.  Instead, she unleashes a plan that (literally) brings Pixie Hollow to a standstill and steals their Pixie Dust supply.  It then falls to Tinker Bell (Mae Whitman) and her fairy friends to retrieve the dust, which they soon discover is in the hands of a dangerous band of pirates ‚— including a familiar looking bloke named James (Tom Hiddleston).  Further complicating the fairies quest, Zarina showered them with her dust concoctions which swapped their various talents.  Will our favorite fairies be able to foil their former friend’s plan and save Pixie Hollow?

I knew I would enjoy the film from the familiar first few notes of the score.  The movie holds lots of fun surprises for Peter Pan fans like myself.  Even if you haven’t seen any of the other Tinker Bell films (I’ve only seen the first), you should be able to follow this film just fine.

If, after seeing “The Pirate Fairy” at El Capitan, you wanted to go back and watch the other films in the series, the Ghirardelli Soda Fountain next door has all the titles on hand as part of the Disney Studio Store.

“The Pirate Fairy” will play exclusively at the El Capitan Theatre in Hollywood through March 19, and will be released on Disney Blu-Ray and digital April 1st.