Movie Week: The State of Lucasfilm

In 2006 Disney purchased Pixar for 7.4 billion. In 2009 Disney bought Marvel for 4.6 billion. And Late in 2012 The Walt Disney Company threw down 4.5 billion in stock and cash to acquire Lucasfilm. Pixar and Marvel have both proven to be very lucrative investments so far. But what about Lucasfilm? Well in the year and a half since its purchase, Disney really hasn’t seen much of a return on it’s investment. But that’s nothing to panic about. It’ll be at least December of 2015 before any real money starts flowing in. And what happens in December of 2015 you ask? Well, that’s the date Star Wars – Episode VII hits theaters. December 18, 2015 to be exact. But what has the Walt Disney Company been doing with Lucasfilm for the last year and a half? Lets just say that they’ve been “getting their ducks in a row.” 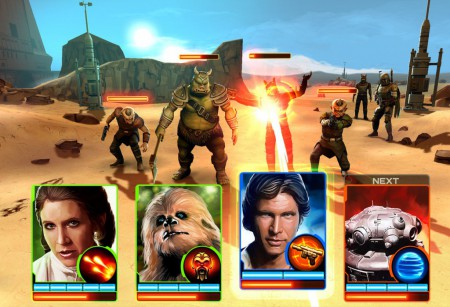 Right out of the gate Disney, I’ll be referring to Lucasfilm as “Disney” from this point forward because, let’s face it, Disney’s calling the shots here. Right out of the gate Disney cancelled the very popular Clone Wars animated series, and postponed Seth Greens animated Star Wars comedy series “Detours”. A statement was issued that they had “Reconsidered weather launching an animated comedy prior to the launch of Episode VII makes sense.” As it seemed that quite a bit of work had all ready been completed on Seth’s series, hopefully we’ll see it’s release in some form down the road. Several months later, Disney announced that Star Wars Rebels would be the new animated series on the block. While Clone Wars had been, and Detours probably would have been aired on Cartoon Network, Star Wars Rebels will air in 2014 on Disney XD. 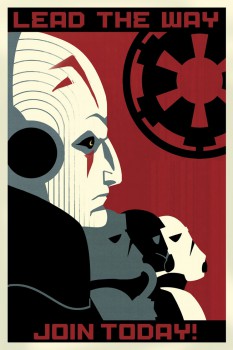 Next was the closure of Lucas Arts. Disney released the following statement: “After evaluating our position in the games market, we’ve decided to shift LucasArts from an internal development to a licensing model, minimizing the company’s risk while achieving a broader portfolio of quality Star Wars games. As a result of this change, we’ve had layoffs across the organization. We are incredibly appreciative and proud of the talented teams who have been developing our new titles.” Honestly, Lucas Arts closing doesn’t really hurt my feelings. When you look at the companies roster of games past and present, they’re more miss than hit. Sure they did release some great Star Wars games like X-Wing, the Super Star Wars series, Knights of the Old Republic, Battlefront, Rogue Squadron, and a hand full of others. But let’s face it, when gamers talk about Lucas Arts, it’s their non Star Wars games like Grim Fandango and The Secret of Monkey Island that always get first mention. Sadly, the closure of Lucas Arts meant that the highly anticipated game “Star Wars 1313” got the axe as well. So does this mean that we’ll never see another Star Wars game…good or bad? No, it just means that other companies will be developing and releasing the titles. From a financial standpoint this makes perfect sense. Instead of footing the bill themselves, Disney simply gets paid for the use of the Star Wars name, and then upon a games release, waits for their cut of the profits. The first of the “Post Lucas Arts” games was grabbed by game developer EA, and will be a new Star Wars Battlefront game. And while not currently happening, Star Wars 1313 could be picked up by an outside developer, and they’d just have to pick up where Lucas Arts left off. 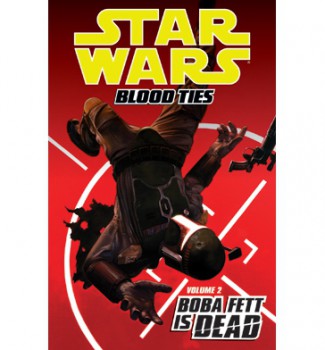 Right off the bat in 2014, Disney announced that Dark Horse Comics would be losing its 20 year old Star Wars license to Marvel Comics in 2015. Raise your hand if you didn’t see that one coming. Interestingly enough, Marvel Comics held the Star Wars license originally, publishing 107 Star Wars comics from 1977 to 1986. Dark Horse grabbed the license in 1991, and had held it since. In a statement issued by Lucasfilm: “Dark Horse Comics published exceptional Star Wars comics for over 20 years, and we will always be grateful for their enormous contributions to the mythos, and the terrific partnership that we had. In 2015, the cosmic adventures of Luke, Han, Leia and Chewbacca will make the lightspeed jump back to Marvel, to begin a new age of adventures within the Star Wars universe.”

All of this of course leads up to the Star Wars Expanded Universe. And what exactly IS the Expanded Universe you ask? The short answer is that the Star Wars films Episodes I thru VI are the “Star Wars Universe”. Novels, video games, animated content, comics, and anything outside of the films proper are part of the “Star Wars Expanded Universe”. Up until now however the events and characters introduced all the way across the board have been considered to be canon. There are even timelines that illustrate how everything fits into place, and it’s all part of the Star Wars Canon. Well, thats about to change. It was recently announced that “Star Wars Canon is now determined by the Lucasfilm Story Group.” The group will weed through the extremely bloated contents of the Expanded Universe and decide what is to be included in the official timeline and what will get dumped. If it’s included…it happened, if it’s not included, it’s not part of the canon…period. The Expanded Universe as it stands now includes some great characters like Grand Admiral Thrawn and Mara Jade introduced by author Timothy Zahn in a three novel series taking place after Return of the Jedi. There are also major events like Chewbacca’s death in Vector Prime, a novel written by R. A. Salvatore. Of course it needs to be said that all of the well written, well produced content, floats in a sea of garbage. And it’s time to take out the trash! The best thing for Disney to do is lock down everything they want to keep as part of the official timeline, and dump the rest. It’ll all still be out there…it just wont be a part of the “real” story. This move will greatly simplify things for Lucasfilm and Disney as they produce their post Return of the Jedi films. 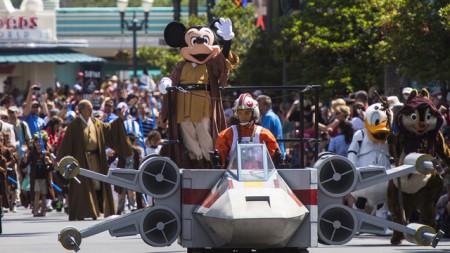 For a while things looked very positive for more Star Wars making it’s way into the Disney Parks. However, Florida’s NextGen program which includes the MagicBands and Fastpass Plus is over schedule and WAY over budget. Money earmarked for Star Wars has been shifted over to Florida to fix everything that’s wrong with the NextGen program, and that may include stealing funds from other projects well into 2015. This doesn’t mean we’ll never get anything, just that it’s been pushed back a bit until money frees up. So what’s on deck? Well Disneyland is supposed to get a Millennium Falcon walkthrough on top of the old PeopleMover platform, and that means all of the old PeopleMover track will finally be removed, putting the last nail in the coffin for ever getting anything back on that track. The Astro Orbiter will make the move up onto the Space Mountain Concourse, the Tomorrowland Terrace will be transformed into a Star Wars themed cantina, and the Autopia will drive off into the sunset and be replaced with a Speederbike run through and around the Ewok Village. Projects continue to develop, but we won’t see a thing until the Florida park works out all the NextGen bugs. Speaking of Florida, they made the decision to end the wildly popular Hyperspace Hoopla and it’s Dance off with the Star Wars Stars in place of fireworks. Add that to the list of “Probably bad ideas that Florida park management has made.” Adventurers Club anyone?

And so, where do we stand with Star Wars – Episode VII? Well, very little confirmed news, and a LOT of rumors. So let’s cover what we know for sure. The film is set to release on December 18, 2015. The final script is being written by the films director J.J. Abrams, and Lawrence Kasden. Kasden penned the Empire Strikes Back and Return of the Jedi, so story wise, I think things are in good hands. They will start filming at London’s Pinewood Studios this May, and John Williams will be back to score the film. The film will be set about 30 years after Return of the Jedi, and will star a trio of new characters along with who they’re simply referring to as “some very familiar faces.” And finally, along with the new trilogy of films, we’ll also be getting a few spinoff movies. And that’s about it as far as officially released info goes. Now let’s talk about the rumors. First those spinoff films are confirmed, but they’ve yet to say which characters they will be spotlighting. Boba Fett is the most likely contender, along with Yoda, Han Solo, and Jabba the Hutt. Please keep in mind that everything I’m about to talk about are still rumors, persistent very plausible rumors…but rumors just the same. That said, let’s dive in. Mark Hamill, Carrie Fisher, Harrison Ford and Ian McDiarmid will be returning to the franchise. On that note, there’s supposed to be a full sized Millennium Falcon being built on a soundstage. If this is true, you can almost be assured that, at the least, Han and Chewie will be back. Gary Oldman, Michael Fassbender, and Hugo Weaving are being considered for roles. Adam Driver from Girls has also been approached to play a villain. Incidentally, Adam Driver turned down the role of Nightwing in the Superman/Batman film, presumably for Star Wars. Jesse Plemons from Breaking Bad, and Downton Abbey’s Ed Speleers along with several others are trying for the role of Luke’s Jedi Padawan (Jedi in training). And finally, Oscar winner Lupita Nyong’o recently met with Abrams about a roll. As they will begin filming within the next 2 months, I’m sure it won’t be much longer before we get a confirmed casting list. Aside from the cast however, I hope Disney stays tightlipped. With the Expanded Universe being reigned in, the period that the upcoming Star Wars films will occupy is totally new territory, and I’d love to stay as in the dark as possible. I can’t express how much I’m looking forward to these films, and to say that I don’t want to know everything there is to know before I even step into the theatre, is putting it lightly.
Until next time kids…May the Force be with you!

Patrick Hurd is a lifelong Star Wars fan.  He collects the toys, he owns every incarnation of the films from the untouched originals on VHS to the new Bluray releases, he loves the music, he reads the books, he goes to conventions to meet the actors, and for over a decade he’s been a member of Jedi OKC, a Star Wars collectors and costuming group.  Jedi OKC uses Star Wars to reach out to the community, raising money for the Integris Childrens Hospital and the MDA.