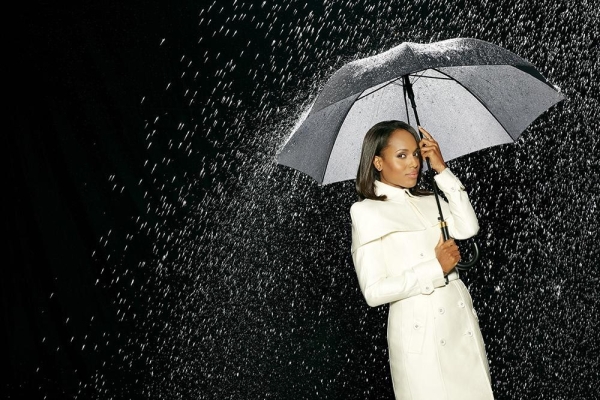 Here are some words that went through my head during the Season 3 finale of Scandal: @^#%, !^#^, and *&#? This finale was stunningly edited, amazingly acted and a fantastic (but stressful as hell) way to end the season. WARNING: THERE BE SPOILERS AHEAD! There’s ya warnin’…LET’S BREAK THIS PUPPY DOWN!

Our biggest concern going into this episode was the bomb that Maya placed in the church where the memorial service was being held for a politician…one that was attended by Sally Langston and Fitz’s new VP candidate (and Mellie’s love buddy). Cyrus knew about the bomb, but went all Elsa on the White House and tried to Let It Go, but alas, Jake Ballard to the rescue as he found the bomb and let Fitz know immediately (and gave some MAJOR side eye to Cyrus).

Sally vacated the church before the bomb went off, but her chief of staff has some control and power issues (like, MAJOR!), so he ripped her sleeve (which seemed like an expensive blazer, so, rude), put some dirt on her face and went all Gypsy on her butt and made her help the wounded. Then, one by one, the television station switched from the President’s speech to Sally’s humanitarian (more like fauxmanitarian) efforts and with that, Fitz has pretty much lost the election.

Olivia is devasted, Cyrus is devastated, and everyone in the White House is devastated. I feel like I saw a glimmer in Cyrus’ eye that was like “Defiance?!” but that sure as hell didn’t happen. While this is going down, Harrison is held at gunpoint after learned all of Maya’s secrets…but gets back to OPA not hurt, yet doesn’t reveal any secrets about the Fitz kill plan.

Olivia requests that Fitz write a “Vote for Sally” speech so his loss isn’t as bad, but Fitz, once again, brings up Vermont and the kids and the jams and Olivia gets “Fitz face.” She keeps telling him that he can’t leave Mellie, then spills about the whole “Your father raped your wife and your son may or may not be your brother kthanksbyeeee!” At this point in the show, I was all “OLIVINOOOOOO!” Fitz immediately rushes to the now always drunk (allegedly) Mellie and consoles her. Mellie’s face was priceless at the beginning, as she was just so confused about the affection she was getting from her “husband.” That husband is in air quotes since…are we for sure that they love each other, ‘cause I need more proof.

Quinn’s B613 boy-toy gives Quinn a key piece of info that Huck (her fishnet pulling, awkward French kissing, “boyfriend”) apparently would “love to see.” So, when Quinn brings Huck to his family (you know…the lady from the subway during his hobo phase?), he freaks out, pushes and yells at Quinn, and officially ends social media users’ hopes of further fun from #HuckleberryQuinn. (Side note: Abby gave us the best line of the night with “OH DEAR GOD MY EYES!”)

Oh, Daddy Pope is feeling better and his relationship with Olivia seems to be at an all-time high. Remember this sentence…

Olivia and Fitz share an emotional phone call right before he goes on stage with his entire family (the kids ARE all right) to announce that he will bow out of the Presidential race. Maya is in Olivia’s husband’s hospital room, saying things like “It’s for the best” and “I’m to help you” to Olivia, among other things villains say. Then Fitz’s son sneezes blood. Then his eyes roll in the back of his head. Then he has a seizure at the hospital. Then he dies (the kids ARE NOT all right).

The first thing Olivia thought was “Fitz is going to win the election,” and I would put money down that the first thing Sally thought was a pretty 4-letter word. Cyrus reveals to Olivia that he almost allowed hundreds to blow into smithereens. Both are depressed with their life. I would be too. A KID DIED! A KID WHO HAD AN ANTI-FITZ TWITTER DIED!

We then find out that he died of a bacterial disease…that is locked up in a secure location and a vial of it went missing the previous week. So, his son was murdered. And it was Maya. Papa Pope promises Fitz he will take her down and Olivia breaks down when she is told her mother did the dirty deed. In the words of a book I read in the 10th grade…Things Fall Apart.

Now, crazy plot points begin to go by faster than a Kardashian trying to clear up a quote that came off mildly offensive. Olivia calls her father and asks if the season premiere promise from her father (new identity, plane to get away, 100,000 frequent flyer miles and a continental breakfast) is still valid. Maya is captured with a briefcase filled with cash. Huck confronts his family. Harrison heads to OPA to deliver the good news but, loljk Olivia Pope quit. Yes, you read that correctly…Olivia. Pope. Quit. That’s like one day walking outside and the sky is chartreuse. Like, nah, Olivia can’t do that. She’s Olivia Pope. SHE NEEDS TO SHUT THINGS DOWN! Then Harrison goes back to Papa Pope to confront him on his lies and OMG Papa Pope actually killed the kid OMG he’s the head of B613 OMG he has Maya in the hole OMG he wants Olivia gone.

Then, Olivia flies away while getting a call from the White House, as Fitz is in the midst of a life crisis, and she ignores it. IGNORES IT! Who does she think she is, Sally after losing the Presidency? (BURRRRRNNNNN!) Yet, her face quickly switches from happiness to depression. THAT’s the Olivia Pope I like to see.

This was a crazy spectacular Scandal Finale that has me stoked for next season, though Black Box can help me through these tough next couple of months. If you weren’t on Twitter for the finale, get on it for the premiere. It is the most fun you will ever have with complete strangers.

Let me know your thoughts on this crazy finale and this season as a whole in the comments below or on the discussion boards.

(Overall side note: If this show doesn’t get a lot of Emmy nominations, I’ll be livid. Bellamy Young is constantly killing it and deserves a nod, along with Dan Bucatinsky, again, for his death episode and Kerry Washington, for obvious reasons. I would LOVE to see this pull out a Best Drama nomination too, but I’m not sure. Let’s hope so!)