If you’re reading this website, than you can easily name ten films made by Walt Disney Animation Studios (WDAS)… and… GO!

6.) Snow White and the Seven Dwarfs

Okay take a deep breath, you’ve proved your level of fandom. Did you know that Disney/Hyperion Books has formed a close partnership with WDAS? I didn’t, but once I did I was very eager to learn more. Walt Disney Animation Studio Artist Showcase is a series of childrens books illustrated by studio artists.

The first artist highlighted is Lorelay Bove, who has illustrated several books for Disney and is a visual development artist at the studio. She had a concept for a story about children teaching their father some manners and partnered with writer Kara LaReau (no affiliation to WDAS) to create this book. 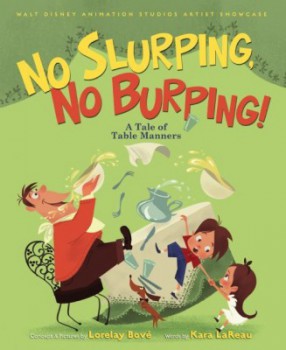 No Slurping, No Burping! is the first in the Walt Disney Animation Studio Artist Showcase series. It tells the story of two children, Evie and Simon, and their polite dog who live with their sloppy father. It’s up to the children to teach dad proper manners over the course of a week before a surprise visitor arrives.

This type of educational childrens book is typically told with adults teaching the kids. The clever twist here is that the kids know everything about manners and their father is the ignorant party. The illustrations are charming and fun and in the Disney style that appeals to all of our sensibilities. Obviously the core audience is children, but the parents who are lucky enough to read this story to them will enjoy the cleverly crafted story and maybe even get choked up by the ending.

As an extreme Disney fan, I have a bazaar book collection that this will fit into nicely. I’m actually eager to see what comes next from the series. Hopefully the second installment will come along sooner than later (as of now, I couldn’t find another title when searching a year out on amazon.com).

Speaking of amazon, No Slurping, No Burping! is currently available from the world’s largest online retailer.