** For full disclosure I am a self professed comic book geek, so this is a look at the film from my eyes and I will try and keep this as spoiler free as possible, but can’t promise a few small ones won’t pop up** 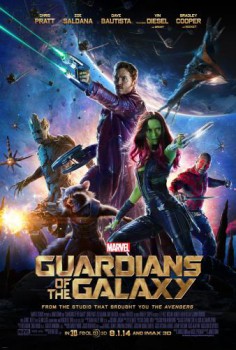 About every month or so the Disney Parks Blog offers some type of chance for a special meet-up or give away but this one was pretty amazing, a chance to see Marvel’s Guardians of the Galaxy a week early! On Sunday July 27th myself along with a VERY FULL theater of Parks Blog readers were treated to 2 hours of action and laughs!

For those of you that don’t know the story of the Guardians of the Galaxy, that is fine. Just as all the other films in the Marvel Cinematic Universe (MCU), it is written for the public not people like me, not to say the die hard comic book nerd won’t love it…cause I did! But as my friend Scarlett, who hadn’t even seen the trailer for the film, summed up in this tweet

Rag tag band of misfits save the galaxy w/ a leader in an awesome jacket & a killer soundtrack. Guardians of the Galaxy is just Captian EO.

I am paraphrasing her thoughts here but I feel like she is saying “it’s fun just like a 17 minute 3D epic from the 80’s well worth the time to see it and will be great even 20 years later!”

The film spends the first 20 minutes or so setting up Peter Quill aka Star-Lords origin and him acquiring the orb, which is the catalyst that brings all the Guardians together. 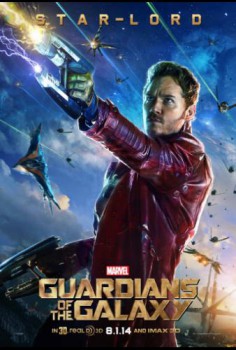 After meeting Star-Lord we move on to the big bads of the film – Ronan, a genocidal Kree with a major chip on his shoulder, and his loaned out help, Nebula and Gamora two of the “daughters of Thanos” who are all after the orb for different reasons.

As the plot thickens so does our team, adding Groot and Rocket (the Anna and Elsa of the Marvel Universe from a merch stand point I feel) bounty hunters after a big pay day on Star Lords head, Drax the Destroyer a man hell bent on killing Ronan for the death of his family, and the Nova Corps the “space police”. 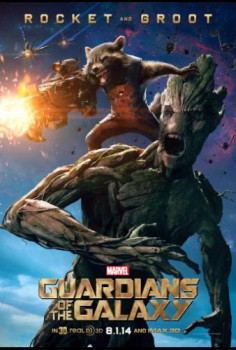 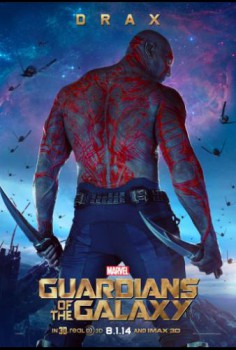 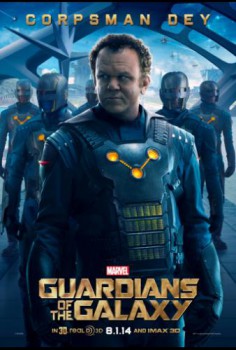 Now that all the main players are in place we can talk about the movie!

Guardians of the Galaxy is the biggest chance Marvel has taken since the first Iron Man film came out. No one except fanboys (like me) have any clue who these characters are or why they should care, but you will! Over the 2 hours and 2 minutes of the film you watch this “rag-tag band of misfits” come together and go on to save the galaxy while laughing the entire way! The movie itself was by far the funniest of all the MCU films to date, many times I missed lines due to the theater still laughing. The characters are written like people, not people in movies, but just like people you know which makes you care about them. The action is great,  you never have the feeling of it being drawn out due to cuts that feel perfect. The casting is amazing, from a walking tree voiced by Vin Diesel that only says “I Am Groot” to a former zombie killer in Michael Rooker who in his full blueness portrays Yondu the head of the Ravagers, everyone feels as perfect as Robert Downey, Jr. does as Iron Man!

This movie is part of the MCU but you won’t find any of the Avengers or Loki in it, the closest ties to any of the previous films are 2 characters that have appeared in previous Marvel films.

The first is the Collector (not a spoiler, he has his own poster) who appeared in the mid credit scene for Thor: The Dark World being handed the first of the Infinity Stones…I wonder if that is a plot point for something bigger… 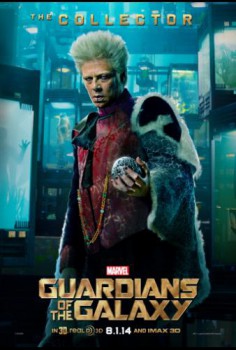 Speaking of BIGGER, the second character with ties to the greater MCU would be none other then the “father” of two of the deadliest women to grace the Silver Screen Thanos! Thanos for those of you who didn’t scream like a little girl at the post-credit scene of The Avengers (yeah I will admit to that) has been being set up as the BIG big bad for the MCU leading up to Avengers 3 in a few years. His story is coming together very slowly but anyone that has ever picked up any comic with the words “Infinity Gauntlet” in the title can guess where it is all headed.

Two of the biggest stand out things in this film are, of course, the soundtrack and the heart! 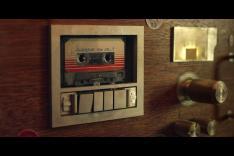 The soundtrack which is a Awesome Mix-Tape of the 70’s could be consider the 6 member of the Guardians of the Galaxy, due to how much it is featured, just makes you feel good and thanks to Star Lord

The heart of the film really comes from you caring about the characters as people(?), in the Avengers the stand out moment is when Agent Coulson is killed by Loki (if that is a spoiler you should have stopped reading a long time ago) but in GotG you feel that tug on your heart from the first few minutes right up to one of the credit scenes.

Guardians of the Galaxy stands out as one of my favorite of MCU films with Groot and Rocket just stealing the show! I will be seeing it at least 2 more times without hesitation! If you are a fan of the MCU you will enjoy this film and be excited for the sequel in 3 years, if you are not a fan or have never seen any of the other Marvel films this is a good place to jump on and get addicted! It fits perfectly into the bigger MCU without being tied to earth or a pre-existing Marvel character we know.

The film is PG-13 mostly due to curse words being used on a somewhat frequent basis in the film, but no stand out violence.