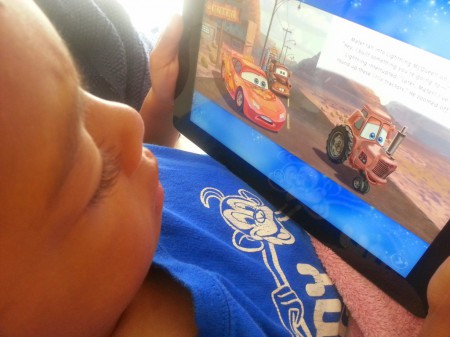 Disney has brought an old favorite form of entertainment into the modern age with the Disney Storybook App. Before the video cassette, DVD or Blu-ray we would relive the Disney fairy tales through read along stories. We began with books that had a record that would read the book to you and indicate it was time to the turn the page when the little chimes would ring. We treasured them playing them over and over. Eventually technology moved on to cassette tapes and so did our treasured stories now as books on tape. But as the CD became king of audio and the DVD grew in popularity for home entertainment children’s read-along books became more and more difficult to find. When I finally became a mom, the audio world had almost shifted entirely to MP3 and I was finding it challenging to pass along this love to my son. I’ve found a few titles here and there and have even considered purchasing old sets from eBay. We tried Disney’s website – DisneyStoryCentral.com but it isn’t easy to cuddle on the sofa and read together with a laptop.

Enter the new Disney Story Central App for iPad that Gideon and I were given the opportunity to sample. Over 100 Disney titles (stories about Mickey and friends, the Princesses, Pixar friends, etc. ) are available for purchase through the app. You can redeem four titles with the initial download and registration. And Disney says new titles will be coming monthly.

Growing up with Disney’s “See, Hear, Read” titles I hope that over the years we’ll see some of those classic titles brought over to the app as well but I know that often such things are never easy as they seem given the various entities who own the rights. My favorite story of all time continues to be “it’s a small world.” So I guess I shouldn’t be too surprised that Gideon’s first selection was Mater’s Junkyard Jamboree, also the name of his absolute favorite attraction right now. The read along story actually shares the backstory of this adorable attraction at Disney California Adventure – how Mater came to gather the little tractors. As the story is read each word is illuminated in red. We selected AutoPlay so the pages turn automatically. “Read to Me” that lets you turn the page yourself as the reader reaches the end of each page or you can choose to read completely on your own without a narrator.

Unlike Disney’s various Storybook app titles – like the recently released Planes, these are simply the book read to you. There are no mini games related to the story or clickable characters. They are the same titles you find on local shelves beautifully translated to the iPad and read to you with a bit of introductory music. While the readers of the titles we listened to do offer nice inflection I wish they had a bit more variety for each character within the story. However the standard delivery is very helpful to beginning readers. Along with Mater’s Junkyard Jamboree we sampled Minnie’s Rainbow, Huey, Dewey and Louie’s Rainy Day and Planes Fire & Rescue. Your library titles also sync with the website, DisneyStoryCentral.com.

The Disney Story Central app keeps a log of your reader’s progress. It can even keep the logs of various readers if your family has several children and lets them set up their own bookshelf of their favorite titles. Through the password protected zone, I can purchase a number of tokens that my little reader can then redeem for titles. Titles cost $3.99 when purchased individually but various bundles can reduce the cost to under $1 per title.

Continued reading is encouraged through a variety of digital medals and badges readers collect like the “Magical Beginnings” badge after you’ve read 5 Disney Junior books or the six-day streak award.

Like the Disney read-along books did for me years ago, The Disney Story Central app can help your child develop a growing love of reading with you or independently, and for that I highly recommend it.