Last Thursday, Club Penguin’s servers were full of jolly, partying penguins as Club Penguin Island was transformed into a “Frozen” playground during the most anxiously anticipated penguin party EVER!

My son, Dean (Dcookie888) logged on bright and early before school to check out the action.  Before 7:00 a.m., he had already completed the quest to find Elsa’s magic snowflakes, enabling him to morph into either Olaf or Marshmallow (the frozen snow monster).  Both are totes cool, but he chose Olaf and then waddled over to the Town Plaza where he and a crowd of excited penguins proceeded to hurl magic snowballs, freezing the buildings.  The whole island had slightly different graphics and the hit song, “Let it Go” was added to the song list available in the igloos.

Snowman Puffles were immediately all the rage, the equivalent of a fluffy poodle in Malibu draped over a socialite’s arm – but much, much cuter.  Members can adopt these happy little pets by clicking on the snowflake icon, but only after completing the snowflake quest.  The snowman puffles are free and seem to be limitless.  Last time I checked, Dcookie888 has about 10 of them scooting around his igloo’s backyard.

And what party is complete without swag?  Club Penguin didn’t skimp.  Members are being loaded up with goodies for their penguins during the quest in the form of sweaters, pool toys, a cool slouchy hat and even an ice-sled!  Of course, the icing on the cupcake has been the free ice palace igloo.  You know, I may be imagining it, but it seems that puffles are finding more treasure than ever at this time, adding to the coiffeurs.

Penguins had to patiently wait for Elsa to build her ice palace.  It was worth the wait, because when the palace opened a week after the party began, it was spectacular!  Members can watch Elsa (in her penguin form) conduct an instrumental version of “Let it Go” from a stage above the room.  In honor of the event, Dean (Dcookie888) donned his Olaf costume while my penguin wore a beautiful replica of Elsa’s ice princess gown.  We danced with plenty of festive mish-mashes of costumes (Sven’s reindeer ears with Olaf’s costume was a popular look among the well dressed party-goers). 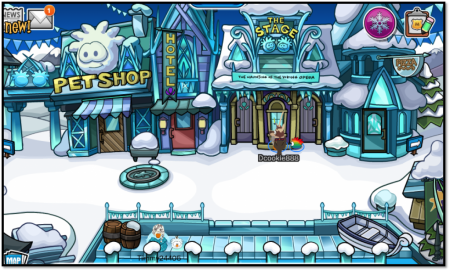 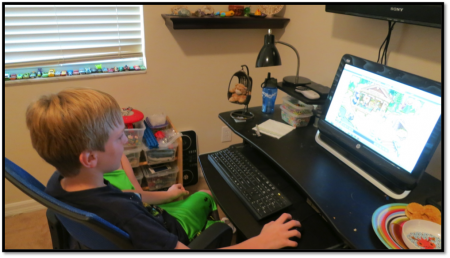 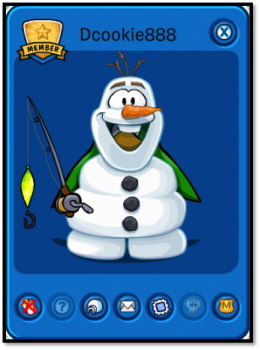 Dean’s new ice igloo is a comfortable home
that is all about his puffles! 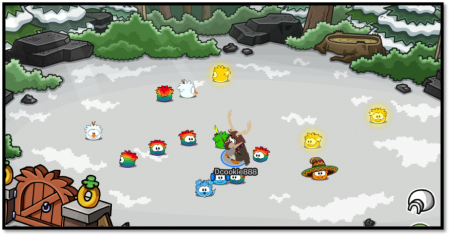 Puffles, hanging out in the “backyard”