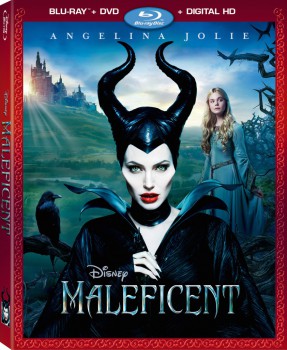 When Disney announced that they were making a movie about Maleficent, one of the greatest Disney villains of all time, their news was met with mixed reactions. In a world where Alice in Wonderland and Snow White and the Huntsman can be blockbusters, it seemed like a smart business move. But I don’t think anybody expected it to be the 2nd highest grossing film of 2014 at the worldwide box office, beating out competition from three Marvel films.

Marketing relied heavily on Angelina Jolie, which was brilliant casting. She has the ability to be cold, yet likeable, which is exactly what Maleficent needed in a film meant to humanize her. Special previews were set up at Disney California Adventure and Disney’s Hollywood Studios to convince Disney fans that they should take a trip to the theater. Buzz from these previews had a ripple effect on social media and helped Maleficent open in the #1 spot and continue casting its spell over the box office throughout the summer.

Maleficent tells the story of an orphaned fairy that misplaced her trust in a young man who stole her wings. When that man became king, she cursed his newborn child in an act of hateful revenge. But after years of watching the child grow in the woods, Maleficent realizes her curse was misplaced and seeks to set things right.

Arriving on three home video formats on November 4th, Disney’s Maleficent is sure to be a top seller this holiday season. The subject of this review is the Combo Pack, which comes with a Blu-Ray, DVD and Digital HD digital copy. A standalone DVD release is also available, in addition to digital purchase options from all major digital providers.

If it feels like something is missing, it’s because Maleficent was released to theaters in 3D. In a trend that started with Frozen last Spring, Disney has apparently given up on releasing films on 3D Blu-Ray (the only exception to the rule appears to be Marvel films). Literally every country outside of the U.S. and Canada has released the film in 3D. Disney has been silent on the issue, giving answers that beat around Maleficent’s thorny bush when fans ask if there will be a 3D release. At this time, it looks like there won’t be one for this or Frozen.

Maleficent is a feast for the eyes and the high definition transfer on Blu-Ray looks spectacular. The color palette is mostly soft with earth tones, but darker scenes feature lots of black, which is flawlessly depicted on this disc. And the occasional bright colors, mostly in the bioluminescent scenes in the Moors, really pop off the screen.

On DVD, Maleficent looks as good as it can. Compared to the Blu-Ray, it looses a lot of detail and edge definition. The dark color palette is less impressive and some quick panning shots look jerky compared to the blue disc. But the presentation will please anyone who still primarily uses DVDs (which is most people).

The film is presented on Blu-Ray in English 7.1 DTS-HD Master Audio. The film has an amazing score with choral orchestrations that fill the rear speakers. Big action scenes make excellent use of the subwoofer. Other audio options are a 2.0 descriptive audio track, and 5.1 French and Spanish tracks.

The same audio options are available on the DVD, with the exception of the 7.1 English track which has been replaced with a 5.1 Dolby Digital track.

For the highest grossing Disney branded film of 2014, they have assembled a whopping 32 minutes of bonus features. Most of them are informative and insightful, but the disc is lacking a clear narrative on the making of the film.

All of these bonus features are on the Blu-Ray disc and iTunes digital copy. The only bonus feature on the DVD is “Aurora: Becoming a Beauty.”

Maleficent is housed in a standard sized Blu-Ray case with disc holders on either side of the case for each disc. Inserts include a Disney Movie Rewards/Disney Movies Anywhere/Digital Copy code plus an ad for Disney Movie Club. The case is housed inside a foil embossed slipcover.

The digital copy can be redeemed through iTunes, Amazon Instant Video, Google Play, Target Ticket, and Vudu. Redeeming through iTunes also unlocks a streaming copy through Disney Movies Anywhere (although merely registering your code through your linked Disney Movie Rewards account unlocks this feature as well).

The Blu-Ray and DVD menu features Maleficent sitting in a tree looking over the kingdom as score from the film plays.

Maleficent twists the classic Sleeping Beauty tale to make the villain a heroine and is sure to please fans of Tim Burton’s Alice in Wonderland and Disney’s Oz, the Great and Powerful. The bonus features give a tease into what it was like to make the film, but will leave you wanting more. The film looks great on Blu-Ray, but the lack of a 3D release will disappoint fans that have a 3D TV and Disney’s silent message to them is as cold as an evil fairies’ curse.