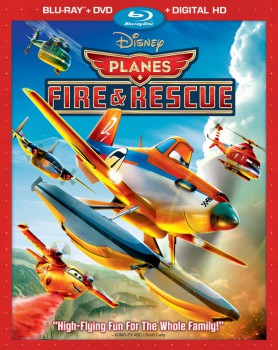 August 2013 saw the launch of a new series from Disney Toon Studios, Planes. Taking place “above the world of Cars,” this series was designed to appeal to kids who can’t get enough of Lightning McQueen and his friends. With Cars director John Lasseter overseeing all of the output from Disney Toon Studios, it should come as no surprise that the first film was better than expected.

That being said, Disney has made more money off of Cars merchandise than they have from the original film or its sequel. Toys and apparel have sold so strongly that it is Pixar’s most evergreen franchise, even above Toy Story. It’s proof that success of a film doesn’t always equal longevity of a franchise, as the Cars films fall into the bottom half of Pixar’s most successful films.

A sequel to Planes was announced before the film even hit theaters. Attendees of 2013’s D23 Expo got a glimpse at Planes: Fire & Rescue before they had an opportunity to see Planes and it was very clear that even if Planes bombed at the box office, they would make their money back through toy sales. I personally know several kids who love the toys and can name every plane from the film, yet they haven’t even seen the movie.

At first glance, Planes: Fire & Rescue looks like an opportunity to sell more toys. Dusty relocates to Piston Peak, which is full of brand new side characters. Dusty’s paint job even changes to red, meaning new Dusty toys can be sold. It’s hard to look at the film and not see all of the commercial opportunities that await Disney Consumer Products, a division that often has some creative control over character design in films specifically to make merchandise easier to sell.

However, if you ignore the obvious reasons why this film exists, you actually get a much stronger film than Planes. When Propwash Junction is cited for not having the legal requirements for fire safety, Dusty travels to Piston Peak to train to be a firefighter. But when a fire breaks out during the opening of a new resort, Dusty has to help save the day. The film also has an ironic subplot about the dangers of greedy corporate executives… why was this film made again?

The film is touchingly dedicated to firefighters everywhere. The characters are a little more one-dimensional than their Pixar land-loving cousins, but Planes: Fire & Rescue is actually a stronger film than Cars 2. It arrives on home video in a Blu-Ray/DVD/Digital combo pack, a standalone DVD and a digital only release through all major digital providers. Disney has no plans to release the 3D version on Blu-Ray in the U.S. and the only international country with a scheduled 3D release is Mexico.

As you would expect from a film made entirely in a computer, Planes: Fire & Rescue looks spectacular on Blu-Ray. This film has a softer color palette than the first one, but black levels and the occasional bright colors are presented well. Detail is crisp and I didn’t notice any flaws with the transfer.

The DVD offers less detail and the colors look a little subdued in comparison to the Blu-Ray, but it’s still a fine transfer. DVD fans will not be disappointed.

Planes: Fire & Rescue is presented on Blu-Ray in a 7.1 DTS-HD Master Audio track. The track is pretty impressive, placing off screen engine noises in the rear speakers. There are frequent times where you hear a plane before it is seen and the sound travels through the rear speakers to the front. Other audio options include 2.0 descriptive audio and 5.1 French and Spanish tracks.

The DVD features Dolby Digital 5.1 tracks in English, French and Spanish in addition to the 2.0 descriptive audio track.

Nearly 25 minutes of bonus features are presented, including a look at the real life firefighters that inspired the story and a hilarious new short.

All of these bonus features are on the Blu-Ray disc and iTunes Digital Copy. The only bonus features on the DVD are “Viataminamulch: Air Spectacular” and the music video.

Planes: Fire & Rescue is presented in a standard Blu-Ray case with disc holders on either side of the interior. The Blu-Ray disc is on the right side, the grey DVD on the left. Inserts include a custom Disney Movies Anywhere/Digital Copy/Disney Movie Rewards code (one code unlocks all three) and an ad for Disney Movie Club. The digital copy can be redeemed through iTunes, Amazon Instant Video, Target Ticket, Google Play and Vudu. Redeeming through iTunes (or simply registering your code with Disney Movie Rewards) unlocks a streaming copy through Disney Movies Anywhere.

The menu features postcards from Piston Peak with moving images inside that play clips from the film.

Planes: Fire & Rescue is a stronger film than the first. Disney has assembled a worthy assortment of bonus features, which includes shorts that are funnier than the film. Most of the purchases will no doubt be for kids who love the toys, but I encourage Disney fans to give the film a chance.