This month’s party mascot is once again [Pirate] Rockhopper!  While Pirate Rockhopper was out exploring, a group of crabs living on Swashbuckler Trading Post boarded Rockhopper’s ship, the Migrator (bloody stow-aways!). These mutinous buggers eventually took over, sailing Pirate Rockhopper’s beloved Migrator straight into the shores of Club Penguin where they crashed.  Club Penguin Times posted an article, pictured below, quoting a devastated Pirate Rockhopper as saying, “She be the greatest ship that ever be sailing the seven and a half seas”.

Penguins are pitching in to help Rockhopper, battling those pirate crabs (rock/paper/scissors style) and collecting their own loot.  Also, penguins can duel each another to collect “pirate party coins” that can be redeemed for different pirate swords. My son, DCookie888 loves the green glowing sword and the purple balloon sword, but there are more. He says that if you select the lowest lefthand icon during the duel, labeled “LOW” you will almost always win your duel on the second blow. This is the fourth pirate themed party Club Penguin has hosted. Club Penguin’s Pirate Party is running from November 20 through December 3rd.

Rockhopper needs our help to stop the pirate crabs who are hoarding the precious treasures that they stole from him. Penguins are battling crabs all over the island, winning their own loot along the way.  There are battles in the Dock area, Snow Forts, Plaza and even in Town Center.  It is chaos!  But don’t worry, DCookie888 is ON it. We are having a great time battling those pesky crabs. From the Club Penguin Times: DCookie888 is ON it.  Here he is wearing his newly collected Pirate Party garb, accompanied by a Ghost Puffle from last month’s Halloween party. 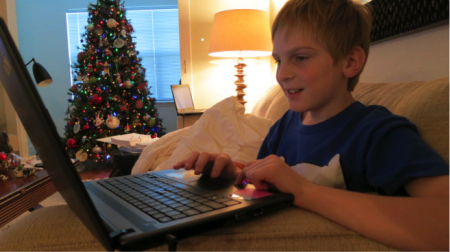 Below, claim yer sword and dual the crabs! 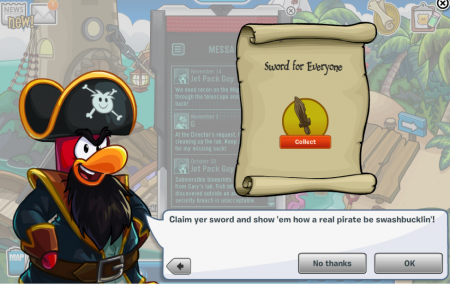 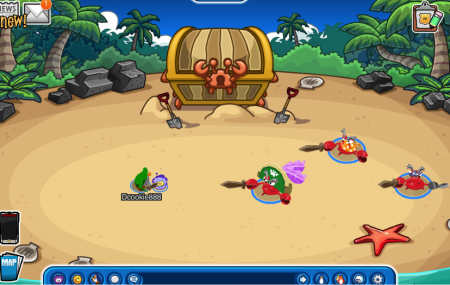 Around the island, there are plenty of awesome places to hang out – pirate themed of course. 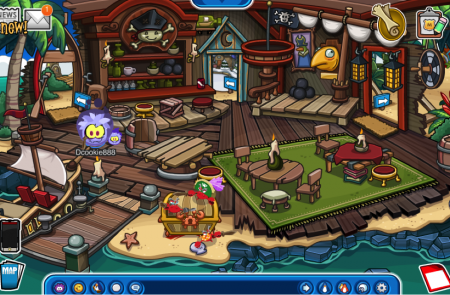 The Beach, below, is a mermaid’s lagoon: 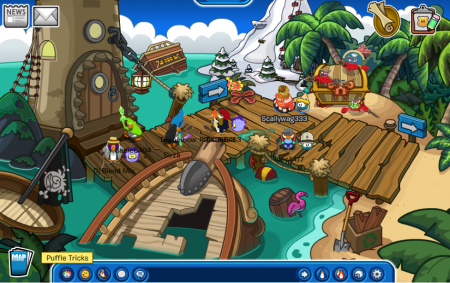 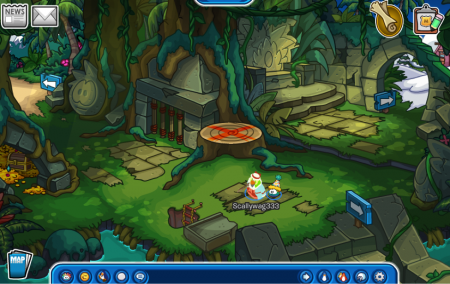 The Crab Treasure Hunt is a fun quest featuring “Rock-Paper-Scissors” type duels.  DCookie888 said that if you choose the bottom left icon during the duel (“LOW”), you will almost always win on the second strike. Try it! The catalogs feature some great loot, igloos, pirate fashions and igloo decor.  Check out the pictures, below.  This month, penguins can actually “build” a pirate ship in their igloos if they purchase the pirate ship pieces from the November Furniture Catalog. 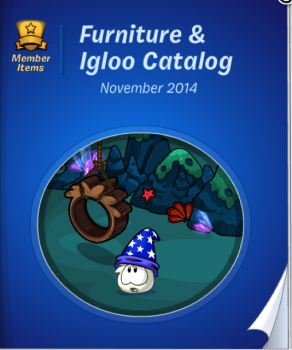 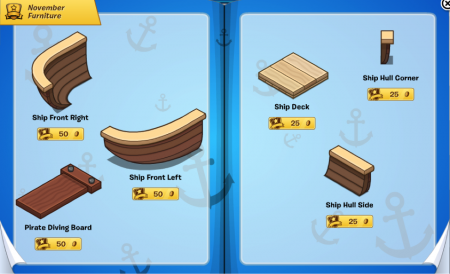