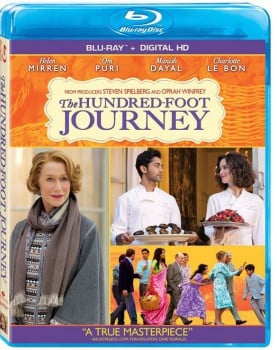 The Hundred-Foot Journey came out last August and had a recipe for success at the box office. DreamWorks Pictures has had hits (The Help, War Horse) and misses (People Like Us, The Fifth Estate), but came out strong this time. I saw it in theaters almost solely for Helen Mirren and fell in love with it.

Despite having top billing and the deceptive synopsis on the back of the box, Helen Mirren doesn’t play the main character. Hasam Kadam (Manish Dayal) loves cooking. His mom taught him how to prepare meals from the heart in their village restaurant in India. When his mom is killed during a political uprising, his dad (Om Puri) packs the family in a van and drives them around Europe in search of a new home. When their van breaks down in a small French town, they decide to stay there and open a new restaurant. The only problem is that it is 100 feet away from a well established restaurant with a Michelin Star (similar to a AAA Diamond). The owner of that restaurant (Helen Mirren) goes to great lengths to stomp out the competition, but when Hasam begins to fuse his Indian heritage with classic French cuisine, the competition really heats up.

The Hundred-Foot Journey is now available in a Blu-Ray/Digital HD combo pack, a standalone DVD, and digitally through all major providers. The combo pack is the subject of this review.

The cinematography in this film is amazing and it is expertly presented in HD on Blu-Ray. Colors are vivid and detail is clear. The locations drastically change several times throughout the film and each one looks amazing here. The film is presented in its theatrical aspect ratio of 2.39:1.

The main audio mix is English 5.1 DTS-HDMA. The vibrant soundtrack allows Indian-infused pop music and sound effects to fill the rear speakers while dialogue stays mostly in the front channels. Other audio options include English 2.0 Descriptive Audio, and French and Spanish 5.1 tracks.

The Hundred-Foot Journey is housed in a single-disc standard sized Blu-Ray case. The only insert is for the digital copy. There is no slipcover.

The digital copy can be redeemed through iTunes, Target Ticket, Google Play, Amazon Instant Video, and Vudu. The redemption site claims that you can redeem this title through Disney Movies Anywhere, but attempting to do so gives an error because Touchstone releases are not included on that site.  I redeemed my copy from iTunes where it came with all of the bonus features found on this disc.

The Hundred-Foot Journey is a heartwarmingly light comedy about food and how it can change your life. It is expertly presented on Blu-Ray and if you love movies like Julie & Julia or Chocolat, then it’s hard to go wrong with this film. Just be sure to have dinner ready while you watch it. You will go from full to starving by the end of the movie.