A Review of Four “Cinderella” Books

Walt Disney Pictures’ latest live action fairytale is a retelling of the evergreen classic Cinderella. The film is directed by Kenneth Branagh, stars Lily James, Cate Blanchett and Helena Bonham Carter, and has a screenplay by Chris Weitz. Audiences will have to wait until March 13th to see the latest film version of one of the sweetest stories ever told, but for the young and young at heart the wait can be over right now with four movie tie-in books published by Disney Press. All four books tell the same story in different ways.

The story starts with young Ella, who has a happy life with her adoring parents. When her mother gets deathly sick, she gives her daughter words to live by: “Have courage and be kind.” Years later, her father decides to remarry to bring some happiness back to the house, but after he passes away Ella’s mother’s words are put to the test. Can she be courageous in the face of the humility her step family force upon her? Can she be kind to them through it all?

Ella meets a stranger in the woods one day, a handsome man named Kit. Their chance encounter reveals how alike they are, but is quickly interrupted. Kit turns out to be the prince and he is being forced by his dying father to choose a bride. Desperately hoping to see the mystery girl again, he convinces his father to throw a ball and invite everyone in the kingdom, regardless of status. When she hears about the ball, Ella dreams of attending to find Kit. However, her stepmother Lady Tremaine has other plans for Cinderella.

Ella’s chances of attending the ball are destroyed by her stepmother and stepsisters, but she soon discovers that she has a Fairy Godmother who transforms her into a beautiful princess and whisks her away to the ball in a pumpkin coach. There, she discovers that Kit is really the prince and that he is just as much a prisoner as she is, just in different ways. She runs away at midnight just before the spell breaks without giving him her name. Now the prince must have the courage to follow his heart to find Ella so they can both live happily every after. 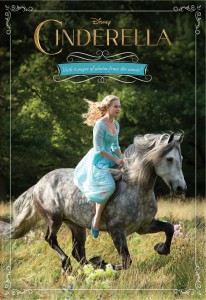 The junior novelization of Cinderella is aimed at ages 8 to 12 and tells the story in 165 pages. The author is anonymous on the cover and the story is told by the Fairy Godmother, who routinely interjects her own comments as the story unfolds. However, the real author is Elizabeth Rudnick, who writes junior novelizations for many Disney films (she most recently did Maleficent).

This softcover book features 8 pages of color photos from the film. I remember reading junior novelizations of almost every movie I was excited for as a kid and reading this one brought back that nostalgic feeling. The age recommendation feels right for this book.

Have Courage, Be Kind: The Tale of Cinderella 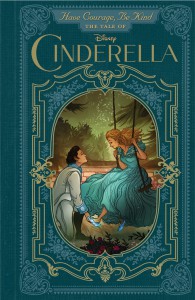 This hardcover book has a satin finish and gold leaf inlay, making it the most visually appealing of the four Cinderella books. They say you should never judge a book by its cover, but this one clearly looks the best of the four. At 277 pages and targeted at the same age demographic (8 to 12), this version is illustrated and is written by Brittany Candau (another frequent Disney writer). All of the illustrations are by Cory Godbey, who is uncredited here but credited on the picture book that reuses some of these images.

I preferred this version to the Junior Novelization because it takes its time telling the story. In comparison, the junior novelization feels a little rushed and doesn’t give much dialogue. This book feels like it more closely follows the screenplay. As a result, the sadder moments are more impactfull (I teared up a few times) and the ending has more weight. If you’re an adult fan interested in knowing the story before seeing the film, I recommend this one above the rest.

Cinderella: A Night at the Ball 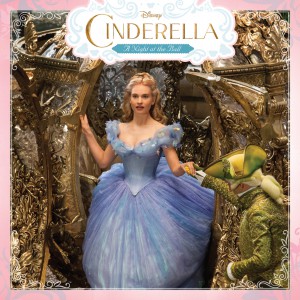 This thin, 28 page picture book by Rico Green uses images from the film to tell the story. While the title suggests that it is all about the ball, it starts with a quick retelling of what came before and includes a brief recount of what happened after. It’s geared towards children 3-5, but that’s if a parent is reading it to them. I’d say the reading level is more appropriate for 1st through 3rd grade, but with such opulent images from the film, it can easily be enjoyed by anybody. 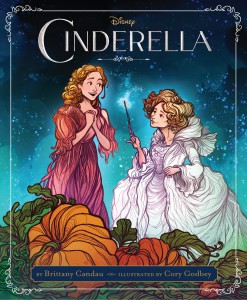 This hardcover picture book by Brittany Candau features the same illustrations by Cory Goldbey, but on larger pages. It tells the complete story as a rhyming poem. It is recommended for children ages 3 to 5, but like A Night at the Ball, the story would have to be read to that age group. And to make things rhyme, this one features less common words and sentence structure that might confuse children. But it is a very nice storybook version and as an added bonus, it comes with a digital copy. The code can be found inside with simple instructions on how to redeem it.

I was already excited for Cinderella before reading these books, but have greater anticipation for it now after seeing what Disney has done with the story. It’s more faithful to the animated classic than I was expecting, but the meaning of the story has greater impact in this retelling. All of the movie tie-in books are well done, but I recommend Have Courage, Be Kind: The Tale of Cinderella to anyone out of elementary school.