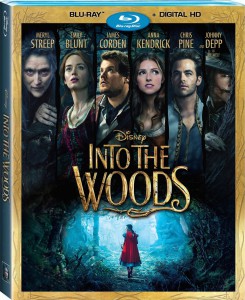 Into the Woods was a risky move for Disney when they planned it as their Christmas blockbuster for 2014. Their lavish production cost a modest $50 million to make, but earned three times that at the box office beating out musical competition from Sony’s remake of Annie. However, while the film boasts some of the greatest fairytale characters of all time, they all find their way to unhappily ever after and the general consensus from Disney fans was mixed.

Stephen Sondheim and James Lapine wrote the musical, which opened on Broadway in 1987 starring Bernadette Peters and was a big success with theatergoers. The dark fairytale made fun of the optimistic ways of these classic characters, but also gave them an ending more in line with real world tragedy. It starts off as escapism, but ends in realism. While the film changed things to make the story slightly less dark (and less inappropriate for children), it’s still the same show. To put it gently, it isn’t my cup of tea.

World’s collide in Into the Woods when fairytale characters are drawn into the dark and mysterious forest. The baker and his wife seek to undo a curse from a witch by searching for three impossible to find items before the third midnight. Their path crosses Jack on his way to sell his family’s beloved cow, Red Riding Hood on her way to grandmother’s house, Cinderella on her way to and from the ball, and Rapunzel who is locked in a hidden tower. All of the characters get their happy ending… but the story doesn’t stop and proceeds to undo it all, leading these beloved characters to tragic endings.

The actors are well cast and give memorable performances, particularly James Corden and Meryl Streep. The sets and costumes are exquisite and were deserving of their Academy Award nominations. The music is decent, with some memorable songs that will stay with you beyond the film. The only thing wrong with Into the Woods is the story, but that’s enough to completely ruin it for me.

However, my personal opinions aside, Into the Woods has a very large fanbase of Sondheim fans. Disney’s Blu-Ray presentation will please all of them with worthwhile bonus features, a beautiful transfer and a digital copy. The Blu-Ray is available on March 24th. On that same day, Disney is releasing a standalone DVD of the film with only one bonus feature (the DVD disc is NOT included with the Blu-Ray).

The film looks amazing on Blu-Ray, with lots of blacks that are expertly presented here. The transfer is flawless, exhibiting great detail. The few moments of bright color, such as Red Riding Hood’s cape, pop off the screen on Blu-Ray.

The main audio option is a 7.1 DTS-HD Master Audio mix that fills all speakers with score and sound effects while most dialogue and singing comes from the front three speakers. However, moments where the full ensemble sing fills all of the speakers and turns your living room into a choral hall. This mix also makes excellent use of the subwoofer during surprising moments.

Disney has assembled a surprisingly nice assortment of bonus features, including a deleted song, plenty of behind-the-scenes pieces, an audio commentary and easter eggs.

Into the Woods is housed in a standard-sized Blu-Ray case with a single disc slot. The disc features the typical blue with white letters (no disc art). The case is housed in a foil embossed slipcover. Inserts include a code for your digital copy/Disney Movies Anywhere/Disney Movie Rewards. There is a promotion to purchase the soundtrack for $8 through DMR after redeeming your code. The other insert is an ad for Disney Movie Club. The digital copy can be redeemed through your choice of iTunes, Vudu, Amazon Instant Video or Google Play. Redeeming through Disney Movies Anywhere unlocks it on three of those providers (Amazon does not participate).

The menu features scrolling character posters to some of the film’s score. The disc opens with ads for Disney Movies Anywhere, Tomorrowland, and Aladdin Diamond Edition. Selecting “Sneak Peeks” from the menu plays ads for Disney Movie Rewards, Once Upon a Time, The Lion King Broadway/Tour and Descendants.

Disney has given Into the Woods great care with this Blu-Ray release. The bonus features are worthwhile and the film looks amazing. However, I don’t recommend that anybody purchase this film without seeing it first as viewers seem to be split between loving it or hating it, with very few landing in the middle.