On Sunday, March 8th, the Paley Center for Media invited the cast of ABC’s Scandal to have a live discussion at the Dolby Theater in Hollywood. Their moderator for the evening was none other than ABC’s late night comedian Jimmy Kimmel, who welcomed Joshua Malina (David Rosen), Darby Stanchfield (Abby Whelan), Jeff Perry (Cyrus Beene), Bellamy Young (Mellie Grant), Tony Goldwyn (President Fitzgerald Grant), Kerry Washington (Olivia Pope), Scott Foley (Jake Ballard), Guillermo Diaz (Huck) and Katie Lowes (Quinn Perkins) to the stage. It was an impressive assemblage of cast members and Kimmel did a great job engaging such a large group during the conversation. This article is a reflection of some of the highlights from the event. 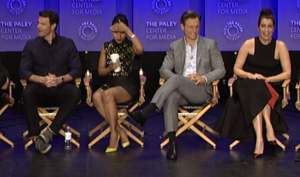 Upon saying her first word, it became clear that Kerry Washington had laryngitis and the audience responded with a sympathetic “awwww.” One of the first questions was regarding pranks on set. It turns out that Joshua Malina is notorious for pulling pranks on his fellow cast members. Katie once didn’t talk to him for a day when he stole her phone and texted “I’m horny” to all of her friends. He made Darby cry once by pushing her chair away every time they called action and her character was supposed to sit down. Tony directed that episode and wasn’t aware of Josh’s pranks until then. Scott Foley made a fart noise before answering every question and Kerry chimed in. “He makes that noise before every take!”

The cast is very greatful to the passionate fanbase, who created the #Gladiators trend on Twitter. They love the couple names they’ve given to the characters, such as “Huckelberry Quinn” However, Jimmy Kimmel feels that “Olitz” needs to be changed to “Fivia.” Out in public, the cast often get asked to lick fans. However, Tony Goldwyn once had it the other way around where a fan licked his neck while taking a selfie with him.

Things got a little awkward during the Q&A session when a fan asked about the real life scandals surrounding the show. He mentioned Columbus Short in his question and members of the audience began to laugh. Kerry responded, saying that the cast is a family for life. She doesn’t celebrate the laughter to the question and explained that none of the cast ever plans to talk about it. My favorite part of the event was when the cast was asked to share their first day memories. Darby remembers discussions of needing to talk faster and the actors were trying to keep up with the pace. Kerry remembers everybody except for Darby was alread cast and it was a mystery as to who would play Abby. It felt like a superhero moment when she joined the team. She also remembers the camera tests (she knew Tony from politics in Washington). They were chatting during the shoot and could hear Shonda and Betsy getting excited behind the camera. She knew then that they must have had good chemistry at that moment. When Shonda Rhimes offered Katie the part of Quinn, she decided to record the moment because she had to fight the network to cast her (they wanted a name). That video was played and it was very sweet. Each cast member was given a background check because Shonda has a “no A-hole policy.”

I expected the cast to know much more than they actually do about where the show is heading. They revealed that they are only one-to-two episodes ahead of the fans at any given time. The cast is never allowed into the writer’s room, but Tony once got to go because he was directed an episode. Shonda told him she felt uncomfortable having him there. The cast joked that Kerry secretly knows things because Shonda will ask her strange questions like “Are you okay running barefoot?” She gets teasers like that, but Kerry never asks follow-up questions because Shonda won’t reply. Tony was once asked what sports he plays. He said “Anything but basketball.” A few episodes later there was a basketball scene for Fitz. He once jokingly told her he could chop wood and suddenly found himself doing it on the show. The thing that was most clear from watching the event is that this cast is a close-knit family. Jeff revealed that his wife is Linda Lowie, who is the casting director for the series. He jokingly thanks her for the part, but also said that his wife didn’t know his character was gay. One evening she was reading a script and started laughing, but couldn’t tell him why. She then had to cast someone to play her husband’s husband. Bellamy said this cast is the nicest, hardest working group of people. They always worry when another series regular actor is added because they don’t want their dynamic to change.

At one point, the cast was asked to say their favorite lines their characters have had to say on the show. Their answers ranged from serious sentimental moments to some hilarious ones and I leave you with their censored answers:

“How could I have been such a coward?” – Fitz

“Barbara Walters is retired so it will have to be Diane Sawyer, but she’s nice.” – Cyrus.