Sold Out Crowd Sings Along with Joy During “Newsies” Movie Screening On Wednesday, April 1st Disney’s El Capitan Theatre opened its doors to a sold out crowd of Fansies for a highly anticipated screening of the 1992 cult classic film “Newsies”. It’s hard to believe this movie was a big flop during its initial release when you see huge lines of people wrapped around the building awaiting entry into the theatre. Many of these audience members were adorning their Newsies caps and wardrobe. The movie got off to a late start since the theatre had to be vacated after an earlier screening of “Cinderella”, but the audience didn’t seem to mind since there were plenty of opportunities to get your picture taken with willing cast members in attendance, including David Moscow who played Davie in the film, Luke Edwards who played Jake, and many others. The energy of the crowd (and cast members) was electric. To introduce the movie, the film’s director Kenny Ortega came out to introduce the cast attending and to thank the audience for their loyal support through the years.

It truly is the passionate Fansies that has made “Newsies” into the hit it is today. After a lackluster box office during its initial run it seemed as though The Walt Disney Company was eager to forget about “Newsies”. But the fans just wouldn’t let that happen. A lot of people’s introduction to the film seems to have been an airing on The Disney Channel or their long warn out VHS copy of the movie. It was the Fansies that demanded the film be released on DVD and they got their way in 2002. The same groups demand later brought the show to Broadway in 2012 making it a Tony Award winning hit.

As the film began the audience roared with cheers often making it difficult to hear the movie. And there was no stopping the audience from singing along with their favorite songs, which seemed to be every one of them. Personally, as a huge Fansie myself it was thrilling for me to see the movie on the big screen for the first time. 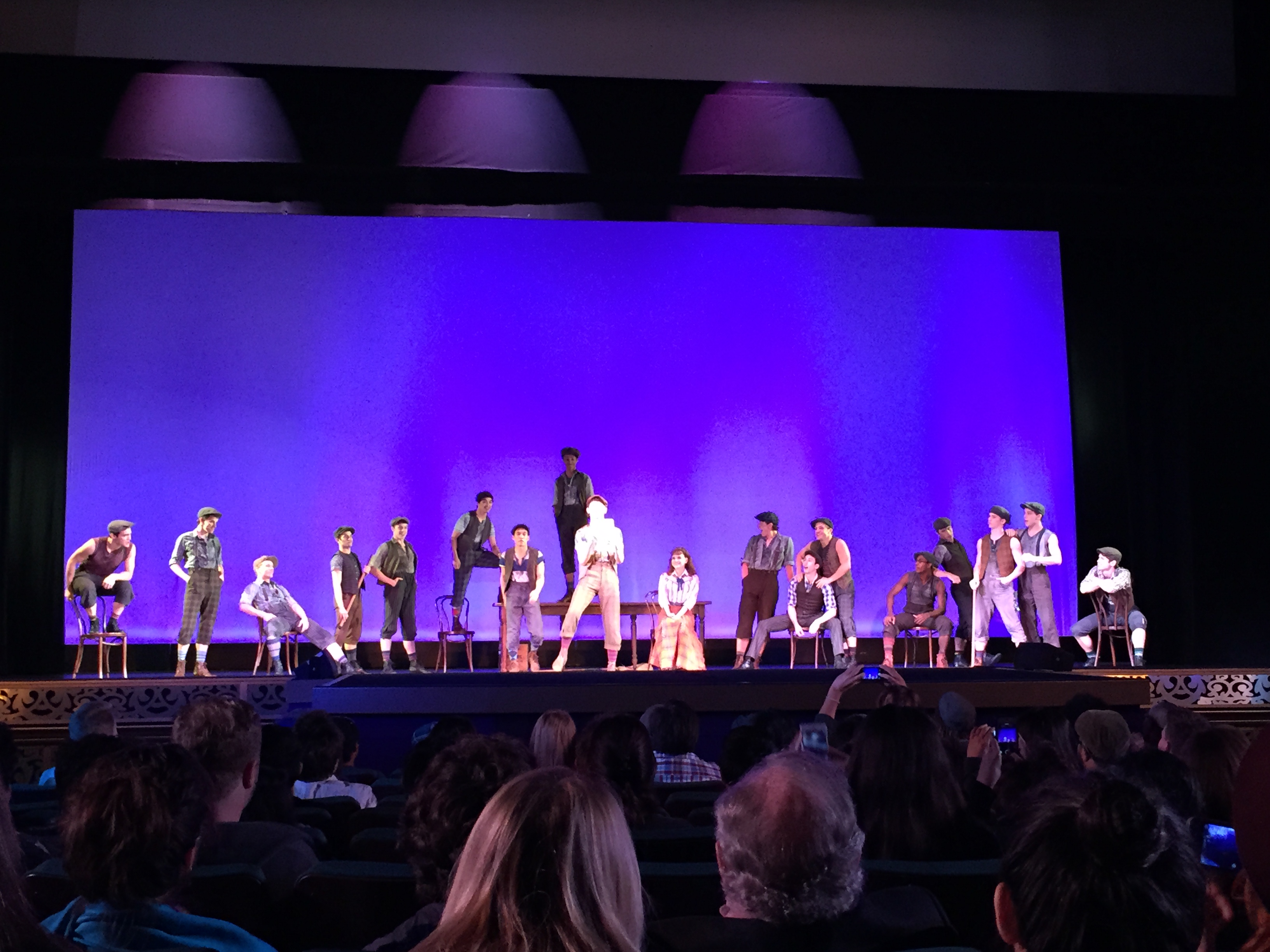 Perhaps the nicest surprise of the night was when the movie ended, the screen rose into the heavens of the theatre revealing the current cast of the First National Tour of “Newsies” now playing in Hollywood at The Pantages Theatre down the street from The El Capitan. As the screen rose the recognizable orchestrations from “King of New York” began to play and the audience was treated with a full performance. Just as we thought the night was ending, we were then given a performance of the irresistible ballad “Santa Fe”. The night concluded with a photo opportunity of the touring theatrical cast and the movie cast in attendance. It was certainly a night to be remembered for any “Newsies” fan. Nobody seemed to be bothered by the fact they were leaving the theatre around 12:30am on a “school night”. This sold out screening simply solidified the fact that “Newsies” fan base isn’t going away any time soon and will continue to “seize the day.”

Jeff DePaoli is an entertainer/producer living in the Southern California area. He is co-host of the podcast “Dizney Coast to Coast”. Visit www.DizneyCoastToCoast.com to get your list of “America’s Hidden Mickeys”. @JeffDePaoli on Twitter/Instagram

Jeff DePaoli is an entertainer/producer living in the Southern California area. He produces and co-hosts the podcast “Dizney Coast to Coast”. Visit www.DizneyCoastToCoast.com to get your list of “America’s Hidden Mickey’s”. Play along with his “Daily Disney Decisions” every day on Periscope and on his weekly Blab game show “A Spoonful of Disney Debate”. @JeffDePaoli on Twitter/Periscope/Blab/Instagram​