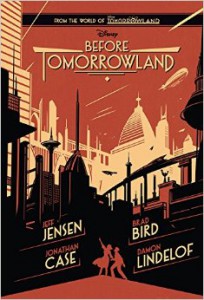 The latest blockbuster inspired by Disney Parks comes out on May 22nd when Tomorrowland becomes a reality on the big screen. Many Disney fans are eagerly anticipating this film and the marketing campaign so far has been pretty creative. “The Optimist” was a social media scavenger hunt surrounding a mysterious “1952” box that was found in the attic of the grandchild of someone who worked for Walt Disney. The contents of the box were displayed at the 2013 D23 Expo, which included documents about plans for a futuristic city and some blueprints for “it’s a small world” at the 1964 World’s Fair. When held under a black light, these blueprints revealed a mysterious basement level to the attraction.

Most Disney geeks know a lot about EPCOT, Walt’s last great dream for a progress city that never came to fruition. The premise of Tomorrowland is this: What if some of the world’s greatest thinkers came together in secret and succeeded in creating a Utopian city of the future? It’s a pretty interesting subject and in anticipation of the film, Disney Press has published a prequel novel to create even more hype.

Before Tomorrowland takes place decades before the upcoming film, which appears to be set in the present. With the exception of the prologue and epilogue, the entire story takes place over a three day span from July 2nd to July 4th, 1939, in New York City. New York’s first World’s Fair is in full swing with a focus on the future. Lee and his mother have arrived in NYC for the “World Scientific Convention.” Clara is a sci-fi geek and her son Lee has been dragged along because of her brain cancer, which causes her to become weak often. At the convention, they are handed a comic book about a city of the future with a pair of 3D glasses. But the glasses turn out to be a guided tour of a city of the future by a mysterious company called Plus Ultra.

The story switches between interested parties often, keeping things exciting as the story progresses. Lee and Clara find their tour hijacked by a robot, a human child named Henry who has been on the run from the mad-scientist who imprisoned his mind in the robotic experiment. Henry believes Plus Ultra is an evil corporation and is on a mission to destroy them. He is being trailed by the evil scientist, Dr. Rotwang, a former Plus Ultra employee who has taken up with the Nazi party to steal Plus Ultra’s most heavily guarded secrets. With Plus Ultra’s big reveal of “The World of Tomorrow” ruined, they send their best pilot, Amelia Earheart, to retain Lee and Clara and stop their enemies from destroying the project they’ve been working on for decades.

This prequel tells a great story that has increased my interest in the upcoming film. Many historical figures are featured in the novel, a fun “who’s who” game that unfolds as the story progresses. Disney fans will be waiting with anticipation to find out Walt’s involvement, but that will mostly have to wait until the film comes out (I presume). But his name is mentioned once in this book, so keep a close eye out for it. World’s Fair fans may be interested to know that the foundation for the 1939 fair was used for the 1964 World’s Fair, where Walt Disney presented four attractions, including “it’s a small world.” With this knowledge, it becomes easy to connect the dots between Plus Ultra’s exhibit, the blueprints from “The Optimist,” and the Japanese trailer which shows a young boy finding his way into the attraction’s basement.

Beyond Tomorrowland is a quick read, with 310 pages in a young-adult spaced font. The back of the book features the 20-page full-color comic that Lee and Clara receive at their convention as an added bonus. Four authors are listed, two of which are director Brad Bird and film co-writer Damon Lindelof who get credit for the story. The book’s writer is Jeff Jensen, who writes for Entertainment Weekly and has also written a crime novel. The comic in the back is written by Jonathan Case.

If you’re interested in Tomorrowland, I highly recommend reading Before Tomorrowland. It adds a lot of back story that is probably absent in the film and shouldn’t spoil any major plot points (I’m still unsure of what is going to happen in the movie). If nothing else, it should make you more excited for May 22nd. I personally can’t wait to visit Tomorrowland in theaters.