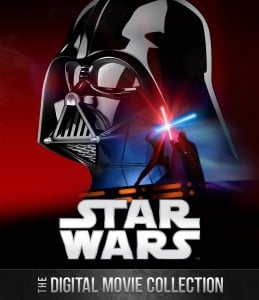 “A long time ago in a galaxy far, far away…” If you’re a Star Wars fan, those words are chilling. They set the tone for the adventures that are about to ensue in each of the saga’s six films. However, if you’ve been on this planet for several decades, you’ve already bought Star Wars, probably multiple times on different formats. I personally owned it twice on VHS, twice on DVD, and now on Blu-Ray. To add the collection digitally doesn’t seem like a wise decision, especially considering that the digital version is the same restoration found on the Blu-Ray. On April 10th, do I really need to have Star Wars at my fingertips everywhere I go?… maybe.

Disney and Twentieth Century Fox knows this dilemma that will plague every Star Wars fan: to buy or not to buy? Or as Master Yoda might say, “Buy or buy not.” That’s why they’ve tried to add a few incentives to sweeten the deal. I’ve analyzed them and hopefully this will help you decide if you need to own these films digitally or will remain satisfied with what you already have.

What’s new? Disney has assembled 12 new bonus features, two for each film. The total amount of never-before-seen bonus material amounts to 66 minutes. These new features fall under two headings: Conversations and Discoveries from the Inside. 27 minutes are devoted to the prequel trilogy, while the original trilogy gets 39 minutes of new content. Topics of the Conversations series are “Doug Chiang Looks Back” (I), “Sounds in Space” (II), “The Star Wars that Almost Was” (III), “Creating a Universe” (IV), “The lost Interviews” (V) and “The Effects” (VI). Topics of the Discoveries from the Inside series include “Models & Miniatures” (I), “Costumes Revealed” (II), “Hologram & Bloopers” (III), “Weapons & the First Lightsaber (IV) and “The Sounds of Ben Burtt” (VI).

What’s returning? Under the heading of Legacy Content comes some bonus features previously available. Most of the prequel content was left off the recent Blu-Ray release, so it’s nice to see these features returning. The Phantom Menace has the feature-length documentary “The Beginning” (66 minutes), eight deleted scenes (15 minutes), and the theatrical cut of The Podrace scene (previously unavailable on disc, 12 minutes). Attack of the Clones has its feature-length documentary “From Puppets to Pixels” (52 minutes), “State of the Art: The Previsualization of Episode II” (23 minutes), “Films are not Released, They Escape” (25 minutes), six deleted scenes (11 minutes), and “Visual Effects Breakdown” (3 minutes). Revenge of the Sith retains its long documentary “Within a Minute” (1 hour, 18 minutes), “The Journey” part 1 and 2 (12 minutes), six deleted scenes (6 minutes) and the ILM Siggraph Reel (4 minutes).

What’s missing? Too many items to list them all, but several previously released deleted scenes for the prequels are mysteriously absent. None of the commentary tracks are offered in the digital version either. The biggest omissions are some of the vintage making-of documentaries that were on the Blu-Ray. They oddly included the one for Jedi, but not for the other two original trilogy films. And Empire of Dreams, the excellent 2004 documentary about the making of the original trilogy that was 2.5 hours long. Since the bonus features are streaming and disc space isn’t an issue, I feel like nothing should have been left off. This could have, and should have, been the ultimate bonus feature release thusfar.

If you own Star Wars on Blu-Ray, than you already own the films in the best available format. Does digital content look better than Blu-Ray? No, but to my eyes it comes fairly close. Blu-Ray offers larger file sizes and a higher bitrate than Digital HD can compete with, which is why it is the preferred format. And if you buy a streaming version of the films, then you lose out even more since streaming quality can vary during playback. That’s why of the digital provider options, iTunes is the best because you can download the films in 1080p.

Ouch! This part hurts. Depending on the time of year and various sale prices, the complete saga on Blu-Ray can be purchased from $60 to $90 (nobody should pay full MSRP of $139.99). For some reason, not all retailers have been given the same pricing options. Specifically iTunes, who is unable to sell them as a collective 6-film set. Your only option through iTunes is to buy each film individually for $19.99 each ($119.94 total!!!). I’m sure there’s some politics here between either Disney, Fox, or Apple (or a trifecta of all three) because literally every other e-tailer (Vudu, Google Play, Amazon Instant Video and X-Box Video) are offering the films bundled together for $89.99.

$89.99 for six films I already own? I only truly love three of them, like one of them, and tolerate the other two, is it worth that much? This price is also on the higher end of what you should expect to pay for the films on Blu-Ray, where they look better. Let’s compare apples to oranges by looking at other movie saga collections and how much those studios charge for them digitally.

Do you see what’s wrong there? WB says each Harry Potter film is worth $9.37, Paramount says each Star Trek film is worth $5.59, and Fox says each Dreamworks Animation film is worth $9.39. All are under $10 and my argument is not that Star Wars is in the same category as these films because let’s face it, nothing really compares to Star Wars. But $14.99 for each film when I can get much more bang for my buck by choosing a different film collection feels like the price is still too high. Especially when everybody and their tauntaun already owns at least two copies of these films.

Anyone familiar with DMA knows that if you buy your Disney movies from either iTunes, Google or Vudu, you unlock the film in all three providers through your linked DMA account. This makes the price easier, but there’s a catch. Fox owns the rights 100% for A New Hope and either wanted too much money or wouldn’t agree to let Disney host the film on their servers. Therefore, if you buy the complete set from one digital provider, you only unlock the other 5 films elsewhere.

This is incredibly unfortunate if you, like me, would prefer to have the films on iTunes. You should be able to take advantage of the $89.99 deal though Vudu or Google to get the films cheaper in iTunes, but A New Hope won’t transfer there if purchased elsewhere. Granted, it would still be cheaper to buy the films at $89.99 and then buy A New Hope separately on iTunes for $19.99 ($109.98 compared to $119.94!!!), but that’s still way too much to pay for these films.

The most appealing part of buying Star Wars digitally for me would be to have all six films in iTunes and streaming through DMA. The fact that iTunes isn’t allowed to offer a discounted price and that A New Hope won’t transfer to DMA makes the whole package less appealing. The bonus features assortment is nice, but I kept my DVD’s since most of those features weren’t on the Blu-Ray and 66 minutes of new content isn’t worth the total price of the set. If it ever drops to a sale price of $60, Disney/Fox can have my money. But until then, I’ve decided to not endorse this release.

Digital media seems to be the final frontier until science can develop a way to embed video files in our brains so we can watch them on the back of our eyelids. Is this the final time Star Wars is going to be released digitally? Absolutely not. If rumors are true, Disney is working on restoring the original, pre-Special Edition version of the films. So don’t feel like you’re missing your one-and-only chance to own these films. Disney also loves to discount titles surrounding other similar releases, so we may even see the price of the digital collection drop to an acceptable level when The Force Awakens comes out this December. May the force be with you.