Disney’s live-action version of Cinderella recently crossed the $400 million mark at the global box office. I figured they would tell the story again someday, but never dreamed it would come just a month later. On April 17th, Disney debuts a new film about a young woman born into poverty in her kingdom. She faces off against some ugly sisters and against all odds, ends up becoming royalty. Oh yeah, did I mention she’s a monkey? 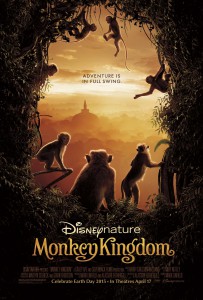 Disneynature’s latest Earth Day celebration is Monkey Kingdom. Set in the jungles of Sri Lanka, the film tells the story of a kingdom of macaque monkeys. Their fascinating social hierarchy features a king named Raja (an alpha male who fought his way to the top) and three red faced sisters who are deemed royal by birth. The royals live on the top branch of a fig tree, basking in the sun. The higher you are on the tree, the higher your rank in the kingdom. On the bottom branch is Maya, who was born into the lower class and is forced to stay that way.

One day a loner monkey named Kumar arrives and courts Maya, despite Raja’s attempts to stop him. Shortly after, Kumar is driven away from the kingdom and Maya gives birth to their son Kip. She struggles to get nutrition to feed her son since there is little food left for the lowest ranking monkeys. She becomes Kip’s only line of defense against bullying higher ranking monkeys without a father to protect him. But against the odds she and Kip not only survive, but find themselves thriving when Kumar returns to the kingdom and ascends to the highest rank.

Like all of Disneynature’s films, Monkey Kingdom features some breathtaking imagery and the moments the filmmakers were able to capture are remarkable. Nature tells the story in these films, but this one ends up being more entertaining than previous endeavors. There are a few scenes where the monkeys are forced to enter civilization and I do question if the filmmaker’s intervened. While crashing a child’s birthday party, human’s are surprisingly absent from the kitchen and the camera’s were able to get inside to catch all of the fun. There is also a moment where they steal from a busy outdoor market and nobody seems to notice or object. But other than that, all of the action seems real and uninterrupted. 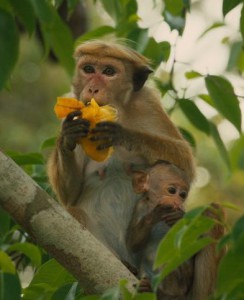 Tina Fey provides the narration in this film, adding insight to what Maya might be thinking while still providing great information about the macaques. The narration has the perfect balance between humor and drama. This film also has a more lively soundtrack than previous Disneynature films. One of the first songs in the film is “Hey, Hey We’re the Monkees.” And given the mischievous nature of these animals, there are some truly hilarious moments.

How does Monkey Kingdom compare to past Disneynature films? It has more humor than the rest and a great deal of heart. There is enough action to keep things exciting, including a tiger and a seven-foot monitor lizard, but the biggest danger comes from other monkeys in Maya’s kingdom. It is less violent than previous films, but there are still two monkey casualties that occur. I personally found this to be the most entertaining Disneynature film so far, and it has become my personal favorite (a close second is the direct-to-video film The Crimson Wing).

If you see Monkey Kingdom opening weekend (April 17th through April 19th), Disney will donate a portion of your ticket purchase to Conservation International to protect monkeys and other endangered species. Before the film starts, there is a short video about how Disneynature has helped the planet with their previous films, including footage of the trees planted from Earth and the other programs that have benefited from these films so far. It’s a perfect way to celebrate Earth Day while enjoying an amazing film and helping to protect the homes of animals like Maya and Kip.

I give Monkey Kingdom 5 out of 5 Jackfruit.