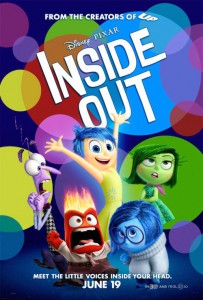 Is it nature or nurture that shapes our personality? That’s a question that scientists have disagreed on since the beginning of the argument. But in Disney Pixar’s latest animated blockbuster, we get to go inside the head of a young girl named Riley to meet her emotions. They sit in a command center monitoring all of her activities and help influence her decisions. Riley’s emotions are Joy, Sadness, Fear, Anger and Disgust, all manifested as colorful beings that are only capable of expressing the emotion of their namesake.

Riley has five core memories which power the different aspects of her personality, each of them controlled by Joy. She is the group’s leader, who works tirelessly to ensure that Riley has a happy life. But when Riley’s parents move her from Minnesota to San Francisco, Sadness begins to take over. In an attempt to block a sad core memory from being stored in Riley’s mind, Joy accidentally sends all of the core memories deep into Riley’s long-term memory. She and Sadness must set out deep within Riley’s mind to try and restore things to the way they used to be. Worst of all, Fear, Anger and Disgust are left in charge of command.

As you can see, the premise of Inside Out is pretty clever and original (even if you’ve experienced Epcot’s extinct attraction Cranium Command). Like most Pixar films, the main characters are extremely likable and memorable. The voice casting is superb, with Amy Pohler providing the voice of Joy. While Mindy Kaling and Bill Hader are great as Disgust and Fear, Lewis Black steals most of the big laughs as Anger. But the character that will melt your heart and require a plushy purchase to cuddle with is definitely Sadness, voiced by Phyllis Smith.

Pete Docter directed this film, his third Pixar feature after Monster’s Inc. and Up. It’s hard to compete with those two films and Inside Out is the weaker of his three. It certainly has an emotional element (as it should… it’s about emotions), but didn’t tug on my heart strings the same way Sulley and Boo or Carl and Russell did. In addition, both of Docter’s previous films were solid from start to finish without any slow downs. With Inside Out, once the premise is established it takes its time navigating to a predictable ending. Granted, it does have a lot of fun along the way with some memorable jokes and locations, but it eventually wears thin.

Inside Out is the first animated film of the summer to be released and families looking for a fun time at the movies won’t be disappointed. It has a great sense of humor with jokes that are universally appealing. There are some jokes that will get bigger laughs from adults, but they’re the type where if a child repeats it in public, you won’t be embarrassed. For longtime fans of Pixar, it’s definitely a giant leap in the right direction after a two year hiatus from the studio that once lead the box office in animated hits. I wouldn’t go as far as the herald it as a “return to form,” but it definitely comes close.

I give Inside Out 4 out of 5 Core Memories.