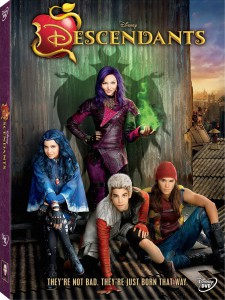 “I’m rotten to the core.” …No, not me, I’m more of a good witch myself (although my core could definitely use some work). I’m talking about the mantra and memorable introduction of the “Descendants,” aka the children of Disney villains in Disney Channel’s latest ratings juggernaut, Descendants. With an impressive marketing campaign and a record-breaking premiere on July 31st, it’s no wonder that Descendants debuted so strong. But when the quality of the product is as good as this, it’s easy for it to become a phenomenon (doo doo doo doo doo).

Like High School Musical and The Cheetah Girls, Descendants is a DCOM musical that is formulaic, yet memorable. Kenny Ortega, the talented director/choreographer whose biggest success has come from his Disney work (Hocus Pocus, Newsies and the High School Musical trilogy), has done it again. With some familiar young talent (Dove Cameron, Cameron Boyce), fresh faces (Sofia Carson, Mitchell Hope) and actors adults already love (Kristin Chenoweth, Kathy Najimy) it offers a little something for everybody.

When prince Ben invites the children of a few villains imprisoned on the Isle of the Lost to attend his royal prep school, Mal, Evie, Jay and Carlos find themselves in a world far removed from the one they grew up in. With a secret plan to avenge their parents (Maleficent, Evil Queen, Jafar and Cruela DeVil), these four teens will discover that the line between good and evil is blurry one. They will struggle between doing what’s right for themselves versus doing what their parents expect them to do. Which side will they chose?

Descendants was available on DVD the same day as its television premier, July 31st. The DVD features a bonus bracelet and a small assortment of bonus features. While Disney has not made the film available on Blu-Ray, it is available in HD from digital media retailers like iTunes and Vudu.

Descendants looks pretty good on DVD, where it is presented in widescreen 1.78:1. However, if you’re a videophile and are looking to see every bit of detail, you will definitely want to chose the digital HD version instead.

While the English track is presented in 5.1 surround sound, it makes little use of the full spectrum of sound. Other audio options are French and Spanish 2.0.

Descendants is housed in a standard DVD case with a holographic embossed slipcover. The disc is white instead of grey, which is the new normal for Disney DVDs. Inserts include an Isle of the Lost bracelet on a cardboard backing, a Disney Movie Rewards code (100 points) and an ad for Disney Movie Club.

The menu features a CG map of Auradon. This DVD is enhanced with Disney Fast Play. If you let it run its course, it plays ads for DisneyNature’s Born In China and Aladdin Diamond Edition. After the film, it plays all of the bonus features in the order listed under that section. It is followed by additional ads for Disney Movie Rewards, K.C. Undercover and Girl Meets World.

Descendants is one of the best DCOMs in years and is definitely worth checking out for Disney fans young and young at heart. While the bonus features are mostly unwatchable, the film itself is worth adding this to your collection. If you want HD, go digital. But for standard definition, you can’t beat this DVD release.
iTunes